The most recent poll of the Republican field in Iowa by Suffolk University shows Trump leading the field, with 19 per cent of the vote, against Scott Walker’s 15 per cent. That's is a reversal of  two previous polls, which had Walker ahead of Trump.

Read more: Donald Trump is the leading Republican candidate in the polls

Trump also leads in New Hampshire with 18 per cent, a poll from the Boston Herald and Franklin Pierce University found. Meanwhile Jeb Bush, former governor of Florida, has 12 per cent.

What do these polls mean? The suggestion is not only that Trump's popularity wasn't dented by the Republican debate, which many expected to push him out of the race altogether – but also that he appears to have become more popular.

But what of his many gaffes? Below is a poll of  polls for the Republican Presidential nomination showing the five frontrunners, using data from Real Clear Politics. Trump’s most controversial comments have been added. Far from losing support after each statement, Trump rises in the polls in the days following his remarks. 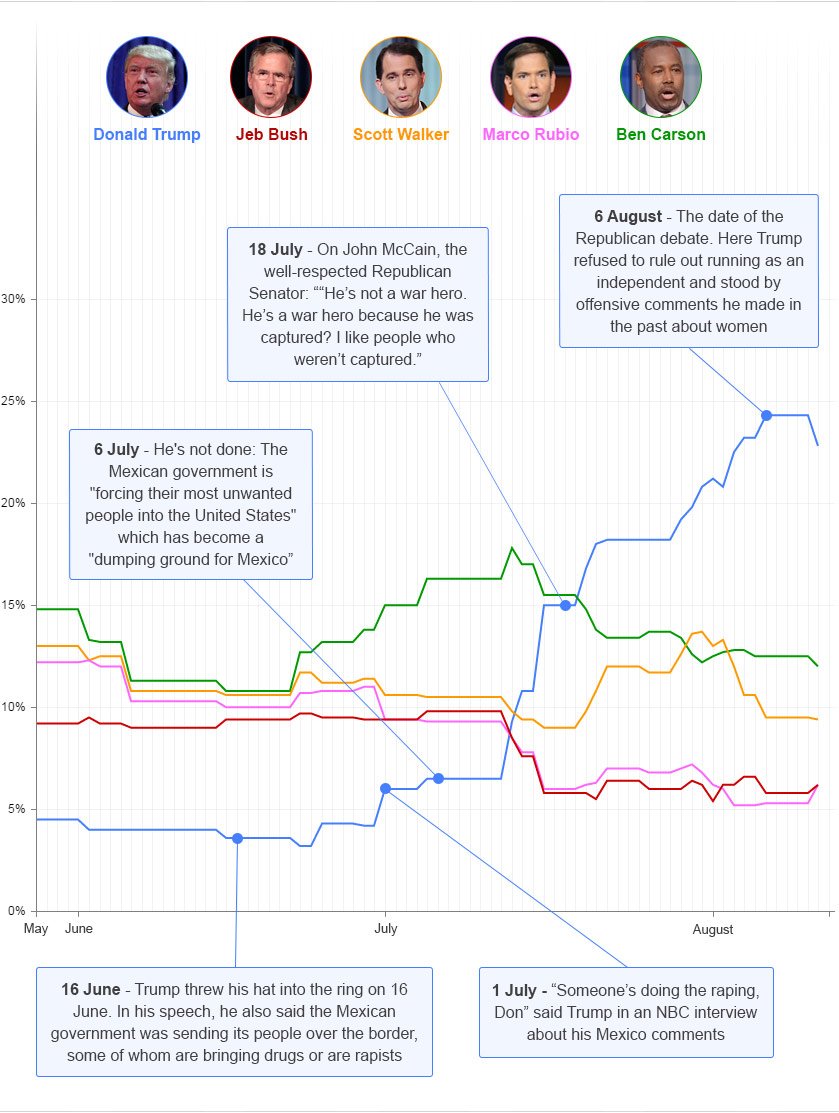 For a while Trump seemed to have a problem with the Mexican government and Mexican migrants entering the US, which seemed to do him some favours in the polls.

Later, he took issue with Senator John McCain, alluding to the prominent Republican’s time as a Vietnamese prisoner of war, which angered many Republicans, including fellow candidates.

Then came the date many people expected would be Trump’s downfall: the GOP debate. Fox News’ moderators took a strong line with candidates, including Trump, who was the only candidate to refuse to rule out running as an independent. If this hurt his chances of being the nominee, it didn’t show in the polls.

Perhaps he’ll do even better now he has entered the foreign policy debate. His plan to overcome the Islamic State? “We go in, we knock the hell out of ‘em, [we] take the oil,” he told Fox News.