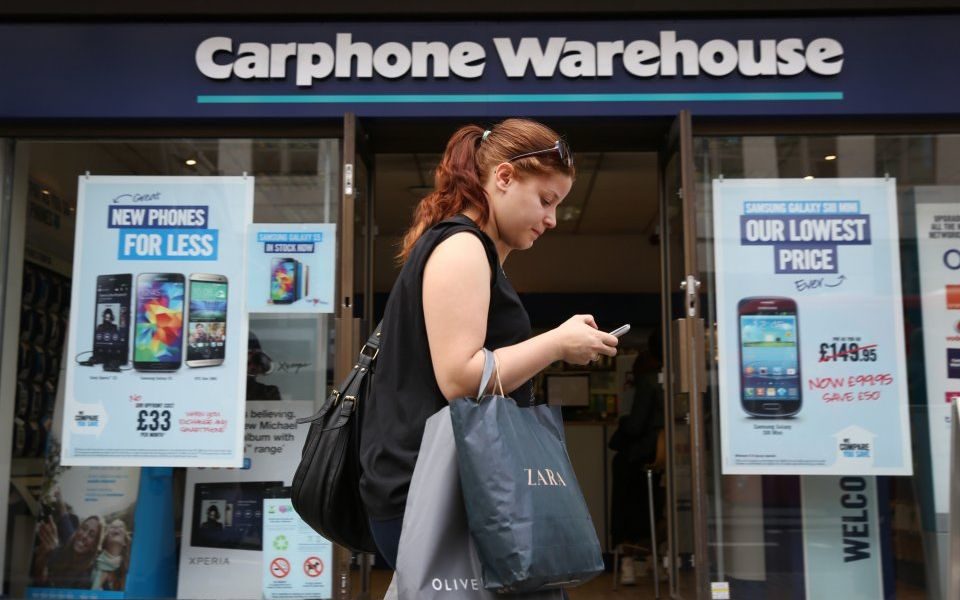 Dixons Carphone sank to a huge loss in its half-year result today, as a £500m writedown in its Carphone Warehouse division weighed the company and its share price down.

Dixons swung to a £440m loss for the six months to the end of October after paying out £490m in impairment charges for a restructure of its Carphone Warehouse arm, compared to a £54m profit before tax last year.

That compares to an underlying profit before tax of £50m for the firm, down from £73m in the same period of 2017.

Revenue grew one per cent year on year, or three per cent on a like-for-like basis, to £4.89bn.

Cash flow dropped by one third to £116m however as Dixons introduced new working capital phasing, while net debt piled up, from £206m last year to £274m now.

However, investors lost 39.7p per share, a far cry from their 4.5p earnings this time last year, while the dividend fell from 3.5p last year to 2.25p this year.

Shares fell by 10 per cent in early morning trading on the news.

Dixons’ huge one-off loss relates to its restructure as it attempts to wean itself off its reliance on the troubled high street, which failed to benefit from November’s Black Friday spending spree.

“We're focusing on our core, and on four things that matter most: two big profitable growth opportunities in online and credit; revitalising our mobile business; and giving customers an easy experience,” Baldock said.

“We'll deliver these through capable and committed colleagues, working in one joined-up business, with strong infrastructure.

But he added that Dixons’ restructuring plan under new boss Alex Baldock could change its fortunes.

He also pointed to an employee share scheme Dixons announced, allowing staff with a year’s service to get up to £1,000 in company shares.

“That’s a sensible move as the company looks to differentiate itself from online rivals like Amazon, with better in-store service.”

"We believe that Dixons Carphone is now on the path to sustainable success. We have set a clear long-term direction that will deliver more engaged colleagues, more satisfied customers and a more valuable business for shareholders.

“We have powerful strengths, as a growing market leader with amazing people and capabilities no competitor can match. Our plan builds on those strengths. We're focusing on our core, and on four things that matter most: two big profitable growth opportunities in online and credit; revitalising our mobile business; and giving customers an easy experience. We'll deliver these through capable and committed colleagues, working in one joined-up business, with strong infrastructure.

“We're underway and investing in all of these, including giving our colleagues at least £1,000 of shares, making every colleague a shareholder. We strongly believe aligning and energising the business behind our strategy in this way will benefit customers and shareholders.

“There are headwinds and uncertainty facing any business serving the UK consumer, we've had our own challenges, and our plan will take time. But, with this plan, we can now see the way to unleashing the true potential of this business. We believe in our plan, are underway making early progress and determined to make it a lasting success.”