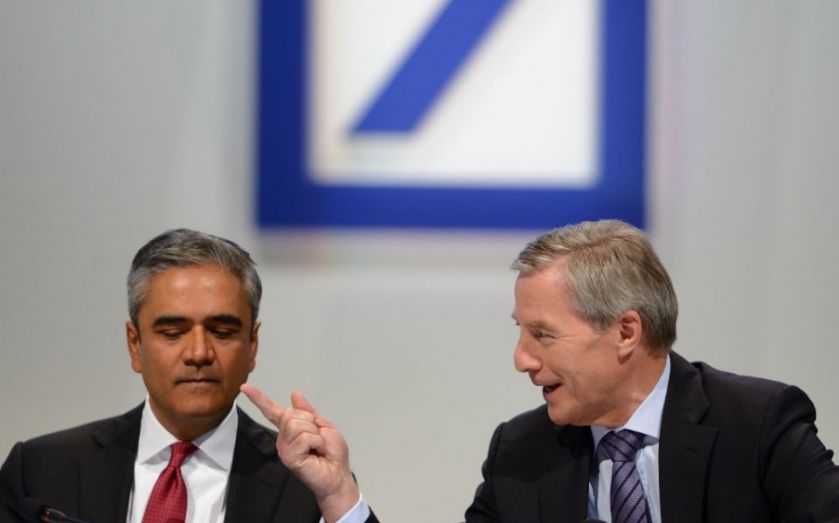 The co-chiefs of Deutsche Bank are resigning amid increasing pressure from investors over their management of a series of problems to have beset the bank.

The German bank was hit with a £1.7bn fine over Libor manipulation in April, which co-CEO Anshu Jain took ultimate responsibility for, while fellow co-CEO Juergen Fitschen is embroiled in a legal battle with the Kirsch media group.

Jain will leave the bank at the end of June and will remain as a consultant until the end of the year. Former UBS finance chief John Cryan has been named his successor.

Fitschen will remain in place until the bank's next AGM in May 2016, when Cryan will become the sole chief executive.

The pair, who have been in charge since 2012, remained in place until now despite facing shareholder dissatisfaction at its AGM less than a month ago after revealing its strategic plans.

"What is my way of responding? By backing up that taking of responsibility to ensure it never happens again. Now maybe that is good enough for you, and maybe it is not. But it is the best I can do,” said Jain in April in response to the Libor fine, when he also ruled out stepping down.

"On behalf of the supervisory board, I would like to express our gratitude and respect for the contributions that Juergen and Anshu have made to our bank," said board chairman Paul Achleitner.

"Due to their decades of commitment, Deutsche Bank attained its leadership position. Their decision to step down early demonstrates impressively their attitude of putting the bank’s interests ahead of their own.

“We are pleased to have appointed John Cryan as co-chief executive. John is not only a seasoned banker with extensive experience in financial matters but also espouses the professional and personal values required to advance Deutsche Bank and Strategy 2020. He knows the bank well, and we are convinced that he is the right person at the right time. We wish John and all of our employees success in this important next phase for the bank," he added.