DEMAND for housing continued to rise through August, as warnings over the sustainability of chancellor George Osborne’s Help to Buy scheme continued to roll in.

According to Hometrack data out today, demand continued to rise last month, with 1.1 per cent more buyers registering with agents, and a 0.4 per cent hike in prices from July. The results buck the trend of a modest downturn for the property market in August, with the seasonal lull of the last three years appearing to vanish.

Yesterday, Westminster think tank the Adam Smith Institute also launched a report suggesting that the Help to Buy scheme will continue to drive up demand without improving access to housing.

Research director Sam Bowman commented: “Making taxpayer-subsidised handouts to homebuyers will only drive further house prices up, risking a bubble, improving access for a select few but making housing even more unaffordable for most people”. 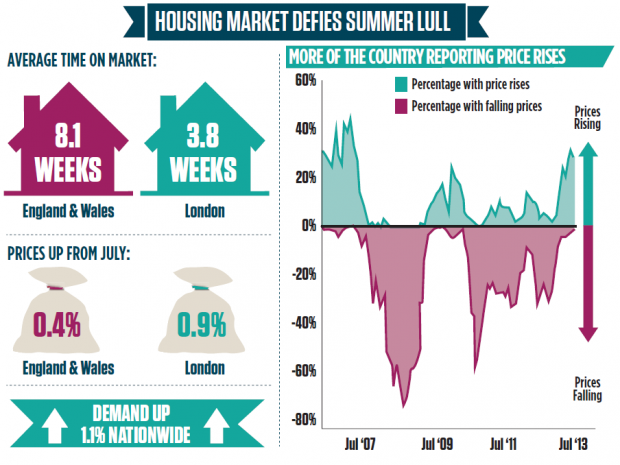 Osborne defended the government’s policies on housing in a BBC interview yesterday, insisting that outside of central London, there were no signs of a boom in house prices.

According to Hometrack, the climbing number of transactions is still most visible in the capital. While  the average home sold in August had been on the market for 8.1 weeks, in London that figure is only 3.8 weeks. Similarly, prices through the city are rising at more than twice the speed of England and Wales generally, with increases of 0.9 per cent and 0.4 per cent respectively.

The Intermediary Mortgage Lenders Association also announced today that it does not expect new mortgage stress tests to have a notable effect on the rising activity in the housing market. The tests are designed to ensure that borrowers will still be able to afford repayments if interest rates rise.

Only seven per cent believe that the tests will have a significant effect, while nearly three quarters are satisfied that they will not prove a roadblock to lending, it said.