Following some dire headlines you might rightly wonder why the share prices of UK retailers have recorded double-digit gains this year (see graphic, below). Surely the relentlessly downbeat mood music from the mainstream media (and pessimism among analysts) is confirmation that the UK consumer is in full retreat, and consumer-exposed sectors are in deep trouble? Well, actually this could be looked at differently.

The gap between the perception of how retailers are trading and their actual performance appears to be a classic case of “confirmation bias”, which is the human tendency to seize on things that confirm pre-existing beliefs. Rather than being dire, trading can perhaps be better summarised as “tough but not getting any worse”. Slowly the message is getting through, driving powerful share price recoveries of the kind seen this year.

This gap between perception and reality has been apparent for a while – last spring it was possible to discern improving revenue and margin trends as pressures facing the UK consumer began to ease. However, it’s the profit warnings and administrations which continue to grab the headlines while broker “sell” recommendations remain numerous. Expectations are sufficiently low to set the scene for further recovery. 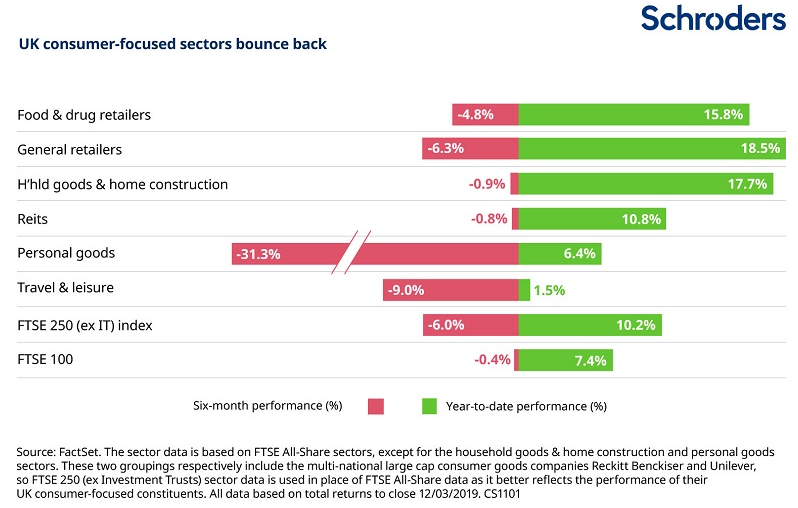 Recent surveys indicate that UK consumers are more confident about their personal economic situation than about the country’s general economic prospects. It appears that Brexit uncertainty has yet to have much of an impact on consumers’ outlook and overall household spending. In fact, spending rose by an estimated £52.5 billion in 2018, following similar rises in prior years (source: Lazarus Economics). While spending on vehicles has fallen for structural reasons, UK households have spent more on clothing, furniture, restaurants and their pets in each of 2017 and 2018.

A strong jobs market, higher wages and tax changes appear to have underpinned spending. Wages are growing at the fastest rate since 2008, outstripping the rate of inflation which has moderated, falling to a two-year low in January.

Ratings out of kilter

Towards the end of 2018, a number of consumer-focused sectors, including UK general retailers, “de-rated” significantly in excess of the wider market. In other words their shares fell sharply without any marked change in underlying earnings expectations as investors became concerned there could be further bad news to come. This exacerbated a trend for UK domestic companies to underperform UK overseas earners, which has been going on since 2016.

In the event, the trading updates since the start of 2019 have not borne out these fears. A number of the more challenged retailers reassured that trading had not deteriorated further, although headlines such as “Mothercare woes deepen as sales slide” gave no hint of this. Meanwhile, several specialists, for example Pets at Home, Dunelm and JD Sports, reported strong same-store sales growth, which makes sense given what we know about household spending in certain sectors.

Others enjoyed sales recoveries following disruption caused by the warm weather last year, including DFS Furniture and Associated British Foods’ Primark stores in the UK. Meanwhile, Tesco reported a very good Christmas, while it has been a record results season for the UK housebuilders. But, with expectations so low, the mood didn’t need to lift much for shares to bounce back.

There has historically been a close correlation between real wage growth and retail sales (see graphic, below) and labour market data from the Office for National Statistics suggests that the backdrop for wages remains supportive. The UK unemployment rate is at its lowest since the 1970s, although business investment has fallen against the backdrop of Brexit uncertainty and we are closely monitoring the impact on the jobs market.

Consumers should also get a boost to their disposable income this year from tax changes announced in last autumn’s Budget, in part funded by an improvement in the UK’s fiscal position as tax revenues have been strong. The chancellor significantly loosened the purse strings, with the Budget described by the Office for Budget Responsibility as the “largest discretionary fiscal giveaway” since the economic advisory body was created in 2010. Tax revenues remain buoyant into 2019. As a result of these trends we are cautiously optimistic about 2019. 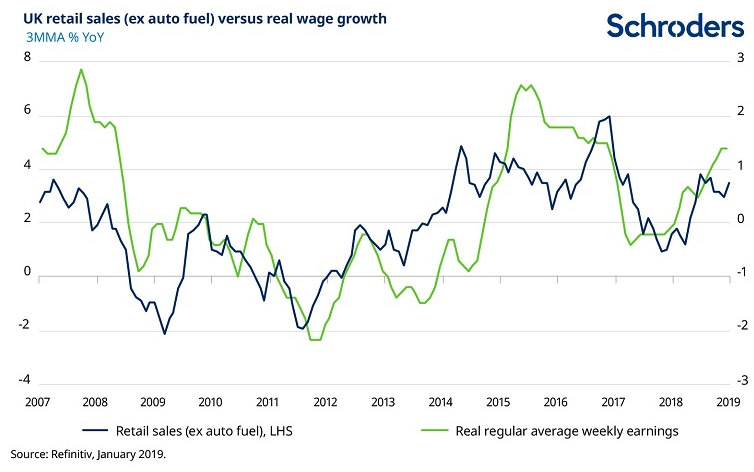 Clarification over the UK/EU relationship could potentially be a catalyst for overseas investors to reconsider the merits of the UK equity market. Many have held back investing in UK shares because of Brexit uncertainty.

The negativity of international investors towards UK equities is entrenched – global fund managers have been consensually “underweight” the UK for three years, according to the Bank of America Merrill Lynch’s global fund manager survey. Investors are said to be underweight an asset class when they are allocating less capital to it than would normally be expected.

Should the tide turn and capital flow back into the UK, the more domestically focused mid cap equities, home to many of the UK’s quoted general retailers (and other consumer focused sectors including housebuilders, property trusts and pubs, restaurants and travel companies) could do relatively well. The scope for any potential recovery looks good considering that UK mid caps have risen 21.7 per cent over the past three years(FTSE 250 (ex Investment Trusts) index), versus 31.6 per cent from the FTSE 100 (Refinitiv, sterling total returns, to close 12/03/2019).

Some major bricks-and-mortar retailers have suffered sharp sales slowdowns resulting in multiple profit warnings last year and this. But among businesses that are better adapting to the structural shifts reshaping the high street, the news has been encouraging; many have capitalised on their competitors’ weaknesses.

A number of the specialists have well-developed “multi-channel” strategies, having discovered the most effective blend of in-store and online offerings, and delivered growth as a result, with Dunelm being a good case in point. Meanwhile, innovative new management teams at several of the other niche retail operators are repositioning their businesses with the aim of turning performance around.

The financial fundamentals of many UK retailers are solid: attractive dividend yields are well covered by earnings and therefore look sustainable. Retail rents, which are a significant cost component of bricks and mortar retailers, are falling, which should help to protect these companies’ cash flows.

Market participants are overlooking the positive impact of falling costs, as alluded to in comments accompanying Next’s recent inline full-year results from CEO Simon Wolfson. Referring to often being asked "how much less space will you need in the future?", Wolfson said the question was wrong as Next does “not have too much space, we have too much rent, rates and service charge”.

In our opinion, investors remain overly focused on the online threat. This threat has now been addressed in many cases where “self help” measures (management initiatives to enhance performance, such as Dunelm’s drive to sell additional goods online via in-store tablets), have significantly increased the proportion of e-commerce sales.

Despite today’s near-universal pessimism there are plenty of reasons to be optimistic about the outlook for the UK’s dynamic and innovative retailers.

The value of investments and the income from them may go down as well as up and investors may not get back the amounts originally invested. Investing in a concentrated geographical region may result in large changes in the value of any investment. If you are unsure as to the suitability of your investment please speak to a financial advisor.