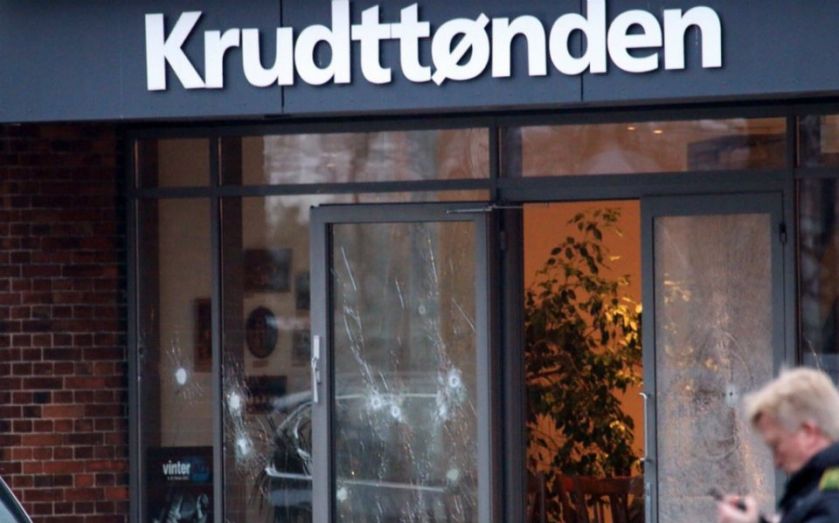 One man has been killed and several people injured including three police officers after a shooting at a free speech event at a Copenhagen cafe.

Dozens of shots were fired at the Krudttoenden cafe in the north of the Danish capital shortly before 3pm.

Danish police are hunting a lone gunman who fled in a dark VW Polo after initially believing there were two gunmen involved in the attack. They released a picture of the suspect apparently wearing a purple balaclava and black puffa jacket.

Authorities believe the shooting was politically motivated and Denmark's Prime Minister Helle Thorning-Schmidt has called the attack an act of terrorism.

The event was attended by cartoonist Lars Vilks who has faced threats for his depiction of the Prophet Muhammed dressed as a dog in 2007 which caused controversy.

French ambassador to Denmark Francois Zimeray who was also attending the event tweeted that he was unharmed.

Still alive in the room

French President Francois Hollande has condemned the attacks and said French interior minister Bernard Cazeneuve will head to Denmark as soon as possible to meet with the Danish Prime Minister.

The shooting comes just weeks after the attack on the offices of French satirical magazine Charlie Hebdo in which 12 were killed, including several cartoonists.

The mayor of Copenhagen Frank Jensen has said he is "dismayed and deeply concerned about the shooting attack at Krudttoenden. My thoughts are with those affected and their relatives."