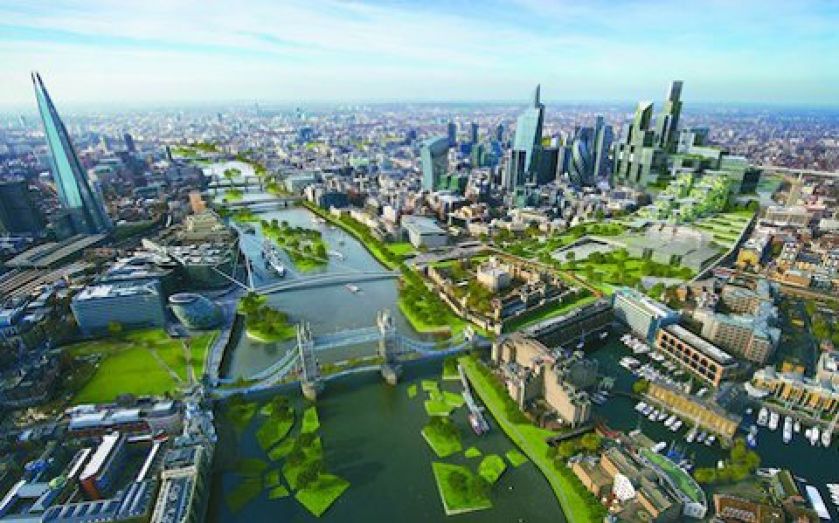 WHAT will the City look like in 2050? Since the Gherkin was completed just under 10 years ago, prompting a new wave of signature architecture, the City’s future skyline has been a subject of much debate.As part of The Developing City exhibition, New London Architecture has commissioned three groups of architects, developers and property professionals to come up with their visions for the City in 2050. On display at the Walbrook Building on Cannon Street, their concepts are as close as we can get to a crystal ball.The drivers for change are clear. The office demands of firms, congestion and climate change are some of the issues the City must grapple with. At a more human scale, the City must attract talent to maintain its position as a global finance centre. Demand for office space is also increasing. In the next 15 years alone, the City of London Corporation anticipates another 12m sq ft of office space will be needed.The first group – Woods Bagot, Brookfield and Hilson Moran – called for London to “Grow Up”. As space is limited, more buildings are needed to meet employment growth, in turn necessitating more space at ground level. By creating taller buildings, more new public space would enable wider streets, which can provide shops, cafes, leisure facilities, trees and parks.The second group – Gensler with Eric Parry Architects, the London School of Economics, the Royal College of Arts, Siemens and RWDI – proposed a major park from Hampstead to the City.And John Robertson Architects with British Land, Land Securities and Arup illustrated a de-carbonised City, with pedestrianised streets, green space and a new financial centre at Aldgate.What unites all three visions is the focus on space between buildings. The architecture of the future will be as much about green spaces and people as it will be about buildings.This is not surprising. With any hint of lunchtime sun, all grass across the City seems to be occupied. As long lunches have given way to desk-bound sandwiches, any opportunity for fresh air is grasped by City workers.To meet this demand for public space will mean making some choices about how we develop.The Woods Bagot, Brookfield and Hilson Moran view is that, due to continued growth in the knowledge economy, developers must build upwards to meet the on-going demand for office space, provide more public space both within and around buildings, and give workers ready access. This can only be achieved in the eastern cluster of the City.This makes sense – the eastern cluster is the City’s least green and most disjointed part. But to make it happen, we need to build a consensus around more towers in areas near where people live in the East End.This may be controversial. While more public space is always welcomed, many are hostile to tall buildings, particularly when they are close to homes. If we are to continue to build upwards, a new acceptance of high rise working will be required. It is a compromise we all need to discuss and agree.Looking towards 2050, we can be confident. Despite the many claims that one city or other is ready to take on London as a global centre, the City has remained resilient. It is our ability to build and re-build our City in new and imaginative ways that keeps it relevant.Alderman Sir Michael Bear is patron of The Developing City. Its exhibition continues at The Walbrook Building, Cannon Street, until 9 September. For more information visit www.thedevelopingcity.com