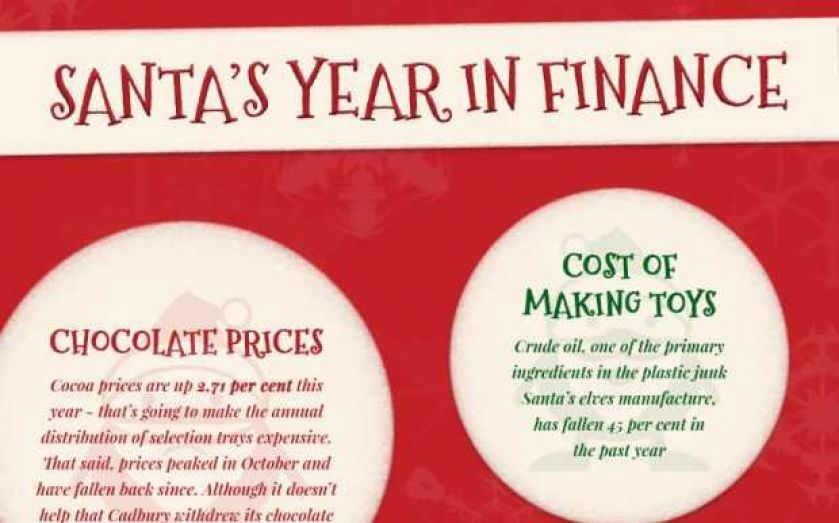 The economic downturn was a tough time for most of us – and just because he runs on fairy dust and sparkles, doesn't mean Santa Claus was left out. Elves striking over low pay (probably), the cost of hay going through the roof – you name it, Father Christmas was hit with it.

Thankfully, a quick look at his fortunes this year suggests we're not the only ones benefiting from the economic recovery: although the price of cocoa, the main ingredient in one of Santa's biggest expenditures, has gone up, the falling price of oil means the manufacturing cost of the plastic tat – er, sorry, toys – made by his elves has dropped.

There's also the small matter of all the naughty boys and girls: a survey by School Stickers published earlier this year showed the names of the best and worst-behaved children. Thankfully for Santa, the number of new "nice" children fell 9.6 per cent* this year, which suggests his expenditure will fall over the next few years.

So this year is going to be Santa's merriest Christmas in years. Ho, ho, ho indeed.

Viewing this on a mobile and can't read the text? Tap to open it in a new window, then pinch to zoom.

* To arrive at that figure, we took the top five well-behaved children's names of each gender and used ONS data to find out the increase in the number of babies given those names between 2012 and 2013, the most recent data available.