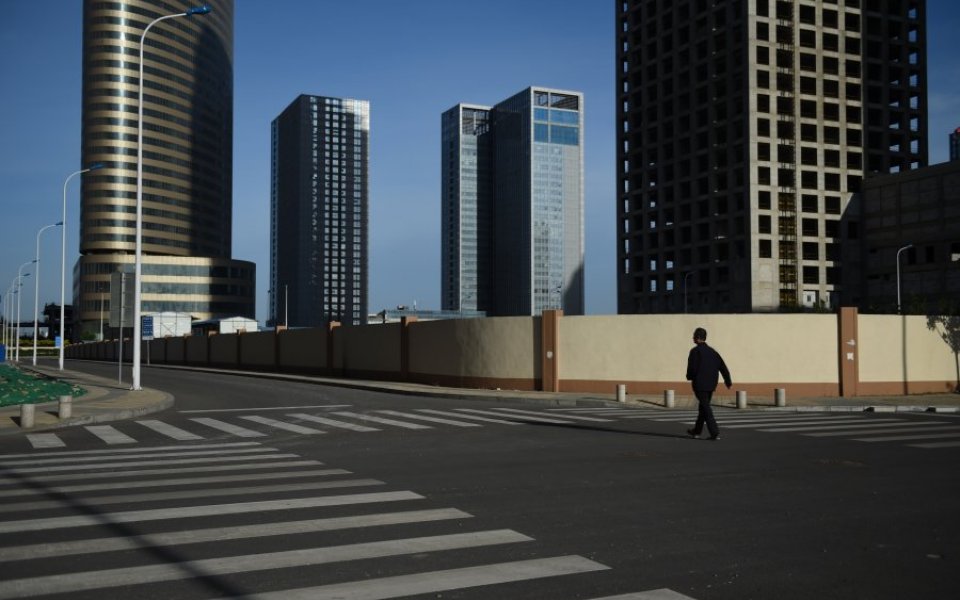 Ghost cities dotting the landscape are an eerie reminder of China’s failed ambitions.

Yujiapu cost billions. The buildings were modelled on Manhattan’s skyscrapers, as it was supposed to be a new centre of world finance. Sitting on the edge of the huge northern city of Tianjin, it’s mostly empty. There are scant signs of construction on half-finished buildings, although the government denies the project has run out of money.

There are countless such towns across China. Technically, the term “ghost city” isn’t appropriate. Ghost cities are places that were once thriving, but have been abandoned. China’s new towns have been pumped full of money, but are yet to spring to life.

The empty cities are emblematic of the main charge against China: that its impressive growth was based on debt accumulated to fund worthless projects. That its dangerously imbalanced economy is the biggest risk facing the global economy.

China watchers have scarcely been short of risks to fret about these last five years. In that period alone, China has been the site of a speculative property bubble and a burgeoning shadow banking crisis. Off-balance sheet loans have been created for investment, often in risky bonds. Many of these were collateralised with copper, so there were concerns a wave of defaults would mean forced sales of the red metal, leading to a crash in prices.

One of these, called the “Credit Equals Gold No.1” product, teetered on the edge of default but was bailed out by an anonymous bidder ­­– believed to be the People’s Bank of China.

Then came last year’s stock market boom and bust. “China is in the midst of a triple bubble, with the third-largest credit bubble of all time, the largest investment bubble and the second-largest real-estate bubble,” Credit Suisse analyst Andrew Garthwaite wrote in a note last summer.

It’s the lack of proper investment options in China which has spurred much of this. The population is grasping upwards but there are few well-established routes to wealth. There have also been speculative bubbles in fermented tea, garlic, preserved walnuts, and mahogany furniture in the last decade, as people search for places to store their wealth and make money.

The authorities are grappling with policy measures to contain the wayward economy. One tool is the yuan, the currency which only trades within a slim band set by the People’s Bank of China. Now, the biggest unknown hanging over the global economy is a potential devaluation, says Keith Wade, chief economist at Schroders. It's worrying because last time China materially devalued renminbi, it caused the Asian currency crisis.

Figures released this week show China’s foreign currency reserves dropped by $99.5bn in January. At $3.23 trillion, it still has the largest stash of foreign currency held on reserve in the world. But the amount fell by $420bn last year, and is at the lowest since 2012. “It is quite frankly unsustainable for the People’s Bank of China to continue defending the currency and spending their reserves at this speed,” says Jameel Ahmad, chief market analyst at FXTM.

The reserves have likely been sapped by the authorities selling dollars to support the yuan. The Bank does want to slowly weaken the currency (as it has strengthened considerably, and is making the country uncompetitive), but has been pressured by speculators betting the currency will fall and by capital flight. Some estimates suggest $800bn left the country last year. “Much of this may be investors grappling to reduce dollar-denominated debts that have been clocked up, as the pain of servicing of this has become exacerbated by a strong dollar,” says Jason Hollands, managing director of Tilney Bestinvest.

The question is what they will do next; continue propping up the yuan, devalue it, or something else. “It is likely that the authorities will have to re-introduce capital controls to maintain currency stability,” says Wade.

The wider economy will also need support. “China has a large dashboard of policy options it can press,” says Neil Williams, chief economist at Hermes Investment Management. Among these are further cuts to interest rates. “It is still running real interest rates as high as 4 per cent to consumers and as high as 12 per cent to companies,” he says.

Its huge size and ability to topple stock markets and economies around the world give China special status and belie the fact that it is still an emerging market. It’s lumbering on a long path, and it will be messy.

Maybe, like China, they just need another decade to come to life.