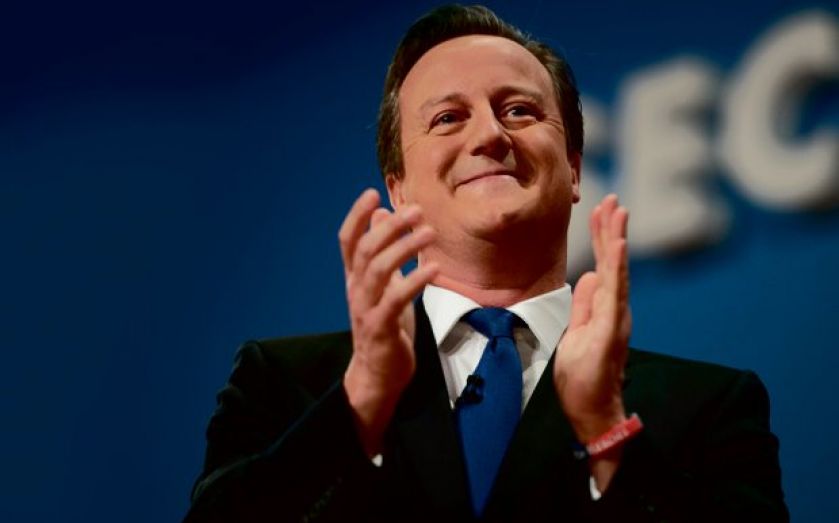 David Cameron has done an about-turn on the economy, Labour’s Ed Miliband said yesterday. The Prime Minister, Miliband continued, was getting his excuses in early about the state of the UK’s finances, having spent months shouting about the strength of Britain’s recovery.
About-turn or not, building on the “there is still more to do” message Cameron delivered in a speech at the Confederation of British Industry (CBI) last week appears to be a core message for the Conservatives ahead of the election, in a bid to convince voters not to vote Labour in May.
The Conservatives poll consistently well when it comes to handling the economy and this parliament is no different. Both George Osborne and Cameron have strong personal poll ratings and score highly in questions about their leadership skills and competency to govern, especially when compared with Labour.
But the Tories know that they do much worse on the issues that traditionally gain support following a period of austerity – namely rebuilding public services and boosting education and welfare systems.
Although the appetite for increasing spending on benefits and the like has waned in recent years, it’s not enough for the Conservatives to be comfortably in the lead on these issues. Cameron knows he must therefore tread a fine line between wanting people to feel like things are on the up, and wanting them to remain cautious about the future. In other words, the Prime Minister doesn’t want us to think we’re out of the woods yet and demand a splurge on the NHS and schools, both issues most associated with Labour.
There are a number of legitimate economic reasons for this. It’s not just about winning an election. But it’s unsurprising that Cameron warned that “red warning lights are once again flashing on the dashboard of the global economy”. It serves his purpose to wave the prospect of another period of economic instability in front of voters’ faces and using Europe, an issue many people already feel wary about to do it, is actually pretty clever. The result, the Prime Minister hopes, will be that people are more receptive to his long-term economic plan if they feel their financial stability is at risk without it. It’s the politics of fear at its finest.
The problem is, business leaders aren’t really buying it. Both the Institute of Directors (IoD) and the CBI agree that while things in the Eurozone are looking shaky, no political party in the UK can protect the country from the inevitable fallout. On issues such as Ebola and Ukraine, the IoD counters that these may prompt uncertainy in markets, but they have little quantifiable impact on the economy overall.
“Problems in the Eurozone will have a huge impact on the UK regardless. It doesn’t matter who is in charge,” James Sproule, chief economist at the IoD said yesterday. But party leaders were undoubtedly being cautious about the recovery, he added, noting that most business leaders had confidence that the UK is on the up again, with growth predicted next year. Rain Newton-Smith, the CBI’s director of economics, echoed concerns about the effect of Eurozone sluggishness on UK exports but also added the economy was expected to remain “on track”.
So is Cameron over-egging the pudding? Perhaps, yes. While the UK isn’t out of the woods yet, most signs point away from financial chaos. But reminding voters of the risks, particularly ahead of the Autumn Statement, isn’t a bad political move for Cameron to make.