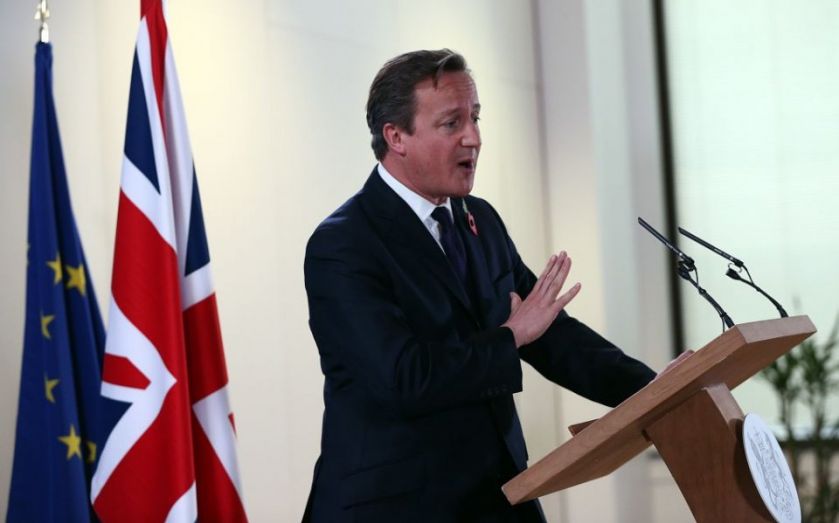 Prime Minister David Cameron is facing increased pressure to fast-track his plans to reform Britain’s relationship with the European Union.
Cameron is widely expected to introduce legislation for an in-out referendum during the early days of the new parliament, as well as ramp up discussions about reform within the EU ahead of the next meeting of the European heads of government in Brussels on 26 June.
It is understood that the Prime Minister will rely on chancellor of the exchequer George Osborne — who was given the additional title of first secretary of state over the weekend — to steer many of the renegotiation debates with other EU member states.
Foreign secretary Philip Hammond, home secretary Theresa May and a to-be-confirmed European minister are all also expected to prove key players in the debates, according to Open Europe policy analyst Pawel Swidlicki.
Swidlicki told City A.M. he expects Cameron’s reform efforts to involve multiple policy-specific proposals, relying on various alliances of European countries, rather than one “monolithic” proposal.
“The more Cameron can make it about EU itself and not just UK-specific issues, the bigger the chance he has of success,” Swidlicki added.
Meanwhile, domestic campaigners said over the weekend that they would use the coming weeks to double down on their efforts.
Chief executive of the eurosceptic group Business for Britain Matthew Elliott told City A.M. his campaign would enter its “second phase” of pushing for specific changes in the UK-EU relationship, while Lucy Thomas, a campaign director for the pro-EU Business for New Europe group said her organisation would push for streamlining EU institutions while making the case for EU membership ahead of an expected referendum before the end of 2017.

WHAT’S ON THE TABLE AT THE EU

IMMIGRATION REFORM
Cameron is not expected to seek a cap on EU migration. Instead, the Conservative manifesto said “changes to welfare to cut EU migration will be an absolute requirement”, with EU migrants required to live in the UK for at least four years before  claiming tax credits and child benefit.
FREE TRADE AGREEMENTS
In their manifesto, the Tories said they backed the Single Market and wanted to “turbo-charge” free trade, referencing the EU/US TTIP negotiations which they said “could be worth billions of pounds to the UK economy”. Expect Cameron to call for further expansion of the Single Market.
EU BUDGET
Cameron and the Conservatives have been clear that they want to reduce the size of the EU budget. In the party’s manifesto it said it will “press for lower EU spending” and “further reform of the Common Agricultural Policy (CAP)”, which experts say may prove easier said than done.
NON-EUROZONE RIGHTS
The Conservatives say they are committed to keeping the pound and staying out of the Eurozone, but in their manifesto they add that they want to guard against Eurozone-related shocks: “We will not let the integration of the Eurozone jeopardise the integrity of the Single Market.”
AN EVER-CLOSER UNION?
In perhaps their most ambitious yet ill-defined proposal, the Tories want to “see powers flowing away from Brussels, not to it…We want national parliaments to work together to block unwarranted European legislation. And we want an end to our commitment to an ‘ever closer union’”.