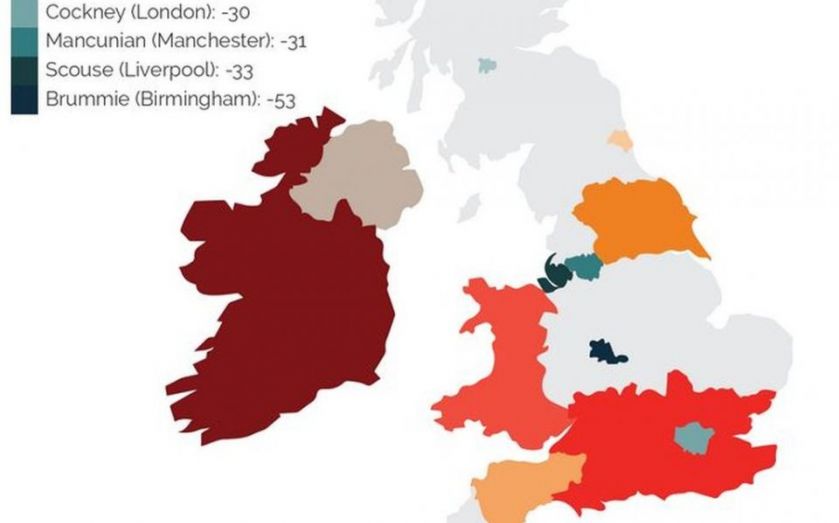 Do you ever feel that people are wincing the minute you open your mouth – and that it might not be what you're saying, but how you're saying it? According to a new poll by YouGov, it could well be your accent that they are reacting to.
Brummie accents have come out worst with 67 per cent of people saying they find it unattractive, compared with just 14 per cent of people who liked it, giving the accent a net score of -53.

Scouse accents come out with the second lowest net score (-33) followed closely by Mancunian, Cockney and Glaswegian, all of which had negative ratings.
Irish accents (from the Republic as opposed to Northern) registered as the most attractive, followed by Received Pronunciation and Welsh.
Here's how that looks in two charts. The first shows both scores for attractive and unattractive, while the second shows the net total:
Within the data there are some variations – people tend to rate local accents more favourably, for example – while people in the 40-59 age bracket tended to be harsher on Cockney accents, as well as those from Manchester and Liverpool, than the average.
ABC1s – those in the upper and middle classes – really did not like the Brummie accent, with 71 per cent saying it was unattractive. Their rating for Scouse, Mancunian and Cockney accents were also worse than average.
So if your boss is aged 40-59 and upper or middle class, you might want to try out the clipped consonants and elongated vowels of BBC English. For extra brownie points you could try out your best Irish, but you might want to practise it before unleashing it on the office.