Best of travel: The town made famous by Bruce Springsteen 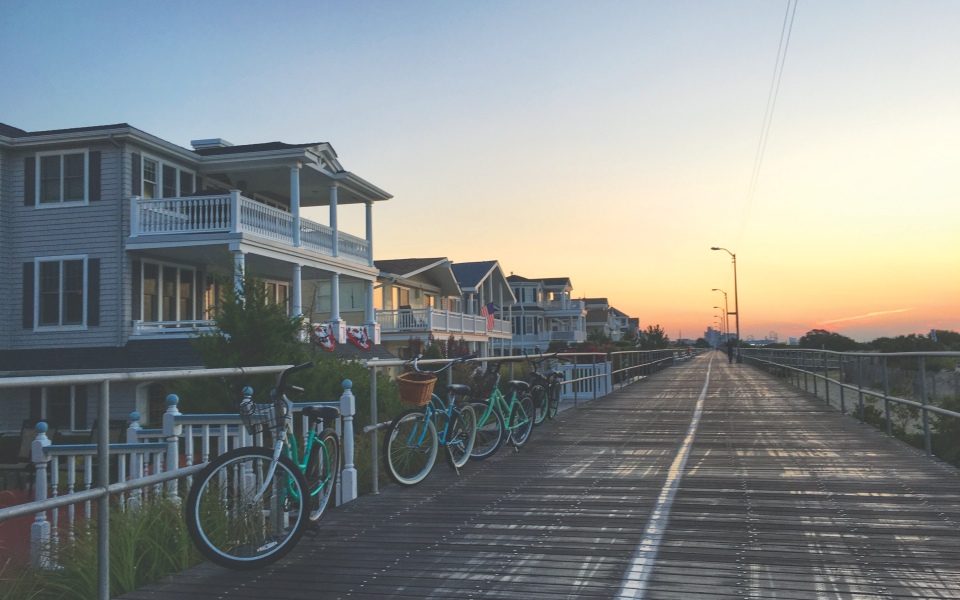 To tide us over until we’re able to travel again, we’re republishing classic travel stories from our archives. This week we revisit Laura Millar’s trip to the downbeat seaside town in New Jersey made famous by Bruce Springsteen.

On the boardwalk of the small seaside town of Asbury Park is a fortune-telling booth, which has been owned by the same family of psychics since 1932. When I visit at ten in the morning, it’s shut, with a phone number pinned to the window instead.

Surely they should have known I was coming. This ocean-blue booth, named ‘Madame Marie’, with the legend ‘Temple of Knowledge’ underneath, is one of the best-known sites in Asbury, and one of dozens connected to arguably New Jersey’s best-known son: the Boss, Bruce Springsteen himself. It was here, as a teenager who used to play his guitar along this very boardwalk, that Madame Marie prophesied his music would make him famous.

Sadly, Madame Marie died in 2008, aged 93, after reading the palms of a host of stars including Ray Charles, Elton John and the Rolling Stones, who all played here. They were already big names when she met them; Springsteen was a kid from the nearby town of Freehold who could hold a guitar.

Since Marie’s death, her business has been taken over by her grand-daughters; I had been hoping one of them could tell me more about Bruce.

Asbury Park was immortalized in Springsteen’s 1973 album of the same name. At the time, this once-fashionable seaside resort had recently plunged into steep decline…

Thankfully, the boardwalk on a windswept, sunny day in May is a pleasant place to be, lined with a series of boutiques, cafés and bars, with a hard-to-beat view across the Atlantic. At one end is the elaborate, Beaux Arts-style Paramount Theatre, its nautical-themed décor swimming with dolphins, mermaids and ships. Outside, the Sunset Avenue Music Pavilion is being restored; for now, it’s covered in colourful hand-painted murals, part of the Wooden Walls project, which aims to beautify local buildings. Strolling to the other end, I check out the Silverball Museum Arcade, full of old-school arcade games and pinball machines, and pass the Asbury Eighteen mini-golf course; the whole area’s an enticing mix of contemporary cool and retro kitsch.

A handful of people are out walking dogs or stopping to chat; it’s pre-season, which means the locals haven’t been invaded yet. And they will be; last year, AP was voted ‘America’s Coolest Small Town’, and recent heavy investment and development are bringing this little gem – with a population of only 16,000 – back to life. Exploring beyond the boardwalk, I find a series of wide streets lined with a mix of smart residential blocks, and grungy housing projects. ‘Downtown’ radiates from Cookman Avenue, with rather more hip bars and businesses, though edgier Main Street looks like it’s seen better days.

Read more: From sunken sculptures to rusting Soviet planes, Grenada is an island brimming with mystery

Asbury Park was immortalized in Springsteen’s 1973 album of the same name. At the time, this once-fashionable seaside resort – known as the ‘Jewel of the Jersey Shore’, which brought New Yorkers an hour down the coast to escape the heat of the metropolis – had recently plunged into steep decline. Race riots had resulted in the destruction of much of the town’s West Side, home to immigrants and the black community; families and businesses decamped to nearby towns with better schools and glossy malls. As a result, Asbury Park became a ghost town.

“But the music never stopped,” insists brisk, pony-tailed fifty-something Eileen Chapman, who I meet in the lobby of my hotel, The Asbury, a massive, glass, steel and brick example of the town’s present-day revival of fortune. As well as sitting on Asbury Park’s council, Chapman’s one of the curators of The Bruce Springsteen Archives and Center for American Music at nearby Monmouth University, a vast collection of Springsteen memorabilia, which includes items donated by his own mother, Adele, from school reports to yearbooks and letters.

“All through the 80s and 90s, anyone who came to Asbury only came for the music,” Chapman expands. “There was nothing else here.” But then, as she explains, music was always at the heart of Asbury Park. “There were so many places for bands to play, even in the 20s and 30s; the Convention Hall on Ocean Avenue, which has Greetings from Asbury Park on the front spelled out in lightbulbs, hotel lounges; Ella Fitzgerald and Count Basie used to play in clubs on the West Side…this was the place to be if you were into music. It still is.”

Music sweats out of every pore in Asbury. Chapman steers me back towards the waterfront; here, as well as the newly revitalised boardwalk itself, are clustered a handful of venues any self-respecting Springsteen fan would give their guitar-strumming arm to visit. We stop at the peppermint-green Wonder Bar, with its red and white striped awnings and mural of a grinning, wide-mouthed face – a tribute to Tillie, an iconic character painted on the side of the now-defunct Palace Amusements (where Springsteen shot the Tunnel of Love video).

To this day, Springsteen still hangs out at the Wonder Bar – “he’ll park his motorbike in the back, stroll into the bar, then head straight outside and play with my dogs!”

Inside, as you’d expect at two in the afternoon, the place is dimly lit, with stools stacked on tables, and a bearded hipster lugging crates of beer to the fridge behind the bar. Chapman calls out, “Lance!” and a shambling but beaming figure in a cowboy hat emerges from the gloom. Musician Lance Larson has run the place since 2002, but the Wonder Bar was a fixture on the live music scene long before that. The night legendary saxophonist Clarence Clemons first met Springsteen, which led to the formation of the E Street Band, Clemons was playing here. Larson’s known Springsteen since he was thirteen; “we played teen clubs together,” he explains. “I saw the talent in him straight away.” To this day, Springsteen still hangs out at the Wonder Bar – “he’ll park his motorbike in the back, stroll into the bar, then head straight outside and play with my dogs!” – and it’s Larson’s red baseball cap that’s hanging out of Springsteen’s right-hand jeans pocket on the cover of Born in the USA.

Round the corner is the Stone Pony, which Chapman used to manage, and where Springsteen cut his performing teeth; today, upcoming gigs include Dweezil Zappa, Modest Mouse and The Breeders. Other venues Springsteen sprinkled with his particular brand of stardust on his way to playing thousand-seater stadia include The Student Prince (now a Neapolitan pizza joint called Porta), and the now-shut Upstage (the after-hours West Side club where Springsteen was playing the night Clemons met him).

Just behind the Stone Pony is the newly redeveloped Asbury Lanes, a vintage-style bowling alley with a stage for live music that Springsteen himself helped reopen in June. The Asbury Hotel, formerly the town’s abandoned Salvation Army retirement home, is two minutes’ walk away – the first new hotel to open in the town for fifty years. Just beyond it, the cacophony of cranes and drills signals the continuing work on a multi-million dollar project called 1101 Ocean, a mixture of luxury condos and retail space due to open in the summer of 2019.

“I don’t want the place to become too gentrified,” says Chapman, when we meet up again for a drink at the Festenhalle and Biergarten, a big beerhall just off Cookman. “We’re still a bit quirky and weird, we have an edge; you can walk down the street and see a transvestite, or a clown pushing a shopping cart, or an old couple, or teenagers – we’re unique but we’re representative of everyone.”

Disappointingly, I take my leave of Asbury without actually having seen a clown pushing a shopping cart, but before I do, my phone rings. It’s Dainzie Costello, one of Psychic Marie’s grand-daughters. She confirms what Marie said to Springsteen; “Yeah, he came in for a reading – I don’t even think he paid her! – and she told him to stick with his music as he’d be the Boss of New Jersey, heck, the Boss of the World!” Has Dainzie ever met him? “Sure,” she says.

“He’s been to see me a few times, he’s a real sweetheart. Last time was about five years ago. I knew that Asbury Park was going to become great again, so I told him that, and he said that made him so happy.” Come and see it for yourself, before everyone else does.