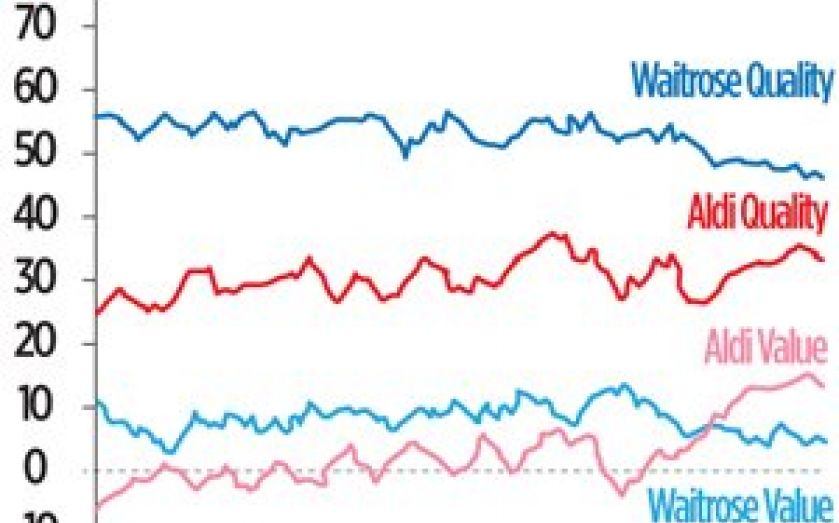 ALDI has been on the rise this week. The discount grocer said its pre-tax profits had more than doubled in 2012, and during the year it attracted 1m additional shoppers. The company also revealed that it is launching a new own-brand line of cut-price luxury foods in time for the Christmas season.

Aldi has a reputation for being a no-frills supermarket, but with items like Serrano ham and a three-bird roast with pork and orange stuffing, it would appear it is now making a bid for more affluent consumers.

Waitrose, whose shops are more traditionally linked to these upmarket goods, still leads in market share, with 4.8 per cent compared to 3.7 per cent for Aldi. But the cheaper rival is catching up in the minds of consumers.

Looking at the two brands’ overall Index scores, which looks at six measures of brand health, Waitrose is out in front at 30.6 compared to 19.1 for Aldi. However, since the beginning of the year Waitrose’s Index score has fallen five points, while Aldi is up by three.

Waitrose still dominates when shoppers think of quality, with a score of 46.4 compared to 13.5 for Aldi. But perception of Aldi’s quality has been rapidly improving, up from 6.4 at the beginning of the year, and from a lowly minus six at this time in 2011. On value, the situation is reversed.

When we filter for high income respondents we see that they regard Waitrose even more highly than the general population, at 37.9 compared to 30.6, while Aldi’s Index score goes down slightly from 19.1 to 16.8.

However, Aldi’s rising reputation for quality combined with its new line of food items could go a long way to luring price-conscious shoppers with upmarket tastes, especially in the all-important Christmas shopping wars.