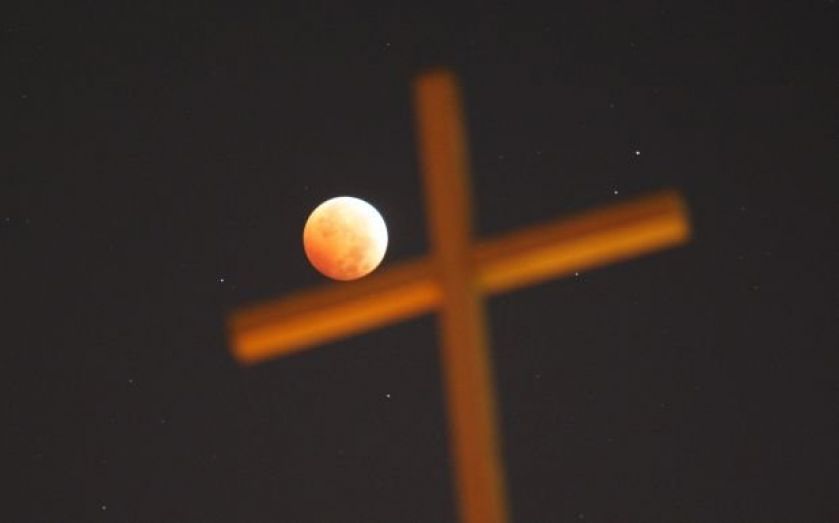 Yesterday, the moon turned a reddish-orange colour as the Earth passed in front of it and blocked rays of sunlight from giving it its usual silver glow.

While this “blood moon” phenomenon was not visible from the UK or anywhere else in Europe, it brightened up American, Asian and Australian skies for a few hours.
A blood moon doesn't happen every day – not only does the moon have to be full, but the Earth, sun and moon have to be in perfect alignment, with the Earth in the middle.
When the moon passes directly behind the Earth it moves into its shadow, or “umbra”, preventing any rays of sunlight from reaching the moon and reflecting off it towards Earth. This is called a total lunar eclipse and is different from a partial lunar eclipse, which involves the moon passing through the edge of the Earth's shadow rather than right into the dense centre of it.
A total lunar eclipse lasts until the moon has finished orbiting through the Earth's shadow, which takes a few hours because the Earth is bigger than the moon. Solar eclipses – where the moon passes between the Earth and the sun and momentarily blocks our view of the sun – last for just a few minutes for this very same reason.
But in the case of a solar eclipse, we just see blackness. Why, then, can we see the moon at all if we are blocking any rays of sun from reaching it? This is because of the “Rayleigh effect” – where light is scattered through the Earth's own atmosphere and certain parts of the colour spectrum are removed. When this light is reflected off the moon and back to the Earth, it appears red. It is this same effect that causes sunsets to appear red.
While a blood moon is a rare occasion, it is not the first to have happened this year. Last night's total lunar eclipse was the second part of a lunar tetrad – a series of four blood moons over a one and a half year period. The first occurred in April, while the latter two are due to occur in April and October next year.
Religious significance
Most of us enjoy the sight of a blood moon, but for some it is sign that we should start preparing for our ultimate demise.
The “Blood Moon Prophecy” believed by some Christians states that a lunar tetrad indicates the end of time is approaching.
In the Book of Joel, which is part of the Hebrew Bible, it is written that "the sun will turn into darkness, and the moon into blood, before the great and terrible day of the Lord comes."