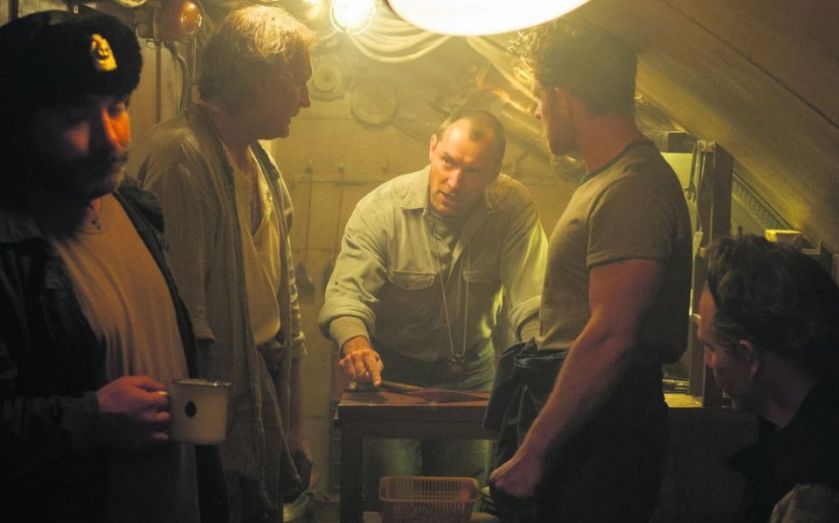 Maybe three miles under the sea, locked in a rusty tube with a dozen sweaty blokes, is the only place Jude Law can be trusted not to get anyone pregnant. That’s the only reason I can think of for why he agreed to this sub-Guy Richie, substandard, submarine borefest.
It’s hard to tell what the scriptwriter has more disdain for, his audience’s intelligence, or the laws of physics. Toy Story is more plausible than this, a film in which gold floats like polystyrene and Jude Law speaks like Ally McCoist. Law has come in for a lot of flak for his accent (he plays Robinson, an out of work deep sea salvage expert from Aberdeen), which is a little unfair because it isn’t exactly bad, just absurdly overcooked (imagine Rabbie Burns in charge of a submarine).
Burns probably would have done a better job of captaining the sub than Robinson, who is so intent on getting his hands on some Nazi gold buried on the ocean floor that he’s literally willing to drown himself and ten of his mates to get to it. Greed, you see, is bad and makes you do bad things (and, it would seem, films).
Not even strong support from the likes of the Ben Mendelsohn and Scoot McNairy can salvage this from the depths of implausibility. Some questions that occurred to me while watching Black Sea: why isn't the gold sinking? Why did he invite that homeless guy on the submarine mission? Why did that man spontaneously stab the other man?
This is the main problem with Black Sea. Without any overriding war or conflict, all tension must be derived from conflict between the crew-members, but there’s no reason to believe they wouldn’t just cooperate. One minute they’re all working together nicely on the sub, the next they’re smashing each other’s heads with spanners. It just doesn’t make sense.