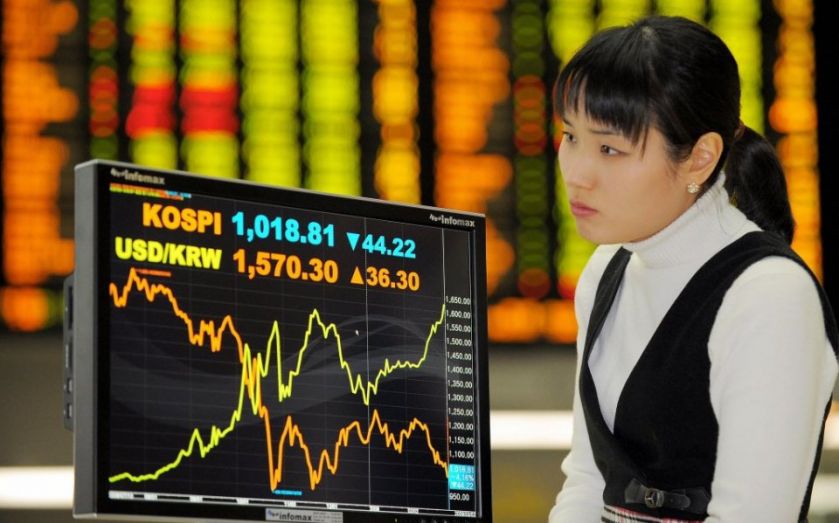 Market turmoil is widespread today, with gains being wiped off indices in Asia, European markets opening lower, and the FTSE 100 edging towards 6,000.

What do analysts make of the developments? Here's a round-up:

1. "The news propped up a malaise in markets" – Bernard Yaros, Moody’s Analytics

The release of the weakest Chinese manufacturing data since the financial crisis raised concerns that demand in the Dragon Economy could be on a downward trajectory. The news propped up malaise in markets, exacerbating losses in previous trading days from markets in Asia to the U.S. and taking the CBOE Volatility Index on a 50 per cent hike this week

If the market puts in a day’s work next week, it is possible that equity markets will experience a "dead-cat-bounce", but conditions will remain very volatile up until Christmas.  At 9.20am the FTSE 100 was down 152 points at 6044.

Mining stocks down an average of five per cent and oils by two per cent inflicted the most damage. There was little blue in evidence. Business was brisk today as portfolios were lightened up – but not massive as volumes were on the Street of Dreams on Friday. The DAX and the CAC were down 2.5 per cent and the DOW was due to open up down 400 points.

Maybe it's just 'cos it's a Monday and yet again, we're replaying Friday's move rather than looking forward.  But I doubt it….

Markets are afraid of further economic weakness in China, further pain in global commodity markets and uncertain about Fed and People's Bank of China policy – what they will do and what the impact will be. The divergence between global commodity prices and equities is not a new theme but the danger now is that they begin to re-correlate – as they did when the dotcom bubble burst in 2000 and what had previously been an emerging market crisis became a US recession.

Equity markets very much in the red this morning after selling off hard on Friday and over the weekend. Three main drivers being China, Greece and the US Fed.

Lack of reactionary government intervention in Chinese stock markets has sent the relatively unsophisticated retail investors that make up the majority of the market packing.That in turn has created a perceived dearth of demand for commodities as outside investors use stock market volatility (rightly or wrongly) to construct a bearish view of China's economy. This in turn spurring widespread concerns about growth in Asia-Pacific AND the rest of the world.

5. "You can only fight against market forces for so long"  – Alastair McCaig, IG

Regardless of what the Chinese government and People's Bank of China might be saying and doing, they are currently learning a lesson that many have learned before them, namely you can only fight against market forces for so long before you end up losing.

Pre-market expectations had the majority of equity indices being called over three per cent lower as Asian markets spooked European investors who saw today’s moves on the Shanghai Composite wipe out all of its 2015 gains. August is always renowned for thin volumes and these current frothy markets will do little to entice the bulls to dip their toes into the markets.

Risk aversion is back in the financial markets. A combination of threats of tightening monetary policy in the US and UK with China slowing has created nervousness and this nervousness is now spreading to panic.

The chances of a rate hike now in September in the US has reduced from a probability of over 50 per cent to a possibility of less than five per cent.The interesting dynamic here though is in previous forays of panic, the US dollar has strengthened; however as the US dollar is over-valued, it is the euro that is the currency in demand.

This is feeding through to GBP/EUR and last week we were dealing up at 1.4200 and this week we are dealing at 1.3650. We can expect more of this to come as well, as the market re-adjusts to the risk event that we don’t see any rate hikes in the US this year, as warnings yet again prove to be powerful enough to turn the market.

7. "There is a readiness to flood the market with liquidity" – Rabobank analysts

The plunge in the Shanghai Composite, which was down nine per cent earlier this morning, has now almost wiped out all the year’s gains. Chinese officials and advisors to the People’s Bank of China have reportedly indicated a readiness to flood the market with liquidity but as yet there has been no decrease in reserve requirements from the central bank.