On 19 October 1987 global stock markets came crashing down amid worries about a slowing global economy and high stock valuations. The concerns were compounded by a computer glitch.

In the space of 24 hours stock markets in Asia, Europe and the US suffered falls of up to 23%.

It was the biggest crash in living memory. In the US, the Dow Jones fell 22.6%, destroying the previous record one-day fall of 12.8% set during the Wall Street Crash of 28 October, 1929.

However, with the help of central bankers stock markets recovered. Five years after the event stock markets in the UK, Europe and the US were rising by as much as 15% a year.

The chart below illustrates the performance of stocks before, during and after Black Monday.

Below we relive what happened and the lessons it can offer to investors today.

In October 1987 stock markets were in the midst of a five-year bull-run. The global economy had recovered from the recession and stagnation that had blighted the 1970s. Credit was expanding, house prices were rising and investors were in bullish mood. But things were about to turn sour.

A great storm was on its way to cripple the UK. Appropriately enough, Michael Jackson’s Bad was on the verge of topping the US billboards charts. At the cinema Fatal Attraction was a box office smash just as investors’ love affair with the stock market, albeit briefly, was about to end.

In the space of 24 hours on 19 October, global stock markets went into freefall. Yet few could put their finger on the exact reasons why.

In the years since, investors have blamed worries surrounding a turn in the fortunes of the global economy and rising inflation. Others have pointed to rumours of an interest rise in the US and political tensions between the US and Iran that were threatening to spill over.

There has been much conjecture.

What can’t be argued with is the fact that there was a collective panic across markets.

Losses were exacerbated by new computerised trading floors that were ill equipped, at the time, to prevent the collapse from spreading.

It came after a period of sustained gains. Most stock markets in developed countries had been growing at more than 30% a year in the five years up to Black Monday – gains that have not been repeated since. It took valuations to record highs.

As stock markets plunged and investors panicked, central bankers took action: interest rates were cut and the Federal Reserve “encouraged” banks to continue lending to ensure the flow of money wouldn’t dry up.

Those policies worked. In the five years following the crash, stock markets made a strong recovery.

US stock prices grew by 14.7% a year. UK and European stock markets rose at rates of 8% and 7.6%, respectively, while global stock markets as a whole posted annual gains of 6.3%. The Japanese stock market was the notable exception – a banking crisis left investors facing annual average falls of 7.2%.

What can we learn from it now?

While high stock valuations can contribute to a fall they are not necessarily the catalyst. As the table below illustrates, valuations in the US, UK and Europe are higher now than they were in 1987, yet stock markets continue to hit record highs.

In 1987 there was a more obvious path for investors to take to protect their money. In government bonds they could still find a healthy return as well as the required protection for their investment.

The yields on 10-year government bond yields in developed countries such as Japan, Germany and the US were as much as 9.9%.

The path to protecting your money now is not so obvious.

Views from the veteran fund managers

Matthew Dobbs, an equities fund manager who was in London at the time of Black Monday and is today Schroders' Head of Global Small Cap, said: “It is easy to understand why investors might be concerned about investing in stocks now. Stock markets continue to reach new highs and equity valuations are similar now to what they were in 1987. But there is big difference today: the risk-free rate is very different.

“What I mean is that that the yields on bonds and interest rates in banks, where there are fewer risks to losing your investment, are now very low compared to the dividend yield on the stock market, which is around 4%.

“Despite that I still don’t think too much money is going into stock markets. People are cautious towards stocks because of what happened during the global financial crisis of 2007 and 2008. Although it was 10 years ago it still feels like it happened quite recently.”

“The storm happened on the Thursday night before Black Monday. There was hardly anyone in the Schroders’ London office on the Friday or anywhere in the City.

“Matthew and I were in work because our tube line was running. Anyone coming in on overland trains had no hope. Fallen trees were strewn across roads and rail lines.

“With markets closed it meant that investors had to carry their positions throughout the weekend because they couldn’t square them on the Friday. But traders had bought portfolio insurance – a mechanism that automatically sold investments into a market when the price hit a certain level.

“Investors thought it was a free lunch and losses would be limited. But everyone was a seller and no one was a buyer when markets went into freefall on Monday morning. The automated mechanism of selling at a certain price failed. In fact, it exacerbated the issue.

“Ironically, if they hadn’t taken out this sort of insurance then markets might never have fallen as much as they did.

“At the time you felt it was the end of the world, but looking back it was just a blip. The UK and the US stock markets rebounded strongly in the late 80s and throughout the 90s.

“Could it happen again? Procedures are now in place to prevent stock markets falling so far, so fast. There will always market peaks and troughs but over the long term, stocks have delivered superior returns.”

The market blip that was Black Monday

The chart below reflects the fluctuations in the US stock market since 1970. It illustrates how Black Monday registered as barely a blip in the long term and how resilient stocks have been over the last 47 years.

Those who invested after Black Monday would have seen $100 turned into $1,135 without considering the dividend income paid out. That high return was achieved despite remaining invested through the dotcom crash of 2000-03 and the global financial crisis of 2007-09. 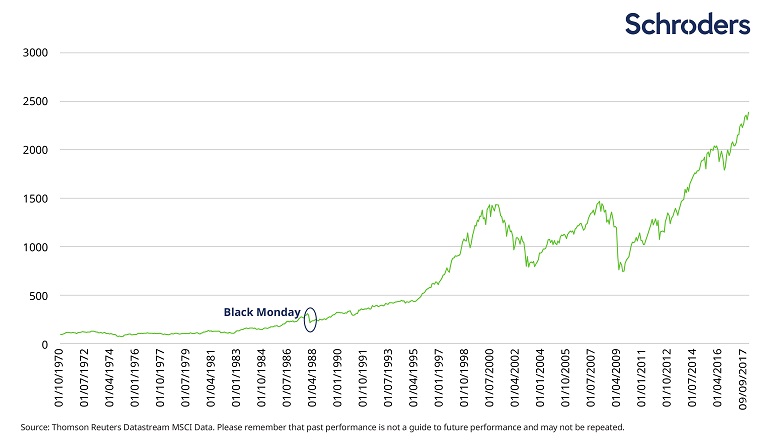