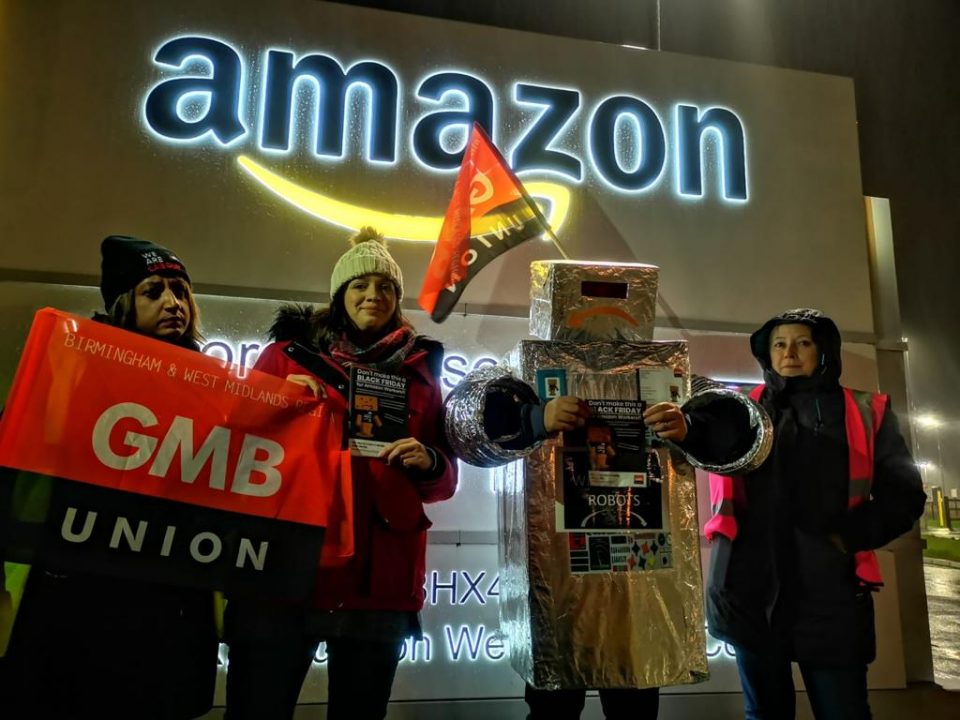 Staff at Amazon warehouses are staging walkouts on Black Friday and Cyber Monday in a row over the “appalling” treatment of workers.

The demonstrations are taking place today and on Monday at Amazon’s head office in Shoreditch, as well as seven other locations across the UK, the GMB union said, and involve “100, if not hundreds” of workers.

But Amazon questioned the number, saying walkouts were only taking place at four sites including Peterborough, Sheffield and Rugeley and overall involved just 30 “external pro-union people”.

A spokesperson added: “They’re making false claims to try and drum up membership subscriptions and failing to do that.”

The GMB said Amazon workers were breaking bones, being knocked unconscious and taken away in ambulances due to unsafe conditions.

“The conditions our members work under at various Amazon sites across the UK are appalling,” said GMB national officer Mick Rix.

“Amazon has spent a fortune on fluffy adverts saying what a great place it is to work. Why not spend the money making their warehouses less dangerous places to work?”

Read more: Most Black Friday deals are cheaper at other times of year

The union said its own investigations have revealed that more than 600 ambulances have been called out to Amazon warehouses over a three-year period.

More than 600 serious incidents were also reported to the Health and Safety Executive for injuries including fractures, head injuries, contusions and collisions with heavy equipment.

“It’s about time Mr Bezos showed empathy with the very people that have helped build his vast empire and make sure it is not a Black Friday for Amazon workers.”

French protesters targeted Amazon centres too, as climate activists blockaded lorries’ path into a depot in the south of Paris.

Others marched on Amazon’s French headquarters in Clichy with slogans like “Amazon: for the climate, for employment, stop expanding, stop overproduction”.

Amazon said the “vast majority” of Germany staff had turned up to work.

“Today our well-paid, dedicated and highly respected teams across Europe are doing what they do every day – delivering for their customers in an environment that’s fun, engaging and set up to help them succeed,” an Amazon spokesperson said.

“Self-interested critics have a vested interest in spreading misinformation about Amazon, but the facts tell a different story.The truth is that Amazon already offers industry-leading pay, comprehensive benefits, as well as a safe, modern working environment.

“These groups are conjuring misinformation to work in their favour, when in fact we already offer the things they claim to be fighting for. You don’t have to take our word for it – or theirs. Come and see for yourself by registering for a tour at one of our fulfilment centres.”