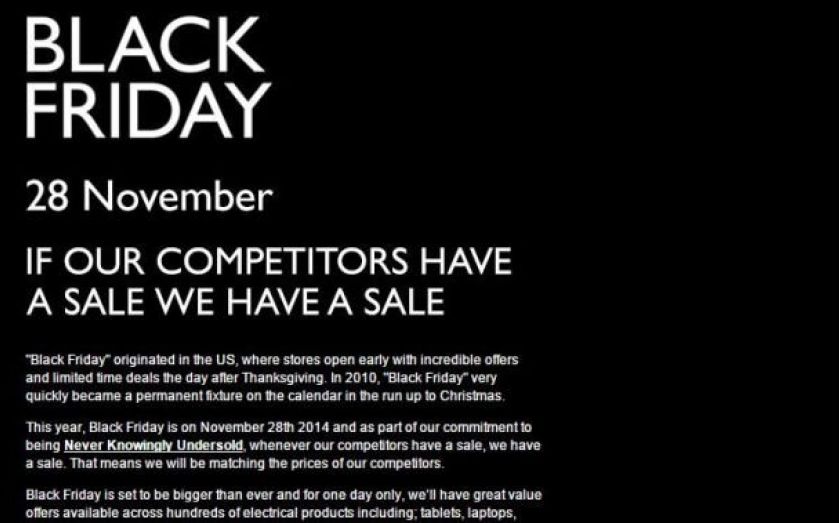 Retailers are gearing up for Black Friday to be one of – if not the – biggest online shopping day of the year, with hundreds of promotions being planned to tempt consumers to join the spending bonanza.
According to the Centre for Retail Research, shoppers will spend £1.32bn over the four days between Black Friday and Cyber Monday – an increase of 9 per cent on 2013 – but with all the cut prices it is estimated that total savings will reach £233m.
But who is offering the best deals? We round up some of the retailers you should be checking out here
Unsurprisingly given that the day is a US import, Amazon has led the pack and is offering deals all week through to Cyber Monday, which was until recently the UK's biggest online sales day. The etailer has got discounts of up to 70 per cent on items as varied as perfume, watches, tablets and cameras. It is also launching certain deals throughout the weekend, which will really ramp up excitement as you can't just buy key items as and when you want. Ones we spotted today included a Pentax K-50 DSLR Camera for £469.99 instead of £639.99 and a Fujifilm FinePix S1 Digital Camera for £229.99 instead of £399.99.

Fashion etailer Asos is getting in on the action – but keeping quiet about exactly what it has planned.

Halfords is also keeping its powder dry right now, though has high expectations, estimating there will 250,000 visitors on the day, with 7,000 orders placed. It has helpfully provided us with a list of the top deals, which includes the Voodoo Horde BMX, which will be on offer for £108 – a saving of £211; a Motorbike MXR750, which will be available for £80 instead of the usual £199.99; and an Apollo Cheery Lane Bike, which will be priced at £63 instead of £179.99.

Black Friday is particularly strong for those who love gadgets. Apple is also expected to unveil a number of deals. The giant clearly has plans – it has a “Black Friday Holiday Homepage – Apple Store (UK) – appearing on Google, but we will be kept on tenterhooks for a few more days as when you click through you get a “page not found” alert.

Rather more British is Marks & Spencer, which is supposedly expecting a big weekend, but when we searched for Black Friday on its website this is what we found. Hopefully the digital glitches it experienced earlier in the year won't hold it back over this shopping bonanza.

John Lewis is taking a completely different approach, explaining to its customers what all the fuss is about adding that “for one day only, we'll have great value offers across hundreds of electrical products including tablets, laptops, televisions, small and large electrical appliances”. Although most of its special offers have yet to take hold, because it price matches the department store chain has already introduced discounts on a number of lines.

Currys PC World also sees the value of building a brand around the day. It has a countdown to the day – which like John Lewis will open earlier than usual, at 8am – and an explainer for those not in the know. Limited detail around offers, though electricals will be a key area for price promotion.

Shop Direct Group – which owns fascias including Littlewoods, Isme and Very – is investing almost £1m into its Black Friday sales drive, with its younger fascia Very selling three orders per second during its busiest hour last year. It hasn't unveiled what is on offer just yet – you have to sign up first – but it promises “most wanted gifts and fashion for loads less… giving you more money for Christmas partying”.