THE WORST of the payments protection insurance (PPI) crisis appears to be over for Britain’s banks as the City watchdog yesterday published numbers showing a fall in complaints.

A total of 2.9m complaints were made in the first six months of 2013, according to the Financial Conduct Authority (FCA), down 500,000 on the previous six-month period.

The drop is the first fall since the first half of 2010. 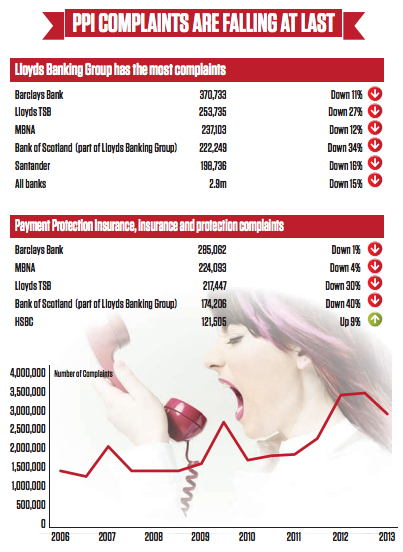 Banks paid out a total of £2.55bn in redress to consumers in the six-month period, £2.4bn of which was PPI compensation.

By brand, Barclays was top of the list for complaints, with 370,733 in the period, down 11 per cent on the previous six months.

But by banking group, Lloyds had more complaints – its Lloyds TSB arm had 253,735 complaints and its Bank of Scotland unit had 222,249.

“We have continued to make significant improvements to our customer service and this is highlighted by the fact that, as a group, we now receive fewer banking complaints per thousand accounts than any other major bank,” said Lloyds’ Martin Dodd.

Barclays said it too is cutting complaint volumes

“Whilst the number of complaints we receive is reducing sustainably as we work hard to put our customers at the heart of everything we do, this is no time for self-congratulation,” said retail and business banking chief Ashok Vaswani.

“Even one unhappy customer is one too many which is why we must always strive to learn lessons on how we can do better.”

The next biggest brand by complaints was credit card firm MBNA with 237,103, a fall of 12 per cent.