Bangkok 2049: What do the next three decades hold for this neon metropolis? 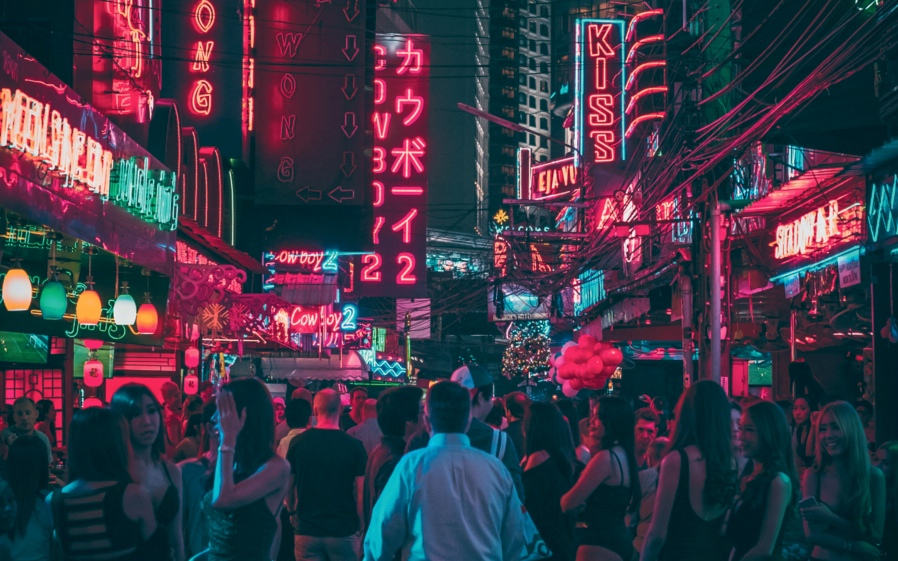 It looked like volleyball from afar. Up close, I realised the players were only using their feet. And the ball was hollow; a spherical rattan of bamboo. Sepak Takraw (or “Muzzle”) was being played with brio by a group of local boys on Phutharet Square, a Thai time capsule in Old City Bangkok.

They invited me on court. I scored and bowed out on a high. Around the play area, locals were sat at toy-store plastic tables swapping plates of saucy, spicy Chinese bites. There were hand-hewn egg noodles, dumplings, spring rolls, honey-glazed red pork, pork brain soup and pale pork balls.

A harlequin festoon hung above each table providing just enough light for me to mooch in the gloaming, looking for a seat. Before long, a group of ten or so animated lads – smart in their True Internet uniforms – offered me one, along with beer and a bowl of hokka soup noodles. It came from a mama-&-papa kitchen over the road called Phraeng Phuthon.

Read more: The unexpected consequences of gorilla conservation in Uganda

I snarfed and slurped between answers to, “Which football team do you support?” “First time in Bangkok?” “D’you like pork?” I’d have been overwhelmed were it not for their balmy charm – and the quality of the street food. What a far cry from the lens-friendly dude food back home.

Ahead of visiting Bangkok I’d spoken with someone who knows more about the place than me. Her concern was that it’s being modernised at a pace, and in a way, that’s tantamount to its gelding. Thailand’s street food vendors, in particular, have been hit by the ‘forces of gentrification’. Pork balls, facing the chop.

New Internationalist reported earlier this year that some 17,000 street hawkers have lost their licences across the city since 2014. The feeling among protestors is that this is part of a wider attempt by the Bangkok Metropolitan Administration (BMA) to sanitise. The spark and spirit of Bangkok’s markets and pavements – part of the city’s ecosystem and one of its principal draws – is under threat. Thailand also features regularly in overtourism lists. I can vouch: Wat Pho – a megaplex of temples near the Royal Palace – was a backpacker, selfie-stick soup.

So where can one still go to appreciate the best of the city without being elbowed to death by the hordes?

My interest was piqued from the main road (Thanon Tanao) by the noticeable change in architecture: a pared-back Sino-Portguese style gives the clutch of streets in the Sam Phraeng neighbourhood a village feel. In Thai culture every day of the week has an assigned hue. Reigning monarch King Rama X was born on a Monday, and Monday – contrary to what New Order might tell you – is a yellow day. The buildings here are painted in a fetching lemony pastel to honour him.

The hope, though, is that this new-found ‘eternal prosperity’ doesn’t rid Bangkok of its real, old, proper bits altogether.

On one corner of my new favourite square Natthaphon has been putting odd toppings (beans, sweet potato, palm fruit) on fresh coconut ice-cream since the 1950s. Behind us, a local has gone from one fix to the other, converting his grandfather’s classic car garage into a coffee shop. Unfinished works spill onto the street: a mint-condition Austin Mini in tasteful grey; a clapped out 1930s gangster-style Ford. Indoors is an oily tribute to automotive salvage hunting: driver’s-club plaques and chrome fenders ornament the walls like trophy antlers. The coffee, served Thai style with condensed milk, is sweet and cold and strong.

Perhaps the most conspicuous example of Bangkok’s push for clean and new is the nearly finished retail and entertainment complex “Icon of Eternal Prosperity”. Iconsiam to its friends. After the wooden charm of Old City, this angry-angled megastructure felt quite alien. A $1.67bn spaceship, hovering on the banks of the Chao Phraya, tractor-beaming captivated consumers.

On board, the experiment is to see whether we can be convinced and compelled by its ersatz set pieces and heritage trompe-l’oeils. Indeed, while its frame and scale are odes to Brave New Bangkok, much of the decoration aims to convince you of the opposite. The foyer is laid out as a sweet-smelling, gently twinkling, river market at night. Old ladies in full vintage regalia sit in boats preparing coconut pancakes for nobody. Gold pillars and village-life frescoes are the spit of those found in the city’s big temples. Appropriation, parody and a lack of sympathy. To culture and character what Cillit Bang is to soot and grease.

Many around me were mesmerised. And, well, fine: it is, if one is happy to ignore the hoax, a festival for the senses. The hope, though, is that this new-found ‘eternal prosperity’ doesn’t rid Bangkok of its real, old, proper bits altogether. Bits such as I saw on a day-long, 20km bicycle tour with Bangkok’s finest lycra-clad guide, Little Finger.

We started in Yan Nawa to see its eponymous boat-shaped temple, where needy buddhists come to buy amulets for luck. From there, she pedalled us north, along the river, via maze markets, ancient Chinese shrines and crumbling sandstone mansions. To fill the gaps, garrulous Little Finger expounded on Bangkok’s history: “Thailand was never fully colonised, mainly because of the king’s friendship with Tsar Nicholas II…”

Busy poking my head round the corner of every corner, I suddenly found myself in the way of a passing monk, his blanched saffron kasaya signalling gravitas. He stopped and spoke in that compassionate way that monks tend to. Beginning, apropos of nothing, on a potted history of Buddha himself (prince from India; good guy for 10 incarnations in a row; became perfect; hit nirvana) he then turned to a lament on the present state of Buddhism: “Temptation in the world today is changing things. There is a lack of monks teaching us well.”

Over the river again, in the Thonburi district, we visited Wat Kalaya, a temple dedicated to travellers. We left our bikes at the entrance next to a clutch of chain-smoking men and women playing “Indian chess”. Frowns and a fast pace suggested it was serious. While this ‘second class’ temple can’t compete with the gilt girth of Wat Pho, its quietude means there are fewer snapbacks interrupting your view of the monks who serry for prayer at 8am and 4.30pm daily. Our afternoon viewing was one I shall never forget.

My hotel, the venerable Peninsula, seems keen to uphold tradition too. I was encouraged to help in the giving of alms to a visiting holy man. He passes by the hotel’s ‘spirit house’ everyday to receive edible charity. But not all of Bangkok’s traditions educe zen-like calm: hours later I was on a nearby lawn having my first ever muay thai lession. It was kid gloves from my kindly coach; a big kid in gloves from me. Exhausting, but affirming. For those bent on more of a Van-Damme-style, spit-and-sawdust session, head for Mankong Phranai Muay Thai Gym near Lumphini Park. 200 Baht (around £5) is enough for a one-on-one lesson with an ex-pro who will make you sweat and swear.

It is with these few examples of Bangkok’s heritage that I grasped the dichotomy of its character: cerebral and visceral, calm and chaotic. The contrasts are irresistible.

While backstreet adventures will dominate this sort of trip, time should be allotted to Bangkok’s high-end. Beyond the riverside splendour of The Peninsula, Michelin-star Gaa is a worthy example of the city’s positive move to modern. An eclectic Thai-Indian fusion comes from a kitchen with a Noma-trained chef at the helm. I peaked early on its 14-course tasting menu: the second dish, a revelatory ‘savoury betel leaf’, served with a Marlboro pinot noir, was without doubt the best wine-to-food pairing I’ve ever tried. Sorry Heston. The only thing missing was a little square outside to play Muzzle.

Inspiring Travel Company (01244 435077; inspiringtravelcompany.co.uk) offers a three-night stay at The Peninsula, Bangkok (peninsula.com/bangkok) from £1,075 per person. Based on two adults sharing a Deluxe Room including daily breakfast, flights and transfers.