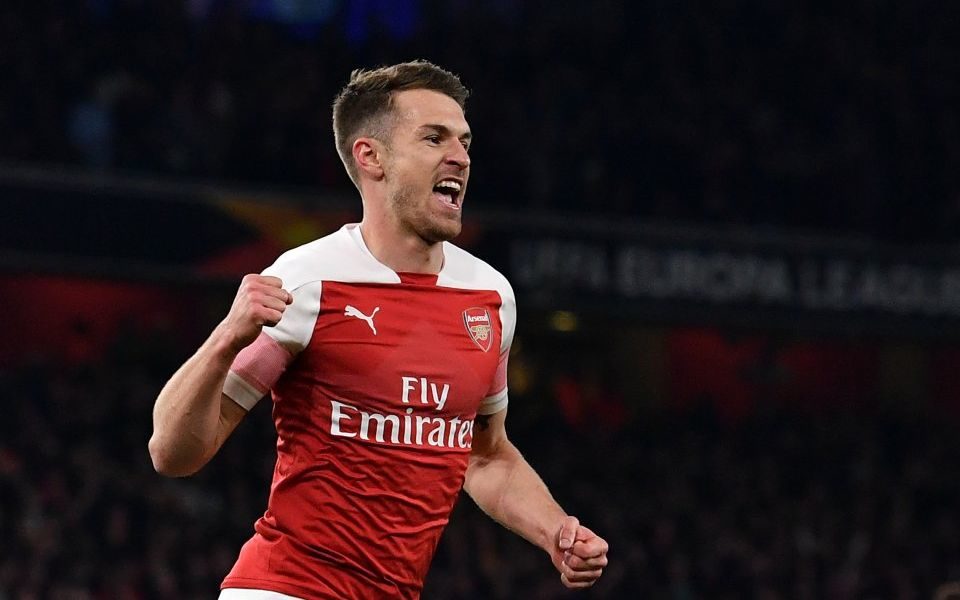 Unai Emery can appear a man struggling to contain a thousand competing impulses but if the Arsenal manager erred towards conservatism when he first arrived in England then he has surrendered to his more attacking urges lately.

And it feels good for the Gunners, who reaped the benefits of another bold Emery selection that contained two strikers, Mesut Ozil and Aaron Ramsey with a convincing 2-0 win over Napoli in the Europa League on Thursday night.

First-half goals from the outstanding Ramsey and terrier-like Torreira put Arsenal in sight of the semi-finals for a second season in a row, although they might have wrapped up the tie in this first leg had they been more clinical.

As it is they have a two-goal advantage to take to Italy next week, where they will have to improve on their dire recent away form if they are to avoid a chastening return leg and progress to the last four.

Whether it is a desire to leave Arsenal on a high, confidence boosted by signing a pre-contract agreement with Juventus or something else entirely, one thing is for certain: Ramsey is in the form of his life.

The Wales midfielder dictated the game from a deep midfield role yet still provided an attacking threat, as exemplified by his 15th-minute opening goal.

Ramsey helped start a move in his own half that involved Ozil, Alexandre Lacazette and Ainsley Maitland-Niles before he swept past visiting goalkeeper Alex Meret from 12 yards.

With Ozil in mischievous form and Torreira snapping at Napoli heels, Arsenal controlled the midfield and the Uruguayan added a deserved second goal, albeit aided by a ricochet, in the 25th minute.

He picked the pocket of Fabian Ruiz 35 yards out, drove into space, turned Ruiz when the Napoli midfielder tracked him and fired a shot that deflected in off Kalidou Koulibaly past a wrong-footed Meret.

One of Emery’s notable achievements has been getting Arsenal up for the visit of big opponents and this was another case in point.

Just as in home wins over Tottenham, Chelsea and Manchester United this season, the Gunners played with a courage, purpose and resolve — particularly in the first half — conspicuously absent in recent seasons.

Perhaps here it simply matters more to Arsenal than to Napoli. The Italians, a clear second in Serie A, are all but certain to qualify for the Champions League next season regardless of this competition.

Emery’s men, on the other hand, have a far slimmer chance of finishing in the domestic top four, so success in the Europa League — and consequent promotion to the Champions League — would mean more than a piece of silverware.

This wasn’t just Arsenal versus Napoli; it was also a meeting of two of the most decorated coaches in Uefa club competitions.

As one of only three managers to have masterminded three European Cup triumphs, Napoli manager Carlo Ancelotti has the more prestigious CV.

Emery, however, is indisputably the king of the Europa League. The Spaniard led Sevilla to the title three years in a row and has managed more games than anyone else in the competition.

This was his 70th in the Europa League. He will be increasingly hopeful of making the final in Baku on 29 May the 74th.

It’s advantage Arsenal, but their away form means that next week’s trip to Naples is sure to be a nervy occasion nonetheless.

While they have now won eight in a row in all competitions at Emirates Stadium, the north Londoners have been woeful on their travels.

They have lost seven and won just two of their last 11 away games, and one of those was at Blackpool in the FA Cup. The cauldron of the Stadio San Paulo will be a different proposition to Bloomfield Road.

Pierre-Emerick Aubameyang, Lacazette and Ramsey missed chances to make the trip a more comfortable one. A two-goal lead ought to be enough, but they may yet regret failing to make it more.