AIG and the All Blacks brand: How New Zealand dominates rugby on and off the pitch 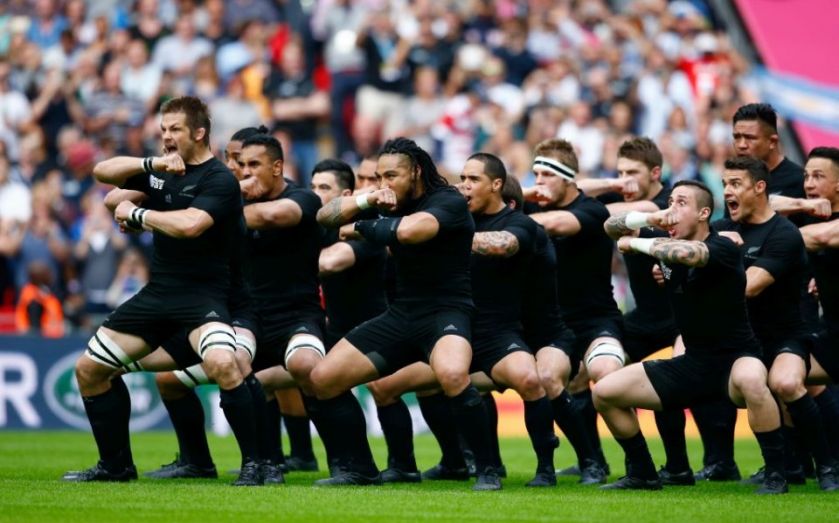 New Zealand’s opening two wins over Argentina and Namibia at the World Cup will not rank particularly high in the annals of the country’s proud rugby history.

Yet even in what was a tense and at times ill-disciplined 26-16 victory over Argentina on Sunday, there was enough in the All Blacks’ opening performance to understand both why they are favourites to retain the tournament and why they are arguably the biggest brand in world rugby.

The All Blacks’ iconic kit – one of sport’s great tapestries – was more striking than ever with every single player equipped in the same black Adidas boots to match black shorts and shirt for the first time.

And whether it was the flawless kicking of Dan Carter, the wrecking ball introduction of Sonny Bill Williams or the team’s ice-cool professionalism to get the job done, there was enough in the performance to demonstrate why the All Blacks have become so synonymous with sporting supremacy – and why association with the brand is so attractive to businesses.

Read more: Eight reasons why the All Blacks will win the Rugby World Cup 2015 (and three why they might not)

“They’re recognised as one of the most high-performance organisations in the world in all of sports”, says Daniel Glantz, global head of sponsorship at AIG who, in 2012, became the All Blacks’ first ever shirt sponsor.

“And what we’ve found is that they actually have the best record ever in all of sports – even better statistically than USA basketball. I think it’s a testament to New Zealand Rugby as an organisation that it’s not really a local brand, it’s really recognised as one of the most powerful global sports organisations in the world.”

AIG teamed up with the All Blacks less than two weeks after the company rebranded as part of an image revamp following its 2009 bailout by the US government.

The partnership was as much inspired by how the values instilled within New Zealand rugby's culture could assist AIG’s makeover, as much as the commercial benefits of being associated with rugby’s globe-trotting world champions.

As detailed by author James Kerr in his investigation into the winning culture of New Zealand rugby, “Legacy”, one of the cornerstones of the team’s identity under both previous coach Graham Henry and current boss Steve Hansen was simple, crucial and easily applicable elsewhere: Better people make better All Blacks.

“I think for AIG the way we looked at it was not just strategically but also alignment with our organisation internally with our employees”, Glantz told City A.M.

“It’s just the character of the folks involved. Not just the players, it’s the management, the organisation as a whole. AIG looks to align with the world’s best organisations…look across the board in sports and you’d certainly say that New Zealand rugby is top notch.”

Bryn Anderson, chief operating officer at brand valuation firm Brand Finance, says: “Sponsors want to be associated with the characteristics in which the All Blacks brand personifies on and off the field. The All Blacks brand represents: strength, success, humility, mana [a Maori concept of honour and influence], pride, determination, and heritage.”

For New Zealand Rugby chief executive Steve Tew, an alignment of those values was essential when the organisation finally decided on its first ever shirt sponsor – 16 years after rivals England first enjoyed the financial windfall that came from sporting BT Cellnet on its shirt.

“There is a point where you can over commercialise something as important as a national sports team or, in the case of New Zealand, a team that represents what a lot of people love about our country," ” Tew explained to City A.M. "But you’ve also got to live in the real world and we are in a national, global marketplace for talent and we’ve got a responsibility to grow the game in New Zealand.

“Before any arrangement with a commercial partner we do our due diligence, as I would expect a partner coming in to talk to us would do. I personally met with Bob Benmosche, who was then the CEO of AIG and had been brought in to resolve their financial troubles.He and I discussed a whole lot of things and we were comfortable with the way the two organisations saw the world, they way they want to operate, the values that they live by.

“I got a good understanding of what he was trying to achieve by finding a sporting entity to partner with. We went away and looked at whether we could deliver on it, felt that we could and I think they’ve been very happy with the results.”

Just as every pass and tackle at this year’s World Cup will be dissected by New Zealand’s rugby-obsessed population, so to are the decisions made by Tew and New Zealand Rugby that will affect a team and brand that has served as such a strong source of national pride ever since the 1905 “originals” won 34 out of 35 games on the All Blacks' first ever tour of Europe and the United States.

An American insurance company placing itself on such a sacred jersey – that was a decision that could have backfired spectacularly if not handled with care, as Glantz readily admits.

He said: “We were fully aware of the sensitivities of the sponsorship and in fact we incorporated the senior leadership team within New Zealand rugby; Richie [McCaw], Dan [Carter], Conrad [Smith] and involved them in the process.”

“By removing the box [that traditionally encircles the AIG logo elsewhere] – specifically for the All Blacks jersey…it kind of gives off the impression that we have nothing but respect, that it’s a partnership not just a sponsorship and that we’re open to compromise.”

“New Zealand citizens are all shareholders in the All Blacks brand”, says Anderson, “Not in the typical financial sense, but from an emotional sense. It was a master stroke by AIG to suggest their logo should be shown on the front of the All Blacks shirt in an understated way, smaller than one would expect. This was done in recognition to the widely held view in New Zealand there should ‘not’ be a sponsor logo on the front of the beloved All Blacks shirt.”

So far, so good for both AIG and the All Blacks, whose strong relationship with its sponsors was reflected in a number of renewals last year. New Zealand Rugby is set on ensuring the All Blacks’ history of success continues not only within its commercial partnerships and that expectations are managed and met.

This evening, for example, players including Richie McCaw are due to make an appearance with former player Sean Fitzpatrick at Canary Wharf to meet the public at AIG’s fan engagement event at which visitors can face a virtual reality haka.

“We’re very fortunate that we’ve got a team and a history that sort of speaks for itself," says Tew. "The winning record of the All Blacks over 130 years is something that a lot of people are very proud and it’s definitely opened some doors.

AIG’s fan experience, AIG Touchline, is popping up in Canary Wharf this evening (normally based on South Bank). Head down at 4.30 to meet All Blacks squad players and Sean Fitzpatrick for an interactive Q&A and fan engagement session. Take your place on the field and experience the All Blacks’ electrifying haka like never before.