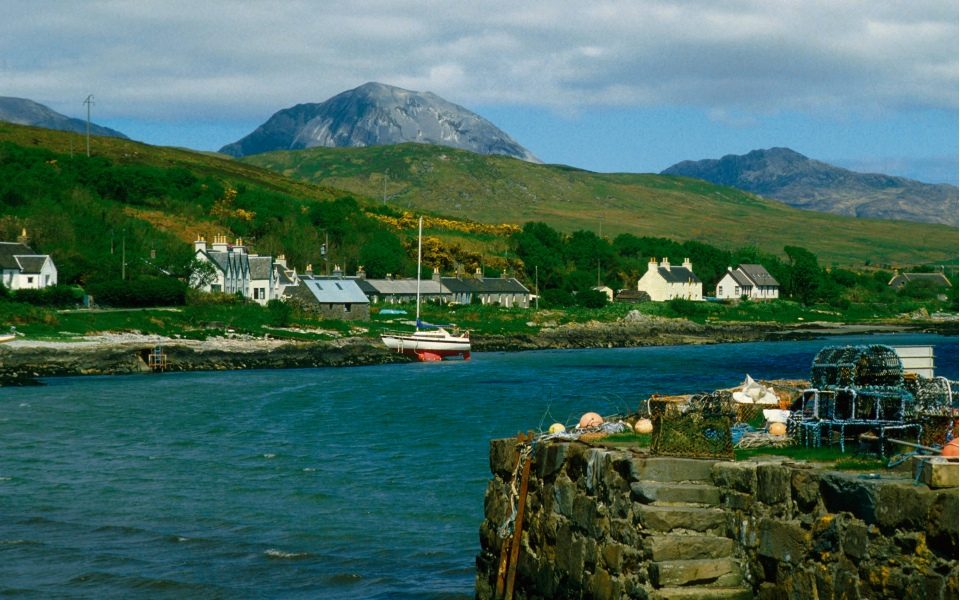 The Hebridean island of Jura has a particular fascination with 1984. Time seems to stand still here, like the early morning mist that lingers about the island’s rolling valleys. But that’s not to say that the small population obsesses over the goings on in Dallas, wears leg warmers, or puts up with Madonna’s Like a Virgin blasting out of tape-decks in teenage bedrooms.

To the people of Jura, the year that witnessed the start of the miners’ strike is a byword for a dystopian reality in which subversive thought could get you into trouble, despite the lack of a police station on the island, and just one special constable on duty. As I soon discovered, Jura is an island intricately linked with George Orwell’s Nineteen Eighty-Four, a novel so influential its title has become shorthand for totalitarianism.

In the late 1940s, when Orwell was a resident on Jura, the island was a long way from anywhere. Seventy years after the work was first published, Jura has lost none of its edge of the world feeling. Its seclusion is precisely what attracted Orwell to this 27-mile long island, as he sought out the head-space he needed to complete what was then known as The Last Man in Europe. Even today, have the wrong mobile phone provider and you’ll find yourself isolated from the outside world, as I realised too late myself.

Reaching Jura is far easier than the 19 lines of description Orwell was forced to send to visiting friends, who made the journey north from war-ravaged London to see him. The spectacular drive takes me from Glasgow through one of Scotland’s two national parks, Loch Lomond and the Trossachs, while the couple of hours needed onboard the CalMac ferry are ones of endless spectacular coastal photographic opportunities. They get me first to the malt whiskey haven of Islay, and then across the narrow sound between islands to Jura itself.

Still the wildest of the Inner Hebrides, which cluster around the Scottish west coast, the human population of around 200 is far outnumbered by the 5,000 red deer that roam the open grassland landscapes, and from which the island is said to take its name. In the Old Norse of the Viking invaders, Jura means ‘deer island’, and it’s easy enough to spot them even from the roadside, mingling with the island’s small herds of cattle.

The roadless west of the island remains almost entirely uncultivated and uninhabited, with the population largely clinging to Jura’s eastern reaches in and around the village of Craighouse, which looks out towards the Small Isles, and Kintyre Peninsula back on the Scottish mainland.

It’s Craighouse that’s the location of the island’s sole hotel and pub, as well as its only whiskey distillery, clustered together in the sort of white-washed stone and brick buildings you might well expect of a small Scottish island. The switching wind brings with it a perfume that shifts between the warm Weetabix smell of the distillery’s mash tun, and the rich scent of seaweed.

The distillery’s 1984 vintage is the most expensive of the whiskeys it produces. The gin-clear waters used filter down through the boggy peat of the Paps into Market Loch, to create a single malt worth £750 per bottle.

Read more: When buying spirits you shouldn’t rely on age as a sign of quality

The Jura Hotel’s restaurant menu confirms my place north of the border: haggis pâté with a rich, mango-like neep (swede) chutney and tattie (potato) oatcakes, followed by macaroni and Scottish cheddar cheese. Dessert comes in the form of a tub of ice cream from the Isle of Arran I buy at the community store – again, an essential one of a kind for the island.

But Craighouse wasn’t nearly secluded enough for Orwell, who headed further north still, where the island gets even more rough and rugged. It’s a journey I begin with Alex Dunnachie of Jura Island Tours, whose mother-in-law was one of those intricately linked with Orwell’s stay on the island, taking the completed typewritten manuscript of Nineteen Eighty-Four on the start of its long journey down south to its publishers in London.

She will have called at Barnhill, the long-neglected farmhouse which Orwell chose to occupy for most of 1946-48, where he wrote in the top-floor attic room amid a backdrop of mountains, slowly adding to his frugal possessions. At the time it had no electricity or phone line. Fresh water tended to run out in the summer months, and the nearest store was a 16-mile round trip away.

Spend any time in Jura’s north and you’ll soon see why Nineteen Eighty-Four was almost entitled The Last Man in Europe. Hike to Barnhill across the Paps, the breast-shaped mountains in the middle of the island, and it would be easy to believe that there’s no one else left. After London, the sound of an aircraft is a rare one. Scattering the red deer as you go, you might just catch sight of a vehicle driving in either direction along the single-track road – the island’s only road – bisected by cattle grids.

Clinging to the eastern edge of the island, it comes to a halt three miles short of Barnhill. Orwell walked so much as a result he wore out his difficult-to-replace size twelves, but modern renters of this holiday let with a difference are more likely to arrive via four-by-four or by boat.

The Corryvreckan Strait that separates Jura from Scarba laps the end of the garden where Orwell tended to his vegetables and stalked rabbits for the pot. Sea eagles gliding on the thermals, and seals basking on the rocks, are still more common than meeting any other human beings.

It would be Orwell’s final home. His life could have been cut even shorter were it not for luck, and the islanders’ nature of looking out for one another. Returning from a fishing trip in his small wooden motorised dinghy, Orwell was caught out by the Corryvreckan Whirlpool, the third largest in the world. A tumultuous mass of water officially classified as unnavigable by the Royal Navy, it forced him half-drowned to the uninhabited and barren isle of Eilean Mór, from where he was rescued cold and wet several hours later by passing fisherman.

It wasn’t too long afterwards that one of the twentieth century’s most important voices died of tuberculosis in a London hospital. Just a few months after the first edition of Nineteen Eighty-Four was published, at the age of 46, he was forced to leave the island he described as ‘one of the most beautiful parts of the British Isles’.