In the world's strongest league, Manchester City prove they are the best of the best 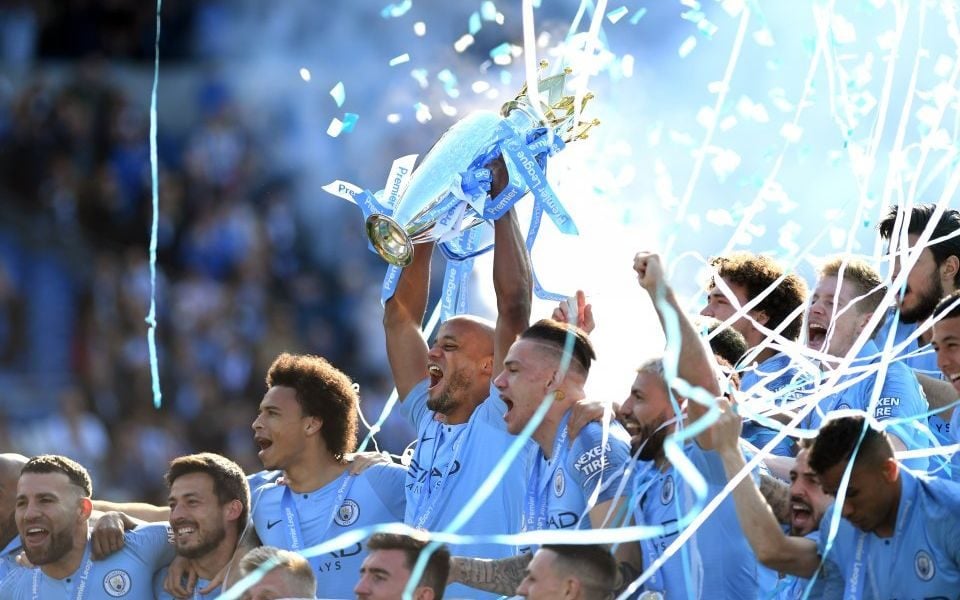 The midweek may have belonged to Liverpool and Tottenham, but the season is Manchester City’s.

Pep Guardiola’s team on Sunday issued a timely reminder to the Premier League that they remain the best in the land, becoming the first to retain the trophy since 2009 with a 4-1 final-day win at Brighton.

And at the close of a week in which England’s clubs made a compelling case that they should be considered the current strongest in the world, City proved beyond doubt that they are the best of the best.

In the end there was nothing to match the extraordinary drama of Liverpool and Tottenham’s Champions League comebacks against Barcelona and Ajax just days earlier. But then how could there be?

Liverpool kept up their side of the bargain, taking an early lead at home to Wolves to go top of the table and going on to win 2-0.

But while City fell behind in the league for the first time since January to a Glenn Murray header, it lasted all of a minute and goals from Sergio Aguero – a specialist in these games – and Aymeric Laporte had them safely in front by half-time.

Instead we got an archetypal display of City’s controlled excellence, a fitting final act in a title race that pushed them to their limits.

Further goals in the second half from Riyad Mahrez and Ilkay Gundogan, both strikes expertly placed past Mat Ryan from the D of Brighton’s penalty area, ensured they kept their noses in front of Liverpool.

The final margin of victory was just one point, the same gap that City have resolutely preserved since the first weekend in March; incredibly, both teams won every single game after that.

Anfield nostrils had scented another miracle when news of Murray’s goal reached Merseyside, with Liverpool already one up through Sadio Mane – the first of his two goals, taking his top-flight tally to 22 and ensuring he shared the Golden Boot with team-mate Mohamed Salah and Arsenal’s Pierre-Emerick Aubameyang.

Unlike Barca had on Tuesday, however, City refused to buckle, and Jurgen Klopp’s team instead received the dubious honour of being the Premier League’s best runners-up, following their record-breaking points haul of 97.

Liverpool needn’t wallow. They have a second successive Champions League final to look forward to on 1 June and could yet finish the season as European champions.

In time, Klopp may reflect on the cost of four draws in the space of six games between late January and early March, but in the last 12 months they have turned a 25-point chasm with City into a single-point gap and will rightly begin the next campaign as their most feared rivals.

Mane took his tally to 22 league goals but it proved in vain for Liverpool (Source: Getty)

The truth is that City and Guardiola have set new standards. They raised the bar with a record-breaking season last year, amassing 100 points, and only reaped two fewer this time. For the former Barcelona and Bayern Munich manager, this is an eighth league title in his last 10 seasons.

City will likely complete a domestic treble on Saturday by winning the FA Cup. If they do, it will be Guardiola’s fifth season of lifting at least three trophies. There is no shame whatsoever in being second to them.

City’s challenge now is to preside over an era of dominance to rival that of their neighbours. When Manchester United retained the title a decade ago it was their third championship in a row and seventh in 11 years.

There is also the Champions League, the prize City crave most and that continues to elude them and Guardiola since his departure from Spain.

All that is for the coming weeks and months; right now they are the best of the best and that is enough.