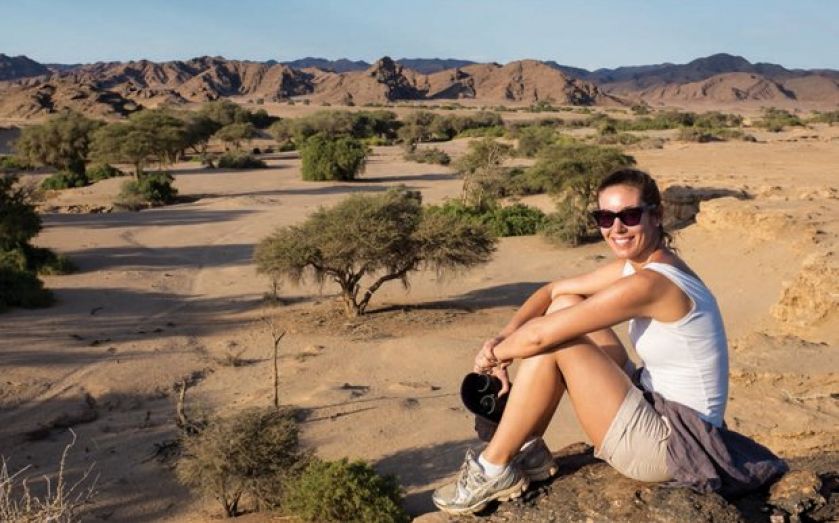 When it comes to seeing game in the wild, Namibia beats South Africa, Botswana and Zimbabwe

Everyone has their ultimate fantasy destination. Ever since I peered out of an aeroplane window on a flight to Cape Town and saw the endless terracotta sand of the Namib Desert, Namibia has been mine.

Now I was actually finally experiencing it. A Cessna Caravan light aircraft – organised, along with everything else, by Wilderness Safaris – took me on a 40 minute hop from the capital Windhoek to the west coast settlement of Doro Nawas. I changed to an even smaller plane and continued an hour north, landing on the Skeleton Coast. Climbing out of the plane, you’re greeted by an eerily silence. It’s one of the driest places on earth and looks like the surface of Mars.

As soon as I climbed out of the aircraft, the sun started to burn my shoulders. A Land Cruiser completed the trip to camp: six beautifully presented tents, each built on concrete floors and perched on wooden stilts. With clever shutters, the afternoon breeze acted as a great air-conditioning unit.

For the next three days I was up at sunrise and out till sunset exploring the landscape and spotting the magnificent desert-adapted animals. For me, the highlight was a four-hour early morning drive on which we spotted springbok, oryx, giraffe and jackal.

The Skeleton Coast earned its macabre name because of all the bones of ships, sailors and whales that have fallen foul of its treacherous currents. With 500 miles of remote coastline, my guide Clement explains I’m likely to be walking on sand untouched by my fellow man. After a delicious picnic next to the rusting remains of a shipwreck, a plane came and flew us the ten minute trip back to camp.

Other incredible moments included tumbling down the massive custard-yellow sand dunes; following fresh paw prints and the bloody trail of a lion kill; a sunset bush walk to find a herd of desert elephants. After three days marvelling at the vistas of the Hoanib desert, it was time to board a plane again and head an hour east to experience another of Namibia’s wonders – Etosha National Park.

Given that it’s impossible to see everything the country has to offer in a week, this is a great antidote to the coast, offering a completely different landscape and awesome game viewing. Half the size of Switzerland, Etosha is one of the biggest, most famous reserves in the world. Flat, dry, dense bushlands stretch to the horizon, which shimmers in midday temperatures, easily hitting 45 degrees.

There are four camps to suit all wallets. Anderson offers comfortable, well-priced accommodation perfect for families. On the other end of the scale is Little Ongava – high-end luxury bush living great for honeymooning couples. I chose to stay somewhere in the middle, at Ongava Tented Camp.

Waterbuck and impala grazed just feet away from my veranda, and each night I had a ranger, armed with a rifle escort me back to my tent – lions are regular midnight visitors.

Bono, my guide, took me out every morning and evening to spot game. I’ve experienced safaris in South Africa, Botswana and Zimbabwe, but Namibia beat the lot.

On one morning drive I spotted zebra, springbok, impala, oryx, waterbuck, giraffe and warthogs, all jostling for place at a waterhole. Then came a sharp bark, a warning call from the impalas, and instantly the mood changed. With languid strides, a male lion sauntered out of the bushes for a morning drink. He’s followed by three equally big brothers. Next came the lionesses, who appeared from nowhere and called quietly for their cubs to follow.

At another waterhole the following morning I counted a 40 strong herd of elephants, trumpeting and splashing in the water like a scene at the lido. After 10 minutes, they disappeared, ghosting silently back into the bush as if they were never there.

Bono also took me on an evening trek, on foot to spot rhino. Perilously endangered across Africa, the black and white rhino are doing relatively well in Namibia thanks to the country’s conservation and anti poaching efforts. Staying downwind, we zig-zagged behind a grumpy black rhino who looked like he had been in the wars – rhinos like a scrap.

The only drawback is Namibia’s size. It’s so big you can’t hope to do it justice in one trip. Never mind; I now have an excuse to go back. Plans for next time include taking a hot air balloon ride over red sand dunes of Soussusvlei in the south. I’m counting down the days.