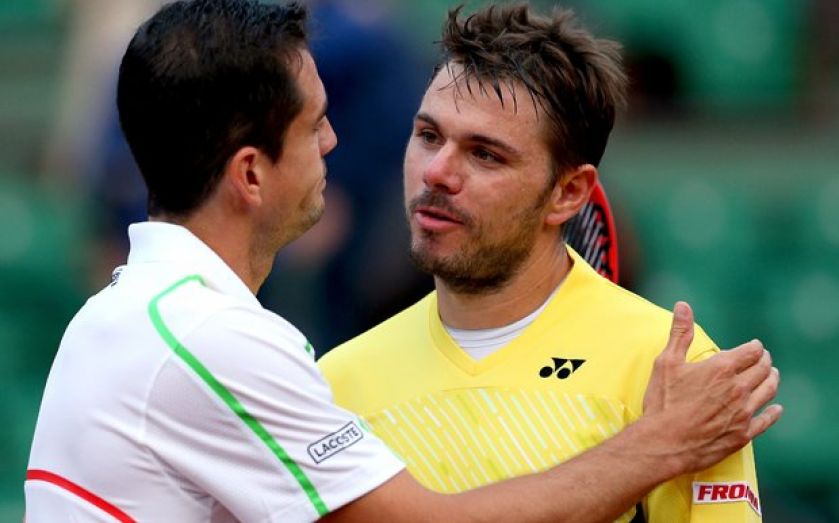 AUSTRALIAN Open champion and world No3 Stanislas Wawrinka crashed out at the French Open first round with an error-strewn performance against Spain’s Guillermo Garcia-Lopez.

Wawrinka, situated in the same quarter of the men’s singles draw as Britain’s Andy Murray, made 62 unforced errors on his way to a surprise 6-4, 5-7, 6-2, 6-0 defeat at Roland Garros.

The Swiss star, whose form has been indifferent since winning his maiden grand slam title in January, lost a recent Davis Cup tie to Kazakhstan’s Andrey Golubev – Murray’s opponent on Court Suzanne Lenglen this afternoon.

Murray, seeded seventh, missed last year’s tournament with a back injury and hopes his return can launch a consistent run of form ahead of the defence of his Wimbledon crown.

“I’ve got a big focus on these next few weeks and hopefully I can have a good run,” said the Scotsman.

“I need to try to keep that consistency for the next four or five months if I can.”

British No3 James Ward was satisfied with his French Open debut performance after coming close to springing a surprise in a rain-disrupted contest against No17 seed Tommy Robredo, which ultimately ended in defeat.

Ward, who won three qualifying rounds to reach the main draw, took the opening set against the Spaniard but succumbed 4-6, 6-4, 6-2, 6-4.

He said: “I gave myself a chance and I’m pleased with my efforts.”

In the women’s draw, 2012 champion Maria Sharapova progressed but No17 seed Roberta Vinci was beaten.