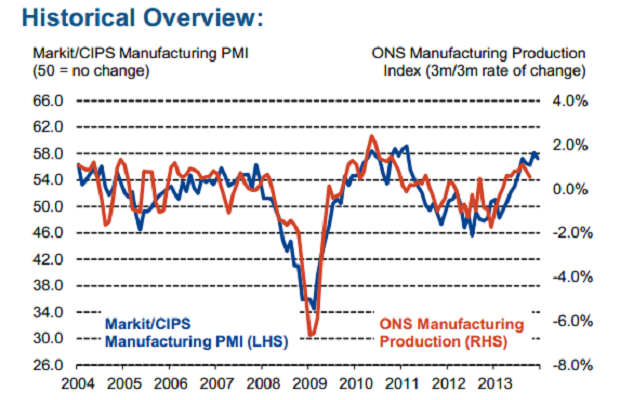 The UK's manufacturing sector saw slower growth at the end of 2013, according to Markit's purchasing managers' index (PMI).

The survey for December came in at 57.3, remaining on track but just below the estimated 58.0 and November's 58.1.

Rates of expansion in new orders and production stayed among the highest in the 22-year history of the survey, however, with job creation still high (second to November's two-and-a-half year record).

On its current track, the sector should achieve output growth of over one per cent in final quarter while filling around 10-15 thousand jobs, continuing its positive contributions to both the broader economic and labour market recoveries.

Meanwhile, PMI numbers for the Eurozone showed improvement in activity during December, reaching a 31-month high.

The headline number was in line with consensus, at 52.7 (from 51.6), fuelling hopes that the fourth quarter saw some modest upward momentum, and that 2014 could be a better year.

In Italy, activity in the sector picked up to a 32-month high. Spain saw return to growth which, says IHS Global Insight's Howard Archer, "lifts hopes that both economies managed to grow in the fourth quarter of 2014 and can gradually improve as 2014 progresses."

It was good news for Greece, too, as its PMI came in at 49.6 – up on November's 49.2 and nearing stabilisation (50 or above suggests growth), after over four years of persistent contraction.

Things weren't so promising for France, however, as activity in December contracted at the fastest pace for seven months, adding, says Archer, to anxiety over the underlying health of the economy.