Turrican Flashback is a nostalgic paradise of synths and bullets 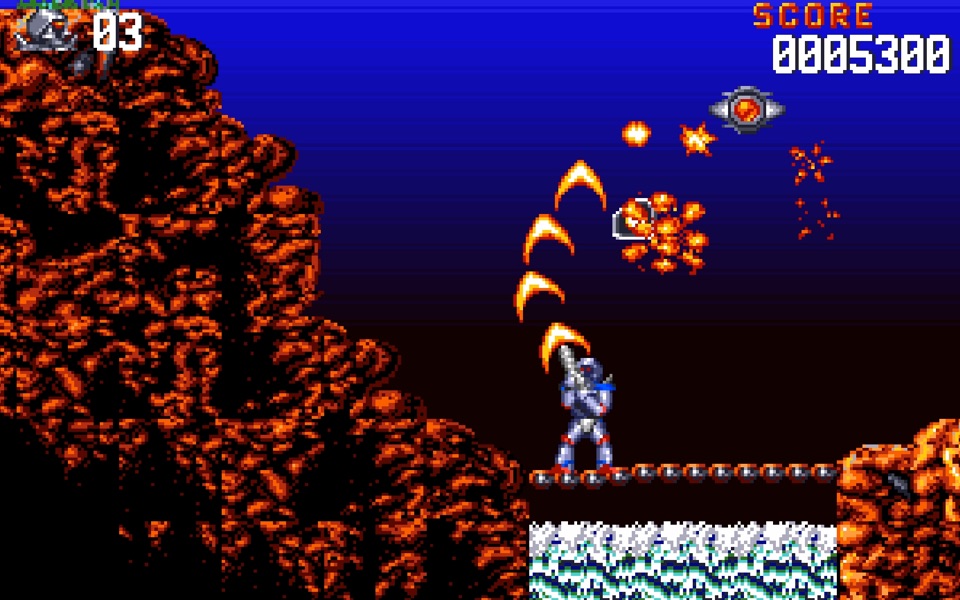 Nostalgia, as they say, is one hell of a drug, and in lockdown we’ve been getting very, very high. A generation of middle aged men – myself included – have helped push shares in Games Workshop through the roof as they rediscover the hobby that saw them through their teenage years. The Turrican Flashback collection, now available on Switch, scratches an itch that dates back even further, to a time when I was nine years old, playing games on my family’s Amiga 500.

One of the more prestigious titles in my adolescent games collection, I must have played through Turrican II a dozen times. It was among the first run-and-gun titles where exploration and discovery were just as important as reflexes. If you could find all of the hidden areas filled with extra lives, you could afford to bash your head against the occasional shmup sections and bullet-sponge bosses. And playing through a game with already floaty controls on a spongy joystick – I had no idea you could use a control pad or keyboard – meant I needed the safety net of those extra lives.

Thirty years later, I still remember the location of each and every one of them. This Switch version is a near perfect port, and my decades-old muscle memory is as sharp today as it was all those years ago. It helps that the Turrican games – collected here are Turrican, Turrican II, Mega Turrican and Super Turrican – have aged remarkably well, still standing up beside the glut of retro-inspired titles that have been released in the last few years.

I started with Turrican II, blasting through it in a single two-hour sitting. You play as Bren McGuire, presumably a friend of Sleve McDichael and Bobson Dugnutt, a hero who dons a ‘Turrican’ power suit that can transform into an invincible spiky wheel, to fight a foe called The Machine, who is poisoning people’s dreams. I think. It doesn’t really matter.

If there are graphical or gameplay improvements over the original, they are so subtly implemented as to feel completely natural. It looks good, in a 16-bit, pixel art kind of way, especially as you make your way towards the Alien-inspired later biomes, which must have risked a lawyer’s letter from HR Giger. There are also plenty of options to bring your experience closer to the original, including adding scan lines and curvature to mimic the shape of an old CRT monitor.

But it’s the soundtrack that really grabs you, a brilliant score by Chris Huelsbeck, full of dreamy, synthy tunes that do a huge amount of atmospheric heavy lifting – no wonder I occasionally find myself humming them in then shower.

It says something about the 1991 games market that I didn’t even consider trying to seek out the first Turrican game – back then a game was either stocked in my local games shop, or it may as well have not existed. Released just a year before Turrican II, the original is more of the same, albeit with slightly less graphical polish. It’s another perfect little slice of arcade action, a gauntlet of biomes punctuated by screen-filling boss encounters. It was here that I was thankful the Flashback developers implemented save states, given I suffered a couple of crashers that, back in the 90s, would have wiped my entire run.

Another innovation across the four titles is the ability to instantly rewind time by holding the left shoulder button, a nice accessibility option for those who want to play through a piece of video games history without overcoming its notorious difficulty spikes.

Mega Turrican, the third instalment and the first designed for consoles, makes use of the more powerful hardware afforded by the Sega Mega Drive. While clearly ambitious, it lacks the stripped-back charm of the first pair. It’s visually chaotic and the core innovation, a “plasma rope” you can use to swing to higher ledges, slows the otherwise frenetic gameplay. A full playthrough won’t take more than a couple of hours, but by the end it felt like work.

Thankfully the final game in the collection, Super Turrican, is like a greatest hits compliation, comprising elements of all three of its predecessors. Playing through it for the first time gave me the same rush of discovery I felt with Turrican II three decades ago, although it’s so similar in structure you could almost call it a remake of Turrican II.

Side-scrolling platformers may have come a long way since 1990 – just look at the gorgeous graphics in Ori and the Will of the Wisps – but this collection isn’t just about nostalgia: these are excellent titles, influential and important, and belong on the Switch of any aficionado of video game history.