Trump jokes to Putin at G20: 'Don't meddle in the election, please' 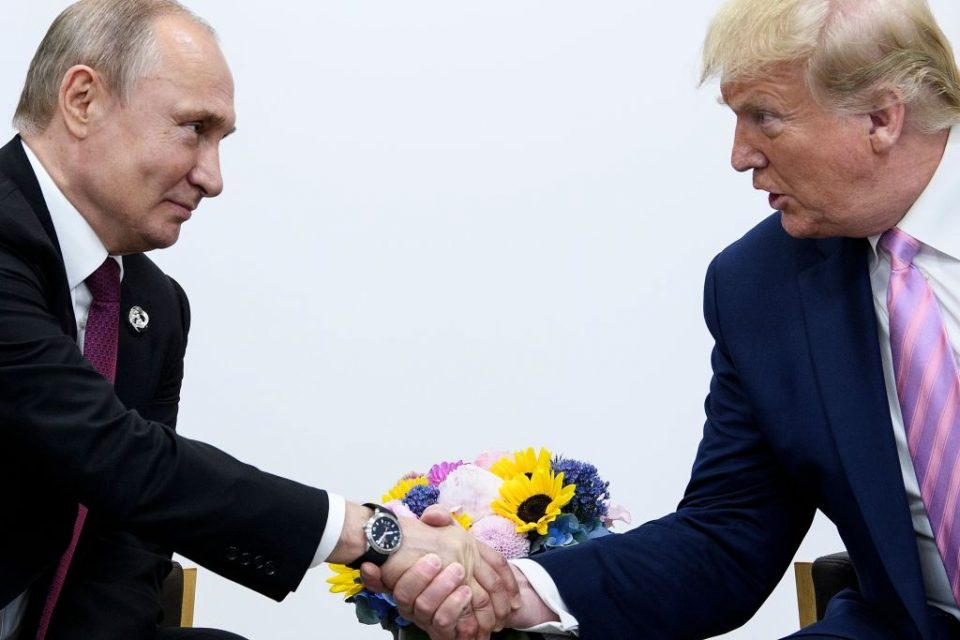 Donald Trump has playfully warned Vladmir Putin not to “meddle” in the 2020 US election, smiling and waving his finger at the Russian president.

The US president met face to face with Putin today as the G20 summit in Osaka gets underway.

He has been criticised in some quarters for appearing to make light of the scandal that resulted in a formal investigation of his campaign’s contact with Russia during his successful election in 2016.

Asked by a reporter whether he would address the issue in a meeting with Putin, Trump said: “Yes, of course I will.”

As the Russian leader smirked, Trump turned to his counterpart and pointed his finger, saying: “Don’t meddle in the election, please.”

A smile was maintained by Putin as the interaction was relayed to him by a translator.

Tensions between Moscow and Washington have been high of late, with Putin recently saying they were “getting worse and worse”.

However, Trump was keen to highlight the positives and was optimistic ahead of the pair’s first meeting since a highly-publicised summit in Helsinki last July.

“It’s a great honour to be with President Putin,” he said. “We have many things to discuss, including trade and including some disarmament.”

Trump cancelled a meeting with the 66-year-old at the last G20 summit in November, citing Russia’s seizure of Ukrainian ships, but wants to improve their relationship in order to tackle issues such as reining back North Korea’s nuclear designs.

“We’ve had great meetings. We’ve had a very, very good relationship,” Trump told media on Friday. “And we look forward to spending some very good time together. A lot of very positive things are going to come out of the relationship.”

Read more: Robert Mueller to testify before House over Trump links with Russia

Trump, who has been criticised for his overly-friendly relationship with Putin, also sought common ground by condemning “fake news” as journalists gathered to catch them meet.

“Get rid of them. Fake news is a great term, isn’t it. You don’t have this problem in Russia but we do,” he said.

“We also have. It’s the same,” Putin responded in English.