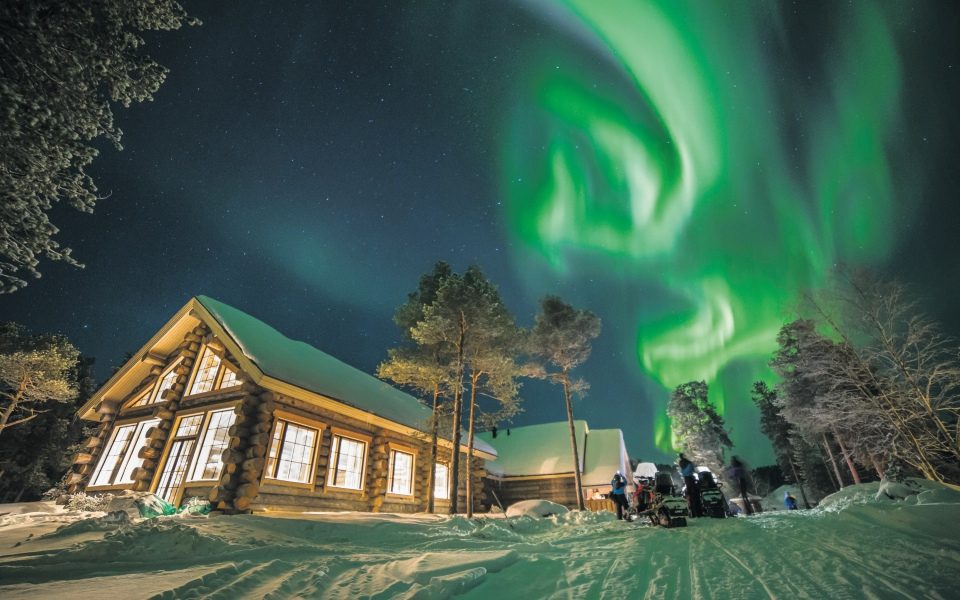 The fire fox runs at such great speed across the sky that sparks fly from his tail, streaking bright colours across the heavens. If you check out the Mozilla search engine logo, you will note how he wraps himself around the globe; but to see the fire fox’s resplendent light show in all its glory – to witness the Northern Lights – you must travel to the far north on a clear, dark winter’s night. He rewards those who brave the cold.

Twice a week, the FinnAir flight from Gatwick deposits unprepared Brits in Ivalo, a village 230 km south of the Arctic Circle. The polar night here lasts 43 days from late November until early January, and when I stepped out of the airport terminal in the late afternoon, it was a “balmy” minus 23 celsius.

I inhaled sharply, felt my tonsils shiver, and burrowed into my backpack for a second pair of gloves to pull on over the first.

Finns must learn to drive on ice before they can pass their test, which is just as well. The surface of the road is an ice sheet with a sprinkling of snow on top. In winter, there are roads which don’t even exist later in the year, but are simply snow strips cleared along the shortest routes across frozen lakes. On land the tarmac isn’t visible, and gritting it would be absolutely pointless. Driving north from Ivalo, however, there was not even a moment that the car juddered. The driver was in complete control, and once my eyes adjusted to the blackness, I focused instead on the dense pine forests lining the road, the boughs of each tree pulled down by the weight of the snow.

Wilderness Hotel Nangu is a beacon of golden light in the wild. We pulled up outside, and I hurried as fast as I could into the warm.

The usual thermal layers and ski suit just won’t cut it in this climate, so the first thing to do on arrival was to get properly kitted out. The hotel has a cavernous store of adult size thermal onesies, leather mittens, woolly socks, and boots you could probably hike to the North Pole in. Dressing up for the first time, hilarity ensued — no one looks elegant in a padded babygrow, after all — but though a certain amount of mobility is compromised, it was a price I was happy to pay not to freeze.

I contemplated spending the first night in. Hotel Nangu’s main wooden lodge is cosy, and I could see myself relaxing by the roaring fire with a mug of glögi, hot berry juice spiked with vodka. But aurora guide Jukka had other plans for me, and rightly so. I was on a three night break, which meant I had just three chances to see the Northern Lights. The forecast for tonight was good.

I strapped on big snow shoes and waddled out into the dark. The spikes underneath the shoes gave remarkable grip, but in any case I had no fear of falling: with the amount of layers I was wearing, I wouldn’t feel it. The only challenge could be standing up again.

One behind another, half a dozen of us tromped down from the hotel to Lake Inari. In winter the ice is at least 40 cm thick, so you can safely drive a truck across it. The wind whips by, but there’s nothing to obscure your views of the sky.

Except, unfortunately, the clouds. There was no moon, no stars, and if the fire fox was dashing through the sky that night, he was doing so without an audience. Jukka tempered our thinly veiled disappointment by building  a campfire, handing out hot drinks and cookies, and starting to tell his stories.

He regaled us with tales of Finnish hunting trips, and spoke of the creatures of the forest, the birds and the bears, the reindeer and the wolverines.

The elusive aurora featured prominently in our fireside conversation. Jukka described it in the context of myths and legends. The lights were the sparks of the fire fox, of course, but also the colourful chariot of a goddess, the souls of stillborn babies, or the glow from Valkyries’ shields. He then moved on to the more widely accepted explanation, that it’s the result of electrically charged solar particles distorting Earth’s magnetic field. When the solar winds collide with particles in our atmosphere, they release photon energy in the form of light. Usually the light is green — our eyes detect this more readily than other colours — but the concentration of gases and altitude at which the particles collide can result in blues, yellows, pinks, and reds.

Another night, another opportunity to see the Northern Lights. The sky was clear, which boded well, and we decided to go further afield, to a point on the lake where there would be no light pollution from the hotel. It would have been possible to hike again, but the guide had something speedier in store: a six-man sleigh pulled behind a snowmobile.

We zipped across the ice, a small amount of snow thrown up either side of the runners. I had always thought that a sleigh ride would be awfully romantic — especially if I was wrapped up in furs — but the compulsory motorbike helmet and visor immediately put paid to such thoughts. Safety and warmth come first; glamour and romance are way down the list.

It started with a whisp. That whisp became an arch — the so-called gate of the Arctic — and then it began to swirl.

The journey lasted 20 minutes or so, and I was mightily glad of my snow suit. When we stopped, it was on the edge of one of Inari’s 3,000 islands, the kind of spot you might come for camping or fishing later on in the year.

I stood up, climbed out of the sleigh, and shook out my cold, stiff limbs, hoping the blood might at some point return to my fingers. I turned slowly, and there on the otherwise black horizon was a milky white streak.

It started with a whisp. That whisp became an arch — the so-called gate of the Arctic — and then it began to swirl. The movements were slow, almost choreographed, and completely entrancing. I stood transfixed, grinning from ear to ear.

In real life, the Northern Lights’ colours are far more muted than in photographs; in darkness, the camera’s sensor has much more dynamic range than our eyes do, and it has the added benefit of a long exposure. That in no way detracts from their mesmerising beauty, however, and if anything it encouraged me to stare up at the sky for longer and more intently.

I danced in the snow with happiness, and the fire fox up above danced with me. He arched and he swirled, he dove and he swooped, setting half the night sky alight with his ever graceful moves.

The Aurora Zone (theaurorazone.com) offers a three-night Northern Lights break from £1,495 per person, including return flights from the UK, full board at Wilderness Hotel Nangu, and all activities.