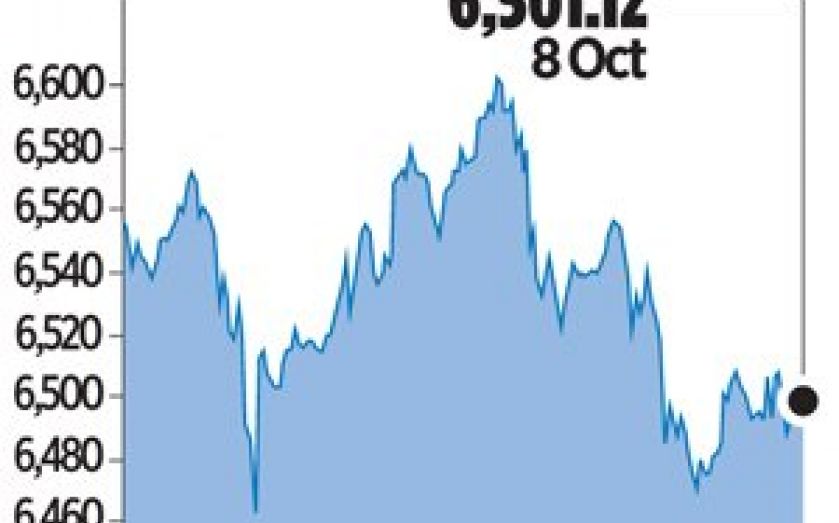 Shares in Tui Travel and budget airline easyJet fell 3.9 per cent and 0.8 per cent, respectively, extending the previous day’s falls prompted by a confirm­ed Ebola case in Madrid.

The first person diagnosed with Ebola in the US, meanwhile, died yesterday at a Dallas hospital.

Spirent Communications plunged 7.65 per cent to 71.20p in the wake of the telecoms testing company’s disappointing update published on Tuesday.

Engineering group GKN lost 3.50 per cent to 294.70p following a downgrade from Bank of America Merrill Lynch, which moved from “buy” to “underperform” and slashed its price target from 420p to 290p.

But Tesco recovered 1.37 per cent to 185.10p as analyst Dave McCarthy at HSBC raised his rating from “underweight” to “neut­ral” and his price target from 175p to 195p.

ITV added 0.68 per cent to 205.80p as Credit Suisse said it could return cash to shareholders, and highlighted that any potential bidder for the independent broad­caster would have to pay more than 346p a share. The bank put an “outperform” rating on ITV, with a target price of 270p.

Among the mid-caps, FirstGroup fell 4.87 per cent to 109.50p after it an­nounced the loss of the ScotRail franchise which derailed its inline trading statement.

Interserve, the building services and construction group, rose 3.83 per cent to 610.50p after Peel Hunt moved from “hold” to “buy”.

Platinum producer Lonmin added 1.58 per cent to 173.20p after saying it had returned to full production earlier than expected, following a five-month wage strike in South Africa which ended in June.

But London Mining, the debt-laden, west Africa-focused iron ore group, crashed by 75.81 per cent, ending at 0.75p, as it warned a proposed restructuring could potentially leave shareholders with nothing.