On the trail of world-renowned gorilla conservationist Dian Fossey, Damien Gabet meets with silverbacks in the Rwandan forest 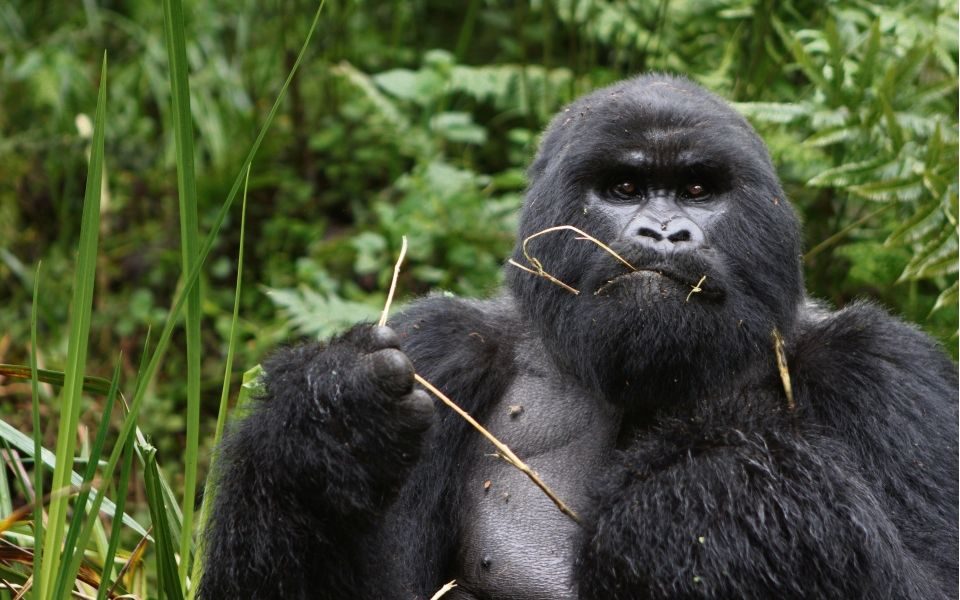 There he was, the man we’d trekked hours to meet. Frank was square-jaw handsome, but with a perma-frown and scar that made him look dangerous. Once a poacher, he now uses his tracking talents to locate mountain gorillas for tourists.

As we approached, I could see he was casually shaving earth from his boots with a machete. The other hand steadied a battered Kalashnikov, its gun-metal worn to silver from a thousand treks in the rainforest. When I tried to capture his portrait, he quickly shied away, so I winked to say sorry. Visibly softened, he then whispered the good news to our guide, Beck. His team had found the family we were looking for. They were feeding and in a good mood, so it was time to pay them a visit.

The Isabukuru family is one of 20 habituated (made comfortable around humans) groups in the country, and a vital number in around 900 mountain gorillas left in the world. ‘Isabukuru’ (‘anniversary’ in the local tongue) takes on new pertinence this year, as Rwanda and the primate protection community celebrates it being 50 years since the late Dian Fossey began her pioneering work in the country.

In 1967, the then anthropologist arrived in East Africa to explore unanswered questions in human evolution. But her attention and affections quickly changed, thus kick-starting what is now the longest-running gorilla study in the world. Hand-drawn maps and meticulous location plotting led to a census that revealed there were only 240 mountain gorillas left in the wider Virunga Massif (a forest that crosses the borders of neighbouring Uganda and the DRC).

The smell of nettles, mint, and other dewy greens felt closer now. Posh spa smell, I thought. Mother Nature's answer to Champneys. Plunging, calf-high, through purple volcano mud, I occasionally stopped to look up and around. It was the African red woods that inspired the most awe. They're beastly looking things, all dripping in moss, but then charming too as the source of delicate bird song.

However, it’s the morning mist that gives Rwanda’s glorious Volcanoes National Park its mythical quality. The best I saw of this was at 5am from my terrace at panorama palace Virunga Lodge. In front of me was a vast, farmed valley swooping skyward into a neat succession of tree-teeming, dead volcanoes. God’s own dry-ice machine filled the gaps with fog, adding eerie theatre to the view. On the other side of my mountain, distant hills gave way to an island studded lake, again layered in velvety vapour.

And then, if things didn’t quite feel surreal enough, there they were, casually strewn around a clearing at the top of whatever mountain we’d just climbed. The happy family, stuffing themselves with juicy shoots, scratching their backs, shaking bushes (to access the sweetest treats), and languidly rolling around to find the comfiest seats. As I sat on the ground, an inquisitive baby came over, breaking free of his mother’s cuddles, to show me how good a chest beater he was.

What an incredible rush. Imagine being a few unguarded metres from a 25-stone beast that could punch a hole clear through your chest if the mood took it. Primates, apparently, can’t smell fear like other animals: I had beads of liquid fright rolling from my pits, down each flank. They were utterly unfazed by us. Being half-cut on the alcohol of the fermenting bamboo must’ve helped, but even so, this was proof of habituation working rather well. Actually, the silverback (a dominant, massive male) in front of me looked borderline ambivalent – as if we were nothing more than a mild inconvenience. I’m sure I saw him roll his eyes when I took a seat next to him. Not this lot again.

What an incredible rush. Imagine being a few unguarded metres from a 25-stone beast that could punch a hole clear through your chest if the mood took it.

In his defence, when I looked around to appreciate his view, I saw a bunch of gawkers in hideous outerwear, fumbling with cameras. I reckon I'd be miffed if a line of sensibly shod voyeurs watched me trying to nap. Still, as differently as we all appeared, the gorillas exuded very human personality.

Dian Fossey must’ve been thinking the same thing when she met mountain gorillas for the first time. An emotionally opaque connection motivating her to dedicate (and then fatefully give up) her life to helping them thrive. Fossey was murdered in the forest and many will second that her killing was the result of nefarious financial motivations, an effort to return to poaching and the wholesale looting of their habitat’s natural resources. If there are no gorillas, there’s no reason not to get drilling, right?

But by the time Fossey died in 1987, she’d already done enough for primate conservation efforts to flourish. The story, this decade, is one of continuing success: while still ‘critically endangered’, the latest census is expected to show a healthy increase in numbers across the Massif. At one point, it was thought they’d be extinct by 2000.

The Dian Fossey Gorilla Fund (gorillafund.org) uses its $3m annual budget to employ 150 permanent staff at nearby Karisoke Research Centre. It takes that many people to look after nine gorilla families, and while numbers overall are on the up, the unhabituated gorillas in Virunga are declining. Extreme conservation clearly works. “Our resources mean we can react very quickly if there’s a problem,” said chief scientist Dr Tara Stoinski. “A juvenile went missing recently, but following a mass search, he was found caught in a snare. He would certainly have died without intervention.”

While I was out there, it was announced that the one-hour-for-one-person gorilla permit would be doubled to $1,500. Even locals, who could previously visit their furry neighbours for $50 dollars, are now obliged to pay the same preventative fee. But to Stoinski, fewer visitors is good news. Same money, smaller human impact (their greatest threat). She’s quick to highlight that in line with the price hike, the percentage of money going to local communities has also doubled (to 10 per cent).

The alternative view is one of fear for a still-young tourism industry. Those I met who rely on it were worried. Things aren't helped by the fact that you can see mountain gorillas in neighbouring Uganda for a third of the price (in the low season). The one comfort I can offer to late-comers is that by comparison, my trip last year to the Serengeti felt like a school trip to Dudley Zoo. The great apes and red woods of Volcanoes National Park conspire to beguile your senses. More palpably, though, a new direct Rwandair flight from Gatwick to Kigali now makes getting there a whole lot easier – and cheaper (from £372 return).

My comparatively low-cost hour was now up. I’d travelled into the deepest recesses of nature and didn’t want to leave. As far as is known, gorillas have a 16-sound vocabulary, and I was really getting the hang on the one that says, ‘I bow down to your superior strength and am very submissive’. It sounds like a husky donkey’s ‘ee-oooor’. Surely I could still turn it round with my new friend the not-bothered silverback – maybe convince him I was a nice guy who doesn’t always wear a cagoule. But then handsome Frank gave me a look that said, ‘let’s move’ and I hurried along ee-ooring my way back down the mountain.

This includes accommodation on a full board basis, return international flights, private airport transfers, gorilla permits, golden monkey permits and a selection of experiences in Kigali.