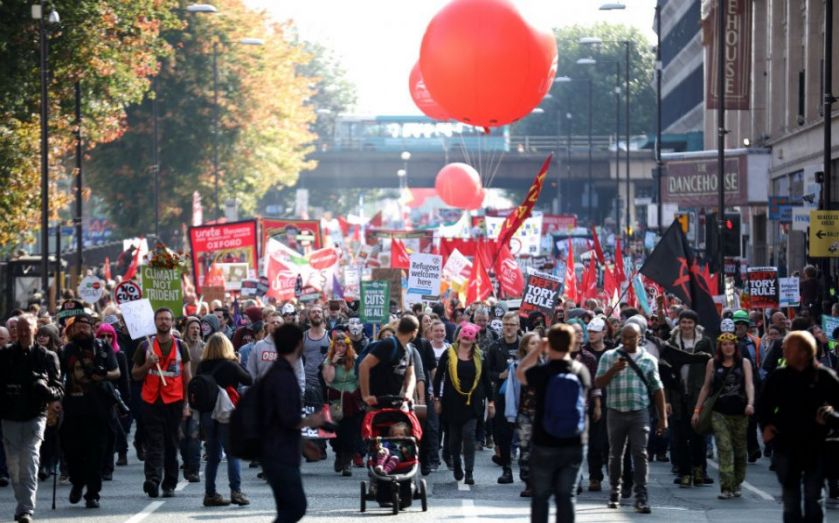 Tens of thousands of people have taken to the streets of Manchester in an anti-austerity protest on the first day of the Conservative party conference which kicks off today.

Around 80,000 people have joined the Take Back Manchester march through the city, according to local media reports and organisers.

Labour leader Jeremy Corbyn is also attendingthe march, organised by the TUV union and the People's Assembly, leaving at least one of his fellow Labour colleagues unhappy.

Shadow European minister Patrick McFadden accused Corbyn of turning Labour into a protest movement rather than a party of Government. Speaking to Sky News today, he said:

"There's a culture of protest in the Labour Party going back many decades and it has its place. But government is different from protest. What I want to see is a party that can get elected and implement change. There's a difference between being a party of protest and a party of government. One of the important things for him is to make that transition as a politician from one of protest to one, at least, potentially, of government.  They are not the same thing. What I don’t want to see is the Labour Party's job description being changed. We can't be satisfied with just being a protest movement because that would be a fundamental change in our job description. That’s not something I want to see."

NHS workers stand up for a strong NHS at the #No2Austerity rally pic.twitter.com/wJ7QGMRndL

Junior doctors at #No2Austerity march in Manchester at #CPC15 pic.twitter.com/hzaA0X4Lq4