Picture the likes of London’s White Cube, the Saatchi Gallery, and the Serpentine, all transported to, say…Hounslow. Would you be as inclined to head there of a weekend to take in the latest exhibition by Damien Hirst, or Tracey Emin? Serious collectors from around the world as well as art-loving Chinese investors are doing something very similar, flocking to the tiny, drab neighbourhood of Caochangdi, 20 minutes from the clamour of Beijing International Airport. Why? Because Caochangdi is one of the city’s most important art districts, home to a series of stark, spacious gallery spaces, filled with works by China’s foremost contemporary artists.

It was unofficially founded in 1999 by a certain Ai Weiwei, the country’s enfant terrible, whose name is synonymous over here with modern Chinese art. His provocative, political works include the Sunflower Seeds installation (shown at Tate Modern in 2010), a surveillance camera made of marble, and a 2,000 year old urn branded with the Coca Cola logo.

Caochangdi used to be a small farming village on the outskirts of the capital, but as Beijing expanded and a newly emerging middle class began collecting and investing in art, galleries have found cheaper rent and bigger locations in this suburb. If you’re looking to buy, or just browse, it’s a key stop on any Beijing itinerary.

China’s contemporary art scene has moved on since the infamous Green Lady portrait (that jade-hued Asian woman who graced the walls of many a ‘70s living room – even though it was actually painted by a Russian). The Chinese art market is now the third largest in the world, making up 19 percent of global sales, according to last year’s report by The European Fine Art Foundation, and Beijing is largely contributing to that. “The condition of the market here is currently very robust,” says independent Chinese art specialist Emily de Wolfe Pettit, founder of Peking Art Associates. “We have more artists here than in any other city in China.”

On a grey and smoggy afternoon (which you get used to if you’re here for longer than a couple of days), I investigate what Caochangdi has to offer. It’s a world away from the crowded historic sites tourists throng to in the centre. After walking through a local market, where people are haggling over fruit and vegetables, and stallholders are prepping trays of steamed dumplings, I stumble across what looks like a wasteland of abandoned warehouses – but is actually one of the nerve centres of Beijing’s art scene. The No.1 Red Compound is a series of sparse, modern, red-brick buildings, separated by narrow passageways, housing various functional-looking studios, all hidden behind scarlet doors. 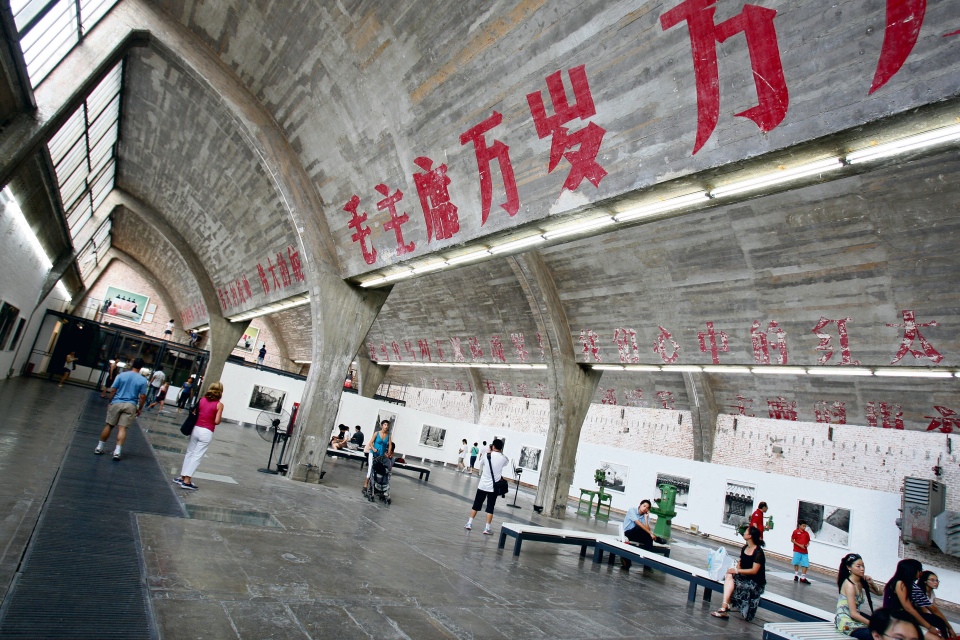 There’s Chambers Fine Art (which also has a branch in New York), displaying a rather vivid exhibition of hand-drawn, imaginary horror movie posters by 31-year-old Hong Kong native Ho Sintung. Nearby, the vast, echoing white-walled expanses of Taikang Space are showcasing Love Addict, a collection of sculptures, photography, and video installations by experimentalists Chen Xiaoyun and Jiang Zhi. My favourite is Synchrony, by digital artist Hu Jieming, at ShangART in the Artmia complex. The walls are hung with lightboxes featuring vintage photographs; each one has been digitally altered so that some part of it moves – a watch’s second hand ticks by, eyes move from side to side, a TV flickers… Who knows what it all means, but it’s the kind of thing collectors are going crazy for.

Artists are being recognised at a more immediate level, too; several have had their work sourced to hang in offices and hotels. Pettit herself was responsible for curating the art in the recently opened Rosewood Hotel where I stayed, working with the Beijing Central Academy of Fine Arts to find promising graduates as well as more recognised artists. A stylish enclave in the Central Business District, the hotel is brimming with quirky artworks, from the steel sculpture of a head in the five-storey-high lobby to the vivid, sexy and modern portraits around its restaurants and bars.

But if you don’t know where to start when it comes to fitting out your own pad, try seeking out younger, less-established artists first, whose work will likely increase in value. Ten minutes away from Caochangdi is Dashanzi, better known as the 798 Art District. A sprawling complex of Bauhaus-designed former electronics factories, originally built in the 1950s, they were abandoned in the ‘80s. Soon after that the creatives started to move in.

It’s a much livelier area, with more focus on the commercial aspects of art; there are smaller galleries galore, such as M Woods, Farschau, or UCCA, as well as shops, cafes, and working studios.

But how do you know what to invest in? The last word goes to Pettit.

“Buy something that makes your heart beat faster,” she advises. Whether that’s a painting of a woman with a green face, or something a little more audacious, you’re sure to find something here to your tastes.