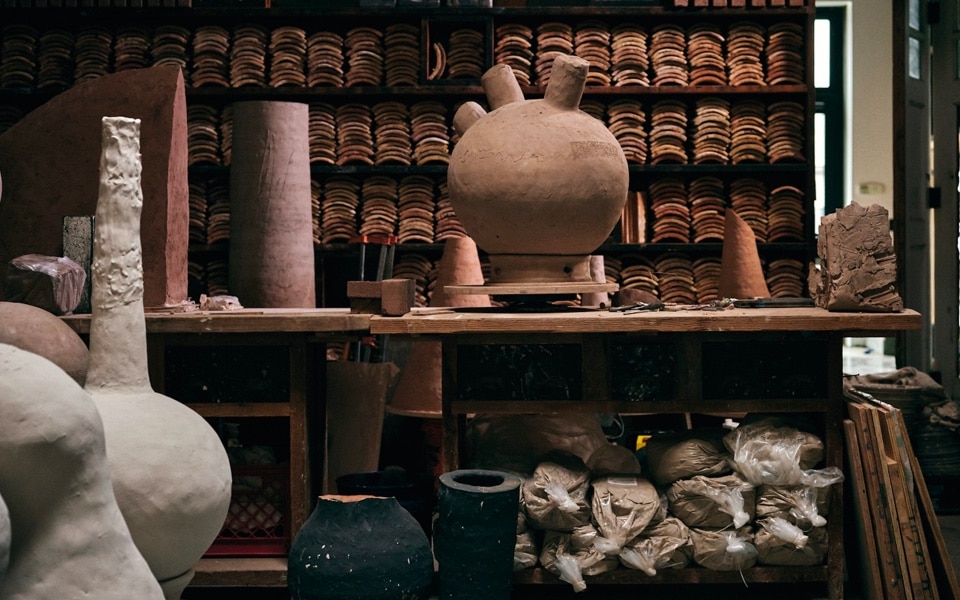 Fenchurch Street is currently a mess of diggers and drills, creating the perfect backdrop for a sculpture exhibition that begins with bricks. Chicago-based artist Theaster Gates explores the historical significance of clay and clay artefacts, using them as a way of understanding racial identity in an urban setting.

Sculpture, installation and film all feature in a show that charts two decades of Gates’ work, from hand-thrown pots to sculptures inspired by the Japanese tradition of mingei, the celebration of folk art. He combines this with his experience of the urban landscape in a pottery style he describes as “afro-mingei”.

The lower floor focuses on works that inspired Gates in his early years, with sculptures displayed alongside clay artefacts that document a history of colonialism and slavery. One of the featured pots is by former slave David Drake – AKA Dave the Potter – who created stoneware jugs in the mid-19th century; the inscribed piece sold at auction for $369,000 in 2020. The preservation of his name and work is testament to his creative expression, but also to the disparity between his existence without liberty, and the subsequent wealth his work has accrued.

Also Read:
The Royal Academy Summer Exhibition 2021 is the best in years

Elsewhere, pieces are a conflicting combination of the domestic and the industrial. The brick press from his studio and a rickshaw installation feature alongside a wooden cabinet with a glass front containing ceramic fragments from his studio.

As you climb the stairs the ideological thrust of the artwork changes. In a dark room Gates’ new film A Clay Sermon shows the sculptor in various stages of creation – making, destroying, and reforming clay. “In the beginning was clay,” says Gates, walking in a disused industrial space one moment, playing the trumpet in his studio the next.

There is something sombre about the film, in one moment he sings jazz with his vocal ensemble The Black Monks while moulding pottery on a wheel. His associations with clay are meditative, the artist finding signs of life, death and remembrance through each sculpture, his music and art interweaving.

It’s a fascinating way to assess the past and explore how it builds our understanding of the present.