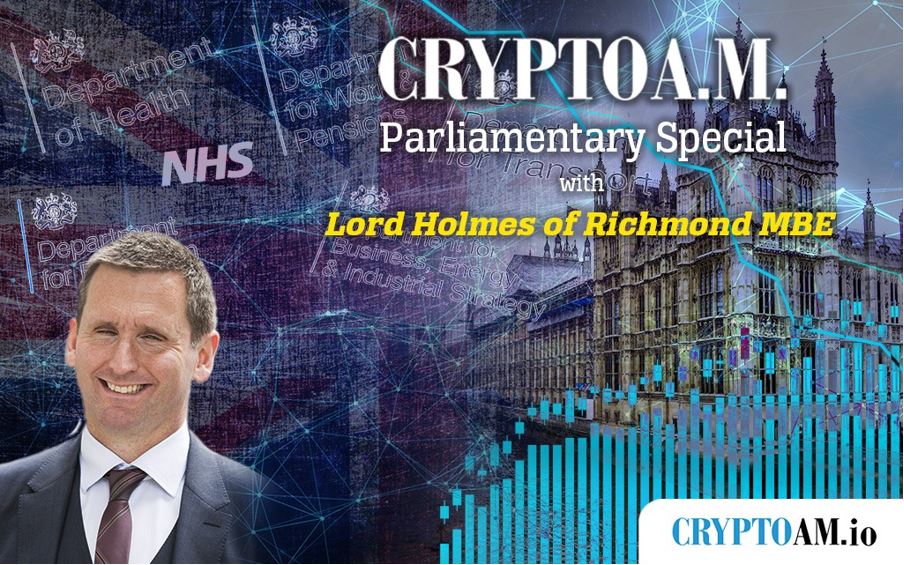 Crypto AM Parliamentary Special – part one of two

with Lord Holmes of Richmond MBE

After hundreds of hours of debate, thousands of words drafted and spoken, we have passed the Financial Services Bill through the House of Lords.

It now goes back to the Commons, for consideration of our amendments, before being finally agreed then off to the Palace for Royal Assent.

Learnings from the Bill, many. Work still to do, much.

From a crypto perspective, it seemed, as is often the case, many of my amendments relating to fintech – including, for example, consideration of blockchain-based tools for transaction reporting requirements under the Markets in Financial Instruments Directive (MiFID), a mandatory regime for open finance, action on Digital ID, AI officers –  appeared just too early for the Government’s taste.

Readers will know well, we need to get on with this, not at a frenzied pace but with focus, purpose and yes much (more) pace.

On Monday I pushed again the need for financial market infrastructure reform to enable, not least, the processing of digital instruments. The most pressing of these needs is to ensure that we de-materialise UK securities at least at the same rate as that in the EU.  In response the Minister set out how we were now out of the EU and didn’t need to be necessarily guided by any particular jurisdiction.  That is certainly true, although the EU is just across the way and when it comes to securities dematerialisation, as with so much, it is a race, it is a competition and it is one we can succeed at, or not.

Similarly, when it came to cryptocurrencies themselves we were told of the ongoing consultations, of which we are all aware. Consultations, if true in nature, are no bad thing but, again, we need action. The Government is cautious, as is the Central Bank, and this is not of itself bad but it must be contextualised in the same space as every other aspect of the financial services sector.

Yes, there are risks but these must be understood, considered and worked with and through as with any other element of, not just financial services but of, well, of everything. Go out your front door – risks, choose not, stay in doors – risks.  It’s an unfortunately risky business this life thing, better to choose action and face them.

This caution rang through loudly in Nikhil Rathis’s opening keynote to day two of UK Fintech Week yesterday.  He seemed almost skeptical when speaking of crypto, risks to the fore, huge losses already noted for certain investors. Again, it is right for our financial services regulator to take a view on crypto and to demonstrate commitment to one of the FCA’s key objectives, that of consumer protection.

But where were they when it came to so much of what has gone wrong recently? Not in crypto but in the boringly traditional financial services debacles, or what some might call disgraces?

As well as pushing fintech objectives in the Bill I have been championing several amendments that relate to improving financial inclusion and consumer protection for individuals and small businesses. Where is anyone when it comes to the consumer protection of those facing serious debt, through no fault of their own, such as the mortgage prisoners – the subject of another amendment to the Bill?

Rathi rightly stated that consumers should be subject to the same protection rules when online as not. This is, of course, true, but what of those in debt? So called lead generators, who hook in those on line seeking debt advice and make a mint in that pursuit, often at the further loss of those in debt face no financial services regulation. It would seem just good sense that they do, we were not able to persuade the Government of this in the Bill, the mission continues.

It was excellent to hear the Chancellor, on Monday, set out plans for the HM Treasury and Bank of England taskforce for a UK central bank digital currency [CBDC]. One of the many Kalifa recommendations I had pushed for in the Bill and I believe that it could be one of the most transformational steps we jointly take as a nation.

Combining the fine reputation of the Bank of England with the best of our new technologies, brains and industry could stop nowhere short of a complete reset of the relationship between citizen and State, for the benefit of both.

As with financial markets, products and promotions themselves, so it was with the Financial Services Bill, we had wins and points still to fight. The Bill provided space, opportunities to set out so many immediate possibilities for the UK to lead and succeed, space to set out new solutions to old, persistent problems. Of the success, of the wins and of what more we need to continue to push on. More here tomorrow.

Further detail about amendments to the Financial Services Bill can be found on Chris’s Blog: https://lordchrisholmes.com/