Bitcoin fell to $34,000 over the weekend as its correlation to the US stock market became even tighter.

The rapidly-changing Federal Reserve policy in response to rising inflation has caused extreme fear in both legacy and crypto markets.

As a result, Bitcoin has reached its lowest level on the daily RSI (Relative Strength Indicator) technical indicator since March 2020, which was the time of the so-called ‘Covid crash’. The weekly RSI currently sits at 37, which is usually considered as indicating the price is oversold.

However, despite fairly widespread gloom among many traders, some analysts are suggesting the market is presenting investment opportunities.

One such expert is Marcus Sotiriou, analyst at the UK-based digital asset broker GlobalBlock, who says every bear market bottom for Bitcoin has ranged between 29-35 on the weekly RSI, suggesting that the risk/reward is advantageous for buying in this area if an investor believes in the long-term value of the asset class.

The MVRV ratio (market value divided by realised value) is an indicator that many analysts are studying. It is currently at 1.50, indicating that Bitcoin wallets still have 50% unrealised profits. Historically, bear markets have bottomed when the ratio reaches below 1, which has provided generational buying opportunities. 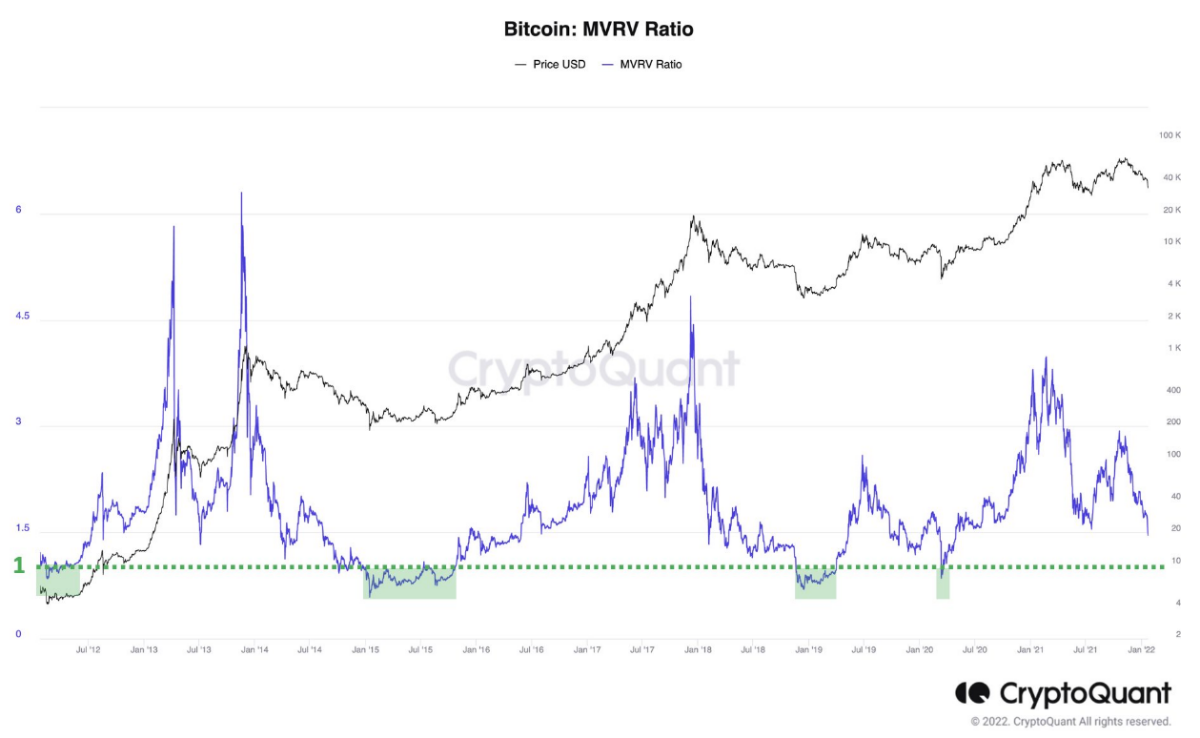 “Hence why this is another great indicator to watch out for over the coming weeks/months in the case of more downside,” says Sotiriou.

“However, I think the determination of a bull/bear market is not as clear as previous cycles, due to the structure of the market changing drastically with institutions entering the space. Now, it is apparent that Bitcoin is in a ranging environment (between $29,000 to $69,000 approximately) rather than a trending environment (like we saw for the first half of 2021, where the whole crypto market was in a consistent uptrend).

“We are near the low end of the range in the low $30k region, which indicates that this the risk/reward here is advantageous to buy, in confluence with the RSI mentioned above.”

The GlobalBlock analyst also pointed to El Salvador – the first country to adopt Bitcoin as legal tender – where the nation’s flamboyant president, Nayib Bukele, is leading the vanguard of international Bitcoin adoption. He sees the interest from other countries as a bullish signal.

“Over just a few months, El Salvador has onboarded four million users for its government-backed Bitcoin wallet, which is over 60% of its population, whilst only 30% have bank accounts!

“I think El Salvador’s impressive adoption rate will help entice other countries to follow them in making Bitcoin legal tender this year, despite the volatile price action we are currently experiencing.”