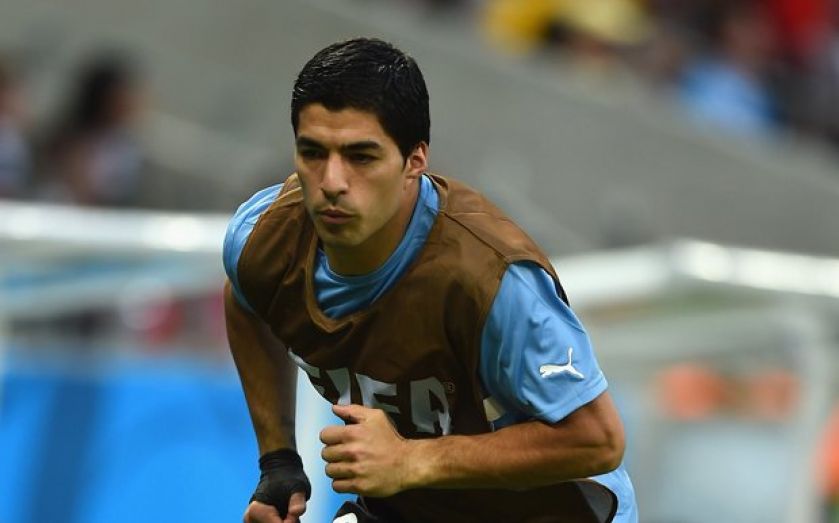 WITH Uruguay striker Luis Suarez having declared himself fit for Thursday’s win or bust clash with England, his Liverpool strike partner is relishing their head-to-head but has warned the two-time World Cup winners are by no means a one-man team.

Suarez played no part in his country’s surprise defeat to Costa Rica due to recent knee surgery, but the man who hit 31 Premier League goals said yesterday: “I’m 100 per cent fit”.

The severity of Suarez’s problem up until now has been unclear and Sturridge revealed his club-mate had been keeping his cards close to his chest, but is looking forward to lining up against him, believing England have the quality to win regardless.

“We need to negate Uruguay, it’s not just about Suarez. Same for them against us, it’s a team game, not about individuals,” he said.

“I’m not on texting terms with Luis. I don’t think Steven Gerrard, Jordan Henderson, Raheem Sterling or Glen Johnson are either. I don’t think Luis has asked me for clues and I haven’t asked him. It’s a game of football, he’s trying to help his country and I am mine, I wish him well.

“I never wish injuries on anybody. I hope he’s fit. We want to face the best Uruguay possible to show regardless of what team they play and what team we play we want to show it is about a team going out there to do the job. Whether they have Luis or not we’re going to play the same way.”

Arsenal midfielder Alex Oxlade-Chamberlain missed Saturday’s narrow defeat to Italy with a knee ligament strain, but yesterday was fit enough to train alongside his team-mates for the first time since suffering the injury in a pre-tournament friendly against Ecuador on 4 June.

Should he prove fit enough to return against Uruguay it would pose a conundrum for boss Roy Hodgson, who could be reluctant to change a team that drew many plaudits for their performance against Italy.

But Danny Welbeck believes any changes should not come at the expense of misfiring Manchester United team-mate Wayne Rooney.

“First and foremost, Wayne Rooney is a class player and wherever he is playing on the pitch he can make a massive impact,” said Welbeck.

“Obviously Wayne was on the left in the first game and in the second or third game he could be in a different position. All the forward players have the flexibility to move in and round, interchange positions.

“Waz is the all-time top scorer for England currently playing, he has got 93 caps and he is very experienced. When he is on the pitch, he can make a difference.”