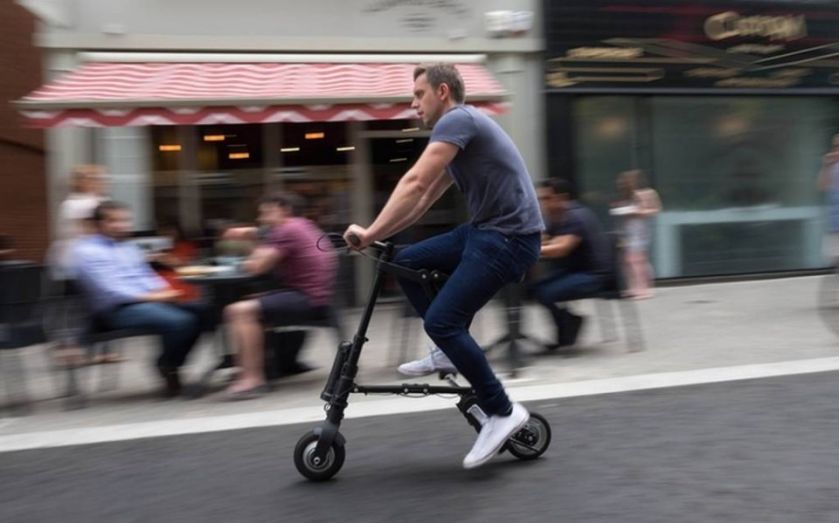 Fresh from his victorious fundraising for an updated ZX Spectrum, Sir Clive Sinclair has a new invention seeking crowdfunding – the world's lightest and most compact electric bike.
The A-Bike Electric – an upgrade of the original which launched nearly a decade ago – is about to launch on Kickstarter, where Sinclair's team is hoping to secure £40,000 to get the prototype into production.
The bike uses a brushless motor and quick charge 24V battery, which will power the electric element of the bike for up to 25km (16 miles) – although the rider can of course cycle without turning the power on.
Aimed at commuters, it's very lightweight – just 12kg (26lbs) – making it suitable for commuters to carry if they are taking a train, tube or bus at points in the journey.

So light, you can run around holding it (Source: A-Bike Electric)

Sinclair said: “We envisage A-Bike as the ideal solution for travelling at both ends of a commuter journey. A typical commuter needs to get from home to local station and thereafter from destination to office or workplace – without anxiety of portability, parking and security”
As well as simply donating to the cause a limited number of initial backers could buy the A-Bike Electric for £449; the standard price is £589.
Given the success of the ZX Spectrum Vega, it looks likely that Sinclair and team will reach their £40k target.
Whether it goes down with the cycling community better than the original A-Bike remains to be seen.