Boots recently announced a partnership with Deliveroo that would see the health & beauty retailer’s products made available for delivery in 14 cities – including London, Birmingham, and Edinburgh. Data from YouGov BrandIndex shows that it looks like a savvy move for both brands.

YouGov data reveals that if you’re someone who shops with Boots, you’re more likely than the average consumer to have used Deliveroo in the past 30 days. Among the general public, Deliveroo’s Current Customer score – which measures whether someone has used the delivery app in the past 30 days – sits at 6.6 per cent; among Boots customers this figure is higher – at 9.4 per cent. 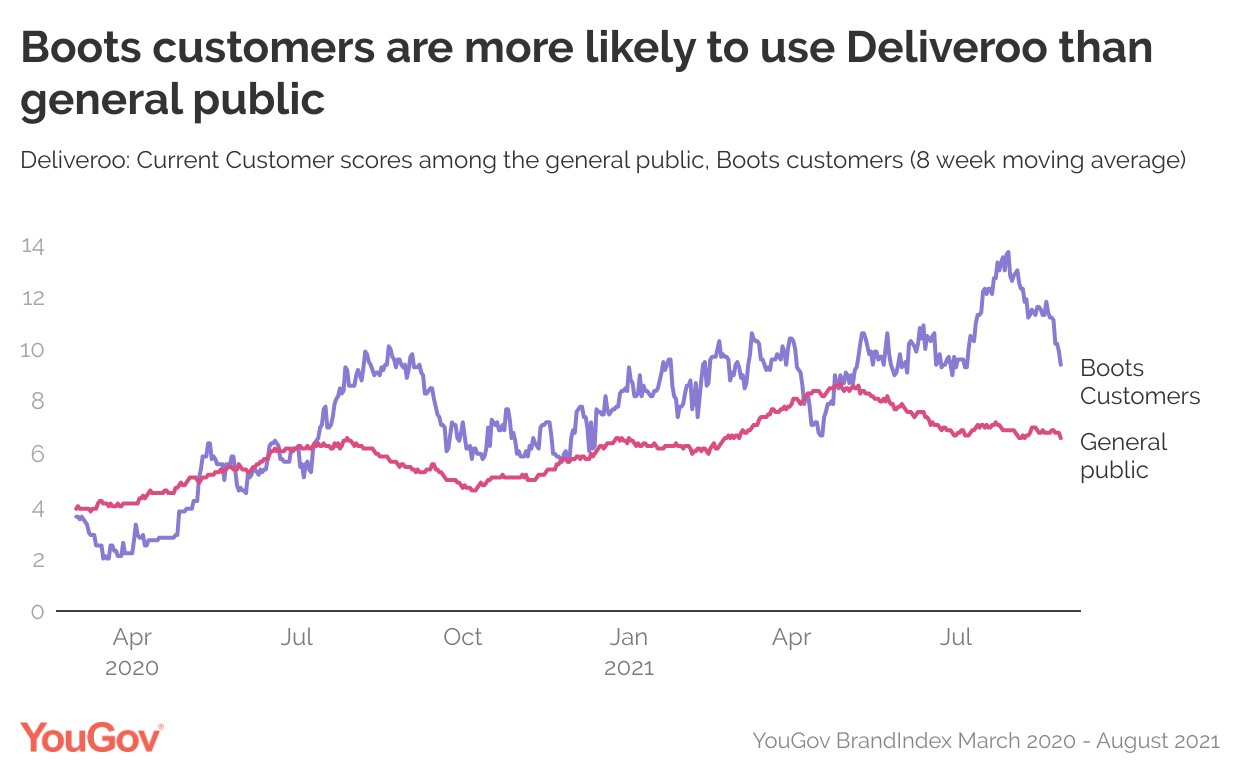 It’s the same story when it comes to Deliveroo’s Consideration scores – which measure whether people are likely to buy a brand the next time they’re in the market. Boots customers (14.0) are more likely than the public at large (10.1) to think about using the delivery service. Similarly, Deliveroo’s Purchase Intent score – which measures which brands Britons would be most likely to purchase – is higher among Boots shoppers (14.0) than the average consumer (2.7).

Even better for both brands, Boots customers are more likely to be contented users of the delivery app. While Deliveroo’s Satisfaction score – which measure whether customers are happy or unhappy with a particular brand – among the general public is 6.7, it rises to 13.3 among people who shop at Boots.

This group is also more likely to advocate for the service among friends and family: while Recommendation scores are 1.2 among the wider British public, they’re significantly higher among people who shop at the retailer (6.1). Boots might help Deliveroo drive sales – but it could also help the brand drive positive word of mouth.

Overall, the data shows that Deliveroo and Boots are set to benefit from this partnership. Existing Boots customers are more likely to be users of the app, which could make ordering beauty products or over-the-counter medicines for home delivery an straightforward sell. These Britons are also more likely to have positive perceptions of the brand across other relevant metrics. While it is a limited rollout, the Deliveroo-using public may well fill their Boots.