Attention follows Eric Cantona like a seagull following the proverbial trawler – so it’s no surprise that Sports Direct chose him to front their latest campaign. Taking centre stage in a Euro 2020 ad for the beleaguered retailer, the maverick actor, footballer, and sometime kung-fu fighter highlights the emotional, unifying appeal of the beautiful game.

Data from YouGov BrandIndex shows that, between the campaign’s launch on May 29 and June 17,  Ad Awareness – a measure of whether a consumer has seen an ad for a brand or not –  rose from 4.3 to 7.0 (+2.7), while Word of Mouth, which measures whether people have spoken about a brand with their friends and family in the past two weeks, performed slightly better, rising from 4.3 to 7.9 (+3.6).

Eric the Red’s appearance has also coincided with an uptick in the brand’s Value for Money scores, which increased from 8.7 to 12.3 (+3.6) over the same period, while Consideration enjoyed a slight bump, increasing from 21.5 to 23.8 (+2.3). Cantona and Euro 2020 may have made people generally more pleased with the brand than they were before: Satisfaction scores, which measure whether a consumer is happy or unhappy with a particular brand, rose from 11.6 to 16.8 (+5.2). 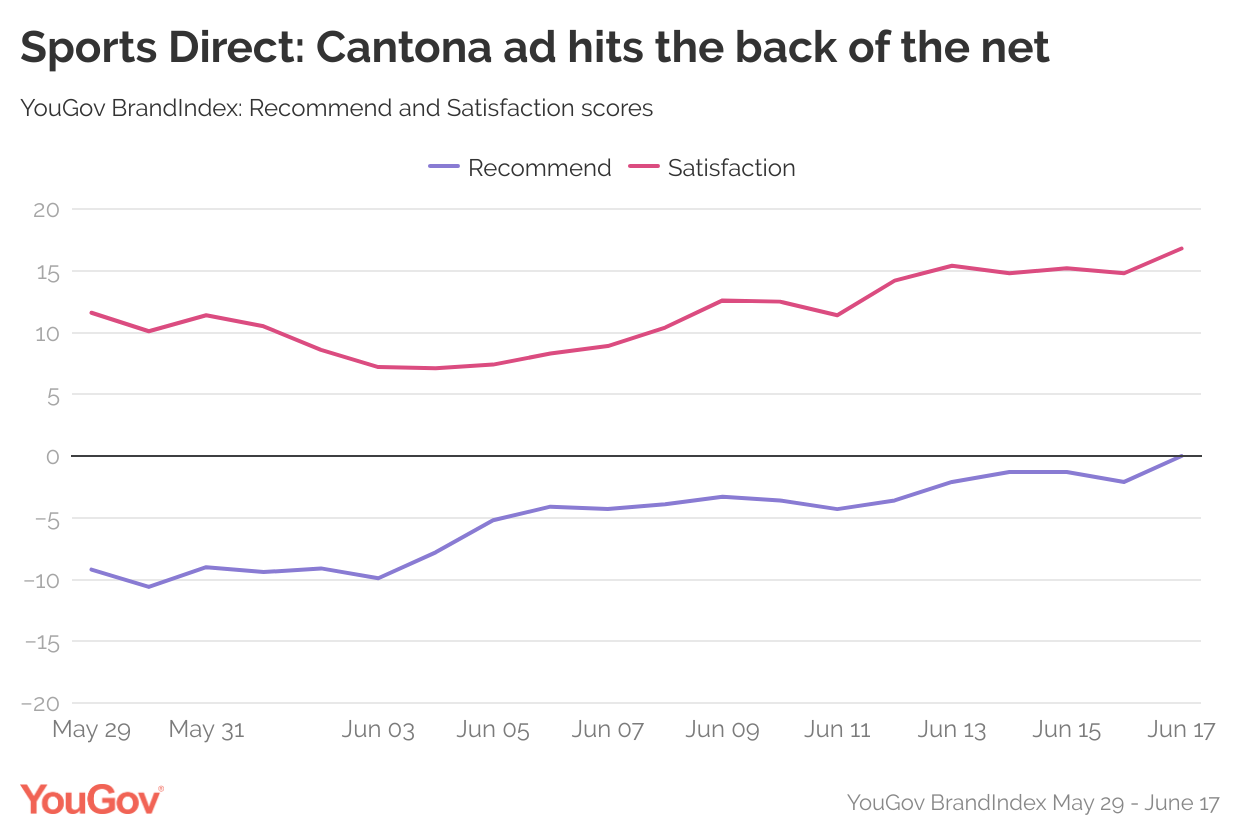 Beyond improving the retailer’s general fortunes, the ex-Man United star has helped make perceptions of Sports Direct less negative in some key areas. When it comes to Impression scores, for example, the brand has gone from worse to bad with an improvement of 7.5 points: rising from -15.5 to -8.0. Sports Direct has seen an even better showing with its Recommendation scores: where people were solidly negative about the brand on the day the campaign launched, with scores at -9.2, they increased to the point of perfect neutrality (0).

Cantona is a polarising character: one who has historically seemed indifferent to the beautiful game, and who has a strong association with one of England’s major sporting rivals. He’s also a figure who has  appeared in a number of ads, and not always to similar effect. Sports Direct, however, put Cantona’s unique persona front and centre – and, as he did so often in the 1990s, he scored.