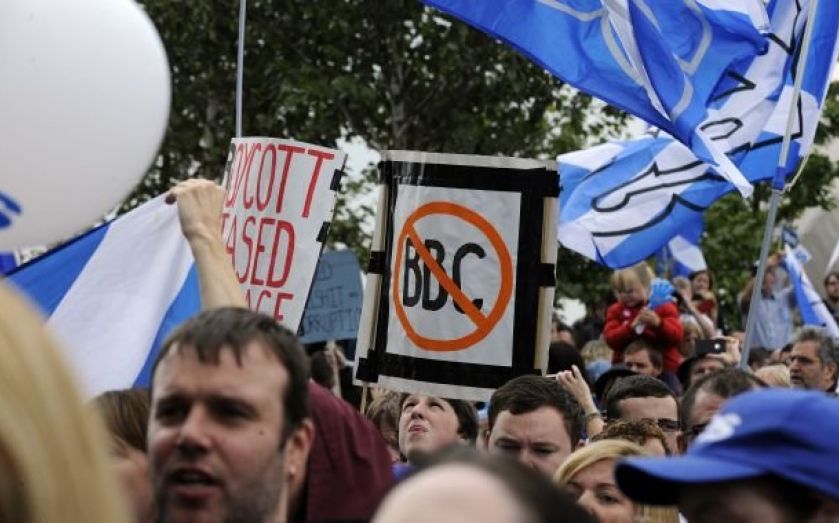 At least 1,000 people have protested outside the BBC’s Glasgow HQ against the broadcaster’s perceived bias in the Scottish independence referendum.
Pro-independence supporters, many of whom were waving the flag of Scotland and holding anti-BBC placards, gathered outside the BBC Scotland building in the Pacific Quay area at around 2pm this afternoon.
The BBC describes a “large crowd” of around 1,000 people outside the building, however STV suggest that the figure is closer to 2,000.
Today’s protests were in part sparked by a report from which Nick Robinson last week, in which the BBC News political editor claimed Scotland’s First Minister Alex Salmond had avoided answering his question, a line which some felt was misleading.
A large banner at the protest read “Sack Nick ‘The Liar’ Robinson, a totally corrupt journalist, these days typical of the British Biased Corporation.”

Anti-BBC campaigners also took to social media to display their displeasure at the reporting, with around 6000 tweets containing both the #bbcbias and #indyref hashtag already appearing on Twitter today.
Over 15,000 tweets with the hashtag #bbcbias have been posted today, however not all of these will be in relation to the referendum.

An online petition calling for an independent enquiry into BBC bias on the independence referendum has over 70,000 signatures.
A separate petition on change.org calls for the immediate suspension of Nick Robinson from the BBC has been signed by over 15,000 people. It claims that the journalist has been caught “blatantly lying to the public, breaching the BBC Charter and presenting a false picture of the Scottish Referendum”.
When asked by the Sunday Herald if he thought the BBC was guilty of bias, Scotland's First Minister Alex Salmond replied “absolutely”.
Salmond said:

The problem with Nick…I mean, don’t get me wrong, I like these folk, but they don’t realise they’re biased. It’s the unconscious bias which is the most extraordinary thing of all.
If the BBC were covering, in my estimation, any referendum, in any democracy, anywhere in the world, they would cover it impeccably, in a balanced fashion. What they don’t understand is they’re players in this.

The BBC has refuted the criticism of Robinson’s in a statement published to their website:
The BBC's Political Editor Nick Robinson asked Scotland's First Minister Alex Salmond two questions at his press conference on Thursday 11th September. The first question centred on the tax implications of RBS moving its legal headquarters to London; the second on why voters should trust a politician rather than businessmen.
Nick Robinson's report showed the second question on trust, with a script line noting that Mr Salmond had not answered that point.
Mr Salmond's answer on tax was lengthy. Since it was not possible to use it in full in a short news report, a series of clips were included making his central points – the job implications of the re-location of RBS, the accusation that the Treasury broke rules by briefing market sensitive information and his request that the BBC should co-operate with an enquiry. In addition Nick Robinson's script pointed out that the First Minister said there would be no loss of tax revenue.
The BBC considers that the questions were valid and the overall report balanced and impartial, in line with our editorial guidelines.
Share
Tags: BBC