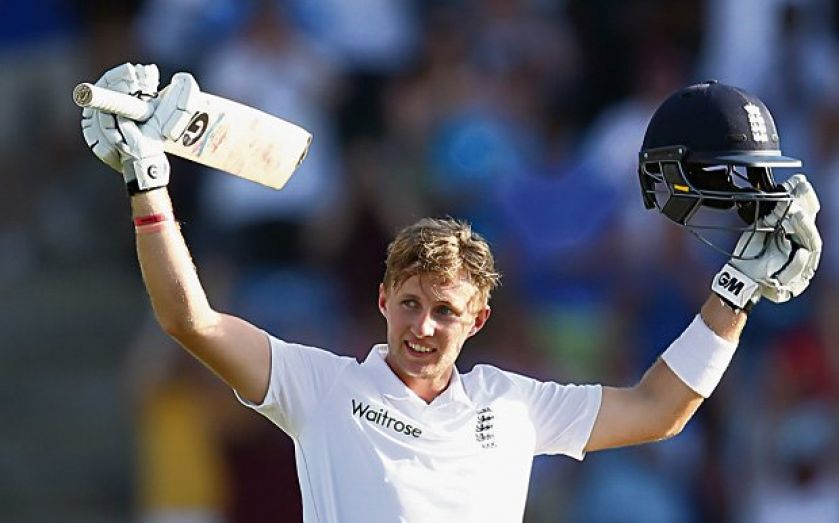 ENGLAND batsman Joe Root cruised to his sixth Test century as the tourists produced a resilient batting performance on day three of the second Test against the West Indies in Grenada.

Root will resume today on 118 not out, while his first overseas Test hundred, brought up in just 125 balls, helped England finish on 373-6 at the close, establishing a lead of 74 over their hosts.

The 24-year-old has now passed 50 in each of his last six innings, scoring more than a thousand runs at an average of 103.7 since being dropped for England’s final Test in Sydney during the 2013/14 Ashes series.

England manoeuvred themselves into a position of strength in the afternoon and evening sessions and will look to intensify the scoreboard pressure on the West Indies on an increasingly unresponsive surface, but were blighted by a flurry of late wickets, as Moeen Ali and Ben Stokes fell cheaply.

Skipper Alastair Cook, meanwhile, failed to remove the Test-century burden weighing heavily on his shoulders, amassing 76 before chopping on while attempting to cut Shannon Gabriel.

Under-pressure opener Cook has now amassed four scores of 50-plus in seven knocks, although his seemingly incessant wait for a first century since May 2013, when he reached three figures against New Zealand at Headingley, continues.

The 30-year-old has now gone 34 innings without a Test hundred, the second most for an England opener behind former captain Mike Brearley, who clocked up 41. Cook has also failed to convert 10 half-centuries since his last ton.

The South African-born batsman spent 18 months away from the international scene after the emergence of a stress-related illness during the Ashes series, and has been battling to justify his selection.

Trott and Cook shared a first-wicket stand of 125 before the former edged recalled leg-spinner Devendra Bishoo to Jermaine Blackwood at gully for 59, his first half century since August 2013.

It was also the first time since March 2013 and a clash against New Zealand in Dunedin that England’s openers had reached three figures without being breached. In that game Cook and forgotten man Nick Compton put on 231.

Gary Ballance, a centurion in the first Test, was motoring towards another three-figure milestone before being snared by the innocuous slow bowling of Marlon Samuels for 77. He and Root had added 165 for the fourth wicket.

Stokes was the final wicket of the day to fall, pulling a long hop from Bishoo to Blackwood on the leg-side boundary, while his running battle with Samuels continued as the West Indian silently saluted the all-rounder as he passed on his return to the pavilion.