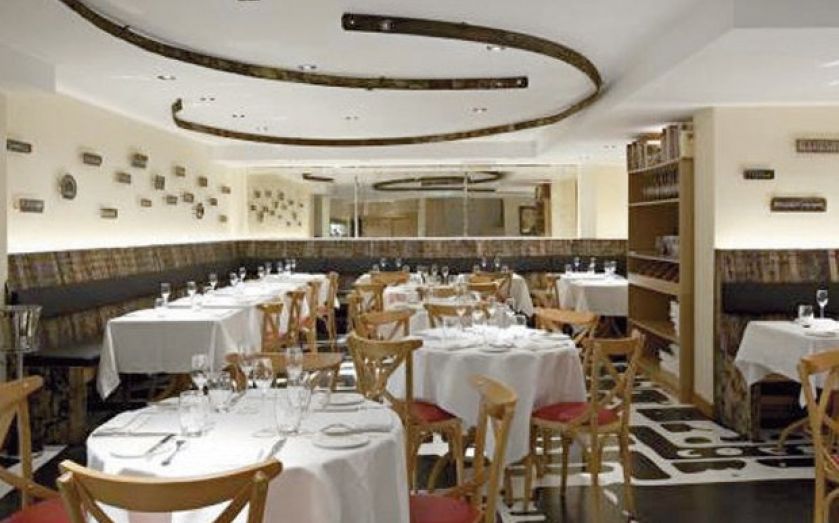 FOOD Four Stars VALUE Three Stars ATMOSPHERE Four Stars Cost for two with matched wine and some sherry £148 Address: 21 St Swithins Lane, EC4N 8AD Tel: 020 7626 2606If you were taking a partner out for an important occasion – an anniversary, maybe, or the death of a loved one – would you choose somewhere in the City? If the answer is yes, I give your relationship a year. You don’t deserve them. Get counselling.Because, honestly, the Square Mile is hardly spoiled for restaurants. If you were to go to a different one every day, you’d run out of decent places before the weekend. Sweetings is good if you can stomach the queue, and the 1776 dining room around the back of One Lombard Street is OK. Between Hawksmoor and Goodman you’re covered for steak and the One New Change restaurants are mostly fine but not exactly worth writing home about (or even sending an email for that matter). After that I’m struggling: the very mention of Coq d’Argent fills me with a culinary ennui and when a colleague recently visited that City stalwart The Mercer, they advised her: “The pigeon’s not very good today, perhaps you’d prefer something else…”, which kind of says it all.Given the prestige and wealth sloshing around the Square Mile, it seems absurd that you have to take the Central line four stops to find more than half a dozen places worth eating.The City also has the Don, which is such a part of its furniture that I forgot it was there at all. I used to go all the time in a former life as a business reporter, back in the days when I was flattered that people in the PR industry wanted to take me for lunch (the folly of youth). Was the food any good? I can’t remember; my memory of those afternoons comprises of laminated results presentations for FTSE 250 companies, not the quality of the lamb.Now the Don has opened a less formal bistro – also down St Swithins lane, a wonderfully evocative name for a street, somewhere a benevolent Tolkien character might live – called The Sign of the Don (the team is also responsible for Bleeding Heart). It’s not just an extension, either; it’s gigantic. There’s a decent-sized bar on the ground floor and a warren of tunnels and antechambers below, including several low, arched dining rooms and a wine cellar that used to be a secret passage to the Thames. You can imagine Harry Potter eating here, after he’d given up the wizarding and got a proper job auditing for PwC. There’s an emphasis on the quality of the booze (which I can vouch for – we were pleasantly sozzled by the end), reflected in the barrel stencils on the walls and the reclaimed cask-wood seating.Where the Don’s menu leans towards France, The Sign pays homage to Spain, although there’s an unmistakably City-ish meatiness to it, too. I started with egg and mushrooms on toast, which is a brilliantly regressive way to begin a meal, taking me back to a time before I became a massive food snob. And, honestly, there are few more satisfying sights than a piece of charred bread creaking under the weight of yolk and fungus.I ordered the duck for my main, largely because I couldn’t even begin to visualise what it was from the waiter’s description. It turned out to be a menagerie of woodland creatures; a whole duck stuffed with pork and venison mince, with some pistachios and chestnuts thrown in. It’s served with cabbage and mushrooms, and an apple and pear puree, and there’s bread sauce in there somewhere, too. And croutons, I think. It’s a lot to remember, let alone to craft into a workable dish; a new flavour pecks or snuffles or flaps at you with every forkful. But it worked – it’s heavy, hearty comfort food; country pub fair that makes you feel wholesome and bucolic.My guest’s whole baby chicken was simpler, served with unfussy greens and a tasty vinaigrette. The delicate meat did the heavy lifting, although the skin should have been crisper.I finished with an apple and blackberry crumble; getting this right should be a formality but so many restaurants still muck it up. Not tonight – it was just the right balance of sweet and tart, although it got few marks for presentation. The pastry chef was clearly preoccupied with the sherry-marinated figs and mascarpone, which were served with the flourish of two wafer legs poking into the air like the iconic flapper in a martini glass. I feel like I should say it was an unnecessary and slightly misogynistic pretension, but really, we were quite impressed. The figs had a wicked kick and the mascarpone was thick and taut and delicious.The Sign of the Don isn’t subtle – you won’t find dainty plates or truffle foam here. It’s a place to go for big flavours and a lunch that will fill you up until next week. In that respect, it’s exactly the restaurant the City doesn’t need; another meat-heavy kitchen where you can load up on fine wine and cholesterol. It’s head and shoulders above most places in the area, though, and that’s what the Square Mile is really crying out for.