There’s nothing that Londoners love more than hating the Tube – and their local Tube station, in particular.

But thanks to new research by web conferencing firm Powwownow we can officially name and shame the very worst of the worst.

Powwownow crossed Transport for London (TfL) 2017-18 data on how busy stations were, as well as how delayed trains were arriving at their platforms, with social media complaints to figure out which, statistically-speaking, were the most stressful.

It will surprise very few commuters that Kings Cross St. Pancras claimed the top spot, which earned a score of 1.8 out of three (higher is worse).

In addition to being London’s busiest station, with almost 98m people rushing through it over the course of the year, it was also one of the worst in terms of delays, clocking in 1,853 minutes.

Second up was Bank & Monument, where the gruesome interchange between the Northern and Central lines meant it was the most complained about station in London. Angry commuters complained about the station almost 400 times on social media over the course of reports, more than twice the number of any other station.

Stratford, another major interchange, had the third most delays, making the top three on the overall list.

Here are London's 15 most stressful stations:

The data offers some interesting insights into what makes certain Tube stations so stressful.

It’s not necessarily the busiest stations that are most stressful. Waterloo was the second-busiest station after Kings Cross St. Pancras, with 91m entries and exits, but it was ranked fourth behind two other stations – Bank & Monument and Stratford – which welcomed almost 30m fewer people. 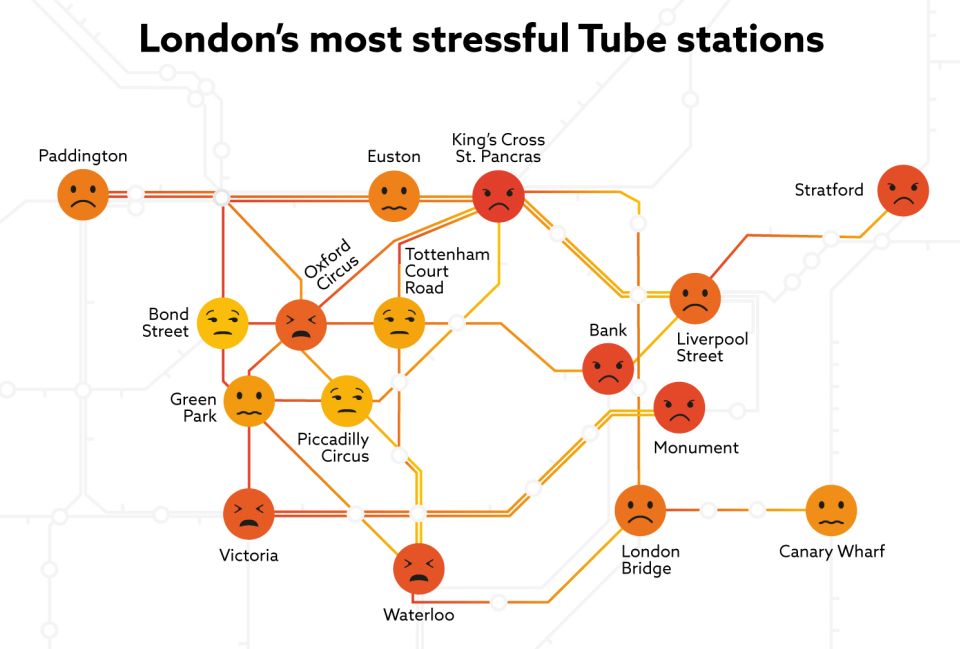 Acton Town in zone three was the most delayed station, clocking up 4,432 minutes of unnecessary waiting time. Arnos Grove in north London came in at number two, with 3,843 minutes. But neither station registered anywhere near the top of the overall most stressful list.

So what makes one Tube station more stressful than another? Jason Downes, managing director of Powwownow, said: “Many of the most stressful stations are located in central London and all of them serve a variety of lines. Unfortunately, although not unsurprisingly, the top 15 stations that are worst for stress are also popular areas for business.”

The data also looked into the least stressful stations and, unsurprisingly, most are on the outside of central London. So if you want a less stressful commute, the results show you might be best moving next to a Tube station further out. Otherwise, it's sweaty armpits for the foreseeable future.