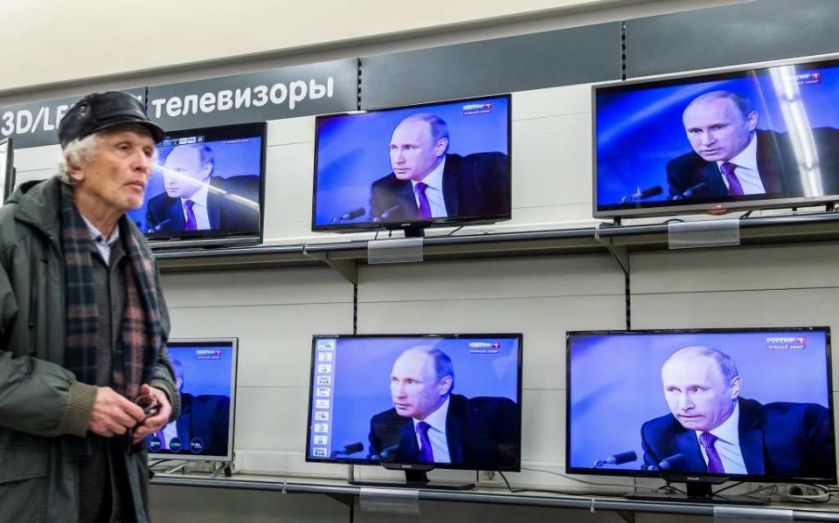 Buoyed, presumably, by the triumph of being named Russia’s man of the year for the 15th year in a row just hours ago, this morning Vladimir Putin climbed on to the podium to give a press conference to 1,300-odd journalists in what has become known as his answer to a “state of the nation address”.
Like last year, the conference lasted more than four hours. It was good to know that, considering the gravity of the political and financial climates in the country, local journalists were preparing to scrutinise him thoroughly:
https://twitter.com/maxseddon/status/545502521922682880
(Pelmeni, just FYI, is a Siberian dish consisting of dumplings wrapped in thin, unleavened dough).
But even Putin – who for some Russians has been a heroic figure – could not ignore the fact that, despite a slight rally yesterday, two days ago the rouble fell 11 per cent, its steepest intraday drop since the Russian financial crisis of 1998.
He admitted an economic slump will follow – but added that "under the most unfavourable circumstances it will last two years”. “I believe growth is imminent,” he said.
But to those who wanted to see more action from the central bank, he said "burning" through its $419bn (£268bn) reserves would be a bad idea.

This situation has been provoked by external factors. Foreign economic factors are influencing [the currency]. First of all the oil price and followed by the gas price. I believe the central bank and government is taking adequate measures.
There are questions for the central bank and government [over] whether the measures were timely enough, but on the whole they were correct.

Although he didn't mention (indeed, he largely ducked questions about) Ukraine and the cost of annexing Crimea, he did admit western sanctions were responsible for "25-30 per cent" of Russia's woes.
Putin also outlined plans to diversify the economy away from its reliance on oil, saying it “would not survive otherwise”.
That’s probably an understatement: although retail sales growth accelerated unexpectedly to their fastest in six months during November, the rise was largely due to consumers stockpiling goods in anticipation of further price rises.
Retailers are less than encouraged about their prospects in the long-term, though: having jacked up the price of an iPhone 6 by a quarter to just under 40,000 roubles ($633) to account for currency fluctuations a few weeks ago, yesterday Apple stopped selling its products in Russia altogether.
Meanwhile, anecdotal evidence suggests that people are lining up to rid themselves of their roubles.
https://twitter.com/RobbieGramer/status/545325671481114624
Putin did, to be fair, clinch that man of the year win with 68 per cent of the vote – but there are signs his superhero image is beginning to fade. Falling consumer confidence suggests waning certainty in Putin’s abilities to keep control of the rouble. That he remained composed during today’s conference was significant.