For some people, making a house a home is fun, but for others it’s a chore. Especially – as is the case in many of central London’s most desirable postcodes – if it’s not even your main residence.

If you don’t have time for a fixer upper, simply buy an interior designer’s flat. As luck would have it, this one owned by designer Elspeth Lynn is on sale in Westbourne Terrace, Bayswater. And it’s not for the wallflowers.

The result is a Grade II Listed apartment that’s packed with period features, yet you can move in after completion and not have to lift a finger. Lynn took 10 months to renovate the 1,528sqft, two bedroom apartment. “When I first walked in, I could see that the apartment had so much potential and I believe if you listen and look carefully, spaces let you know what needs to be done to them,” she says. Clearly this flat was squarking like a magpie because it’s filled with shiny surfaces, from Clement London iron and glass doors to the gold wallpaper in the entrance hall. 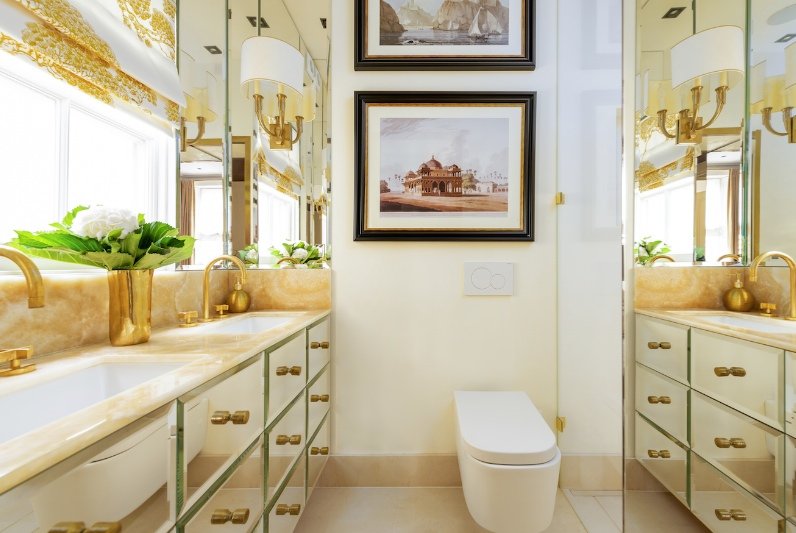 A bathroom in gold and honey oynx

Lynn also commissioned some furnishing to be created bespoke for the apartment, including mirrored cabintry with brass handles, black and bronze carpet with brass trim for the grand drawing room, fitted wardrobes and Venetian plastered walls for the guest bathroom.

The fireplace, oak parquet flooring and original sash windows remain to give a sense of the property’s grand history. Westbourne Terrace, named after the local River Westbourne, was one of the grandest streets in Bayswater when it was built in 1840, home to Admirals and Lord Chancellors. This flat is converted from one of a long row of white-stuccoed, four-storey terraces, with pillared porches, facing carriage drives. A few minutes’ walk from Paddington station, with its direct links to Heathrow Airport, it comes fitted modern luxuries such as underfloor heating and a designated parking space. 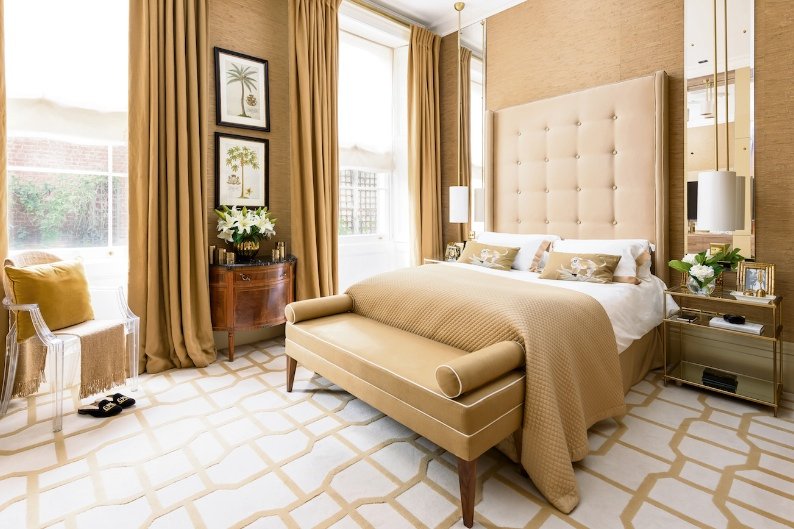 Selling agent Joe Le Beau from Berkshire Hathaway HomeServices Kay & Co, says it’s rare to see an apartment ‘dressed to impress’ like this one and he expects it to attract an American or Middle Eastern buyer looking for a pied-a-terre.