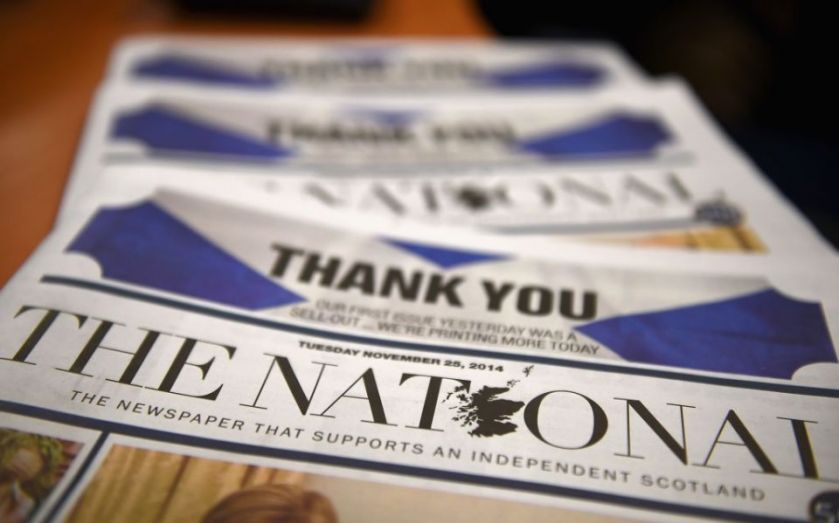 Scotland's first pro-independence daily is going double its print-run after selling all 60,000 copies on its launch day.

The National had its first print run on Monday and was launched by Newsquest's Herald and Times group. The paper is running for five days to test demand.

The paper's editor Richard Walker, who also edits the Sunday Herald, had planned an initial print run of just 30,000 copies. However, speaking to MediaGuardian, he said:

We decided almost as we pressed the button [on the launch] to double that – in hindsight, a good decision.

The paper retails at 50p and the banner reads: "The newspaper that supports an independent Scotland".

The 32-page paper has upped its print run to over 100,000 to keep up with Scotland's demand for pro-independence news and comment. But it's not just in the world of print the paper is having success – roughly 10,000 digital subscriptions have been sold at £1.50 a week.

It is really gratifying that so many people responded to it even before they had seen it. We were getting digital subscriptions at a rate of about 20 a minute over the weekend, before the paper had even come out.

For now, the paper's future hangs in the balance, with Newsquest set to make a decision later this week whether to continue The National full-time.

Membership of the SNP has skyrocketed to 80,000 since the referendum and polling from YouGov suggests if Scots voted again, they may vote for secession.